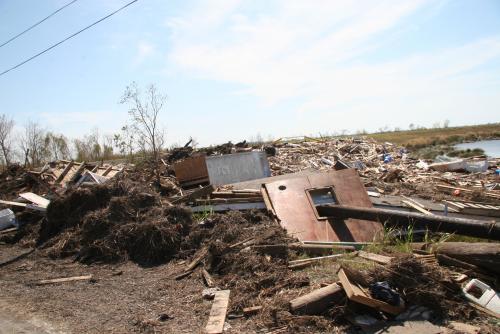 It was 9/11 and I was sitting here with the two puppies reflecting on how, because the tragedy was instantly misappropriated for cynical political purposes, we have never really considered the true human price that was paid that day. We;ve never let it soak in, we've never properly mourned. We've never faced it with our hearts and we've never sought thoughtful and proper remedies for this very large problem. We just went for the quick fix of blind vengeance and in the process, became everything we supposedly stand against. Just then a loud bellow arose from the yard. I looked out and there stood A. Whitney Brown, no doubt a few steps ahead of the reactionary lynch mob that formed last month in response to a brilliant piece of political satire, hoping to wish him a Happy 9/11!

All meaningful work for the day was postponed due to convulsions of laughter. If Larry Craig's ears were burning it wasn't necessarily because he made the acquaintance of a gentleman wearing corduroy trousers.

This morning I have the puppies distracting Whitney so that I can get at least a little something on the site. The rest of the day will be spent doing manly autumnal things like chopping wood and emulating Larry "stallcock seeking stud" Craig by not being gay. Something about wood and wide stances.

Could Bush and his core supporters (AKA/ the Psychotic Reactionaries) be any easier for Osama bin Laden to manipulate? I've seen kindergarten classes with more resistance to obvious ploys.

For a Muslim, bin Laden sure has no qualms about employing ham-handed reverse psychology. The crap the al Qaeda leader pulls is right out of the B'rer Rabbit playbook. Osama doesn't want the US to pull out of Iraq because American presence there is the greatest boon to his cause he could ever imagine. So anytime a moment arises when there's even the slightest possibility of a US pullout, bin Laden makes a new DVD for his box set -- " Get out of this Briar Patch!"

Bush and his minions immediately respond with predicatable bluster about how "we can't let this animal have his way. In fact, we won't!"

The only person alive with more pig drippings on his fingers than bin Laden is Bush himself. We waited breathlessly for months for the mythical Patreus report that was due "sometime in September." And surprise, surprise! Sometime ended up being Sepetmber 10 and September 11. As in "9/11." What a coincidence! And a timely reminder, too!

Bush's greasy fingerprints were all over Petraeus's remarks. The general thinks the surge is working so well that we should keep it up until next year.

So what if something that lasts for a year and a half is poorly described as a 'surge?'

When people think of surges, they think of things that come and go rather quickly. Like a storm surge or an electrical surge.

If either lasted 18 months it would be an indication of very, very serious trouble.

Which is exactly what the United States is in, in Iraq.

And in perhaps the most ham-handed of all the assertions in this week's BBQ of reason, Petraeus and Bush are selling a vague promise of a return to pre-surge troop levels sometime next year (and you can bet the ranch that it won't be on 9/11 but it will be before the election) as if it's a moderate and thoughtful plan.

Yeah, thanks a lot for planning to return the number of Americans in Iraq to a level two-thirds of the country found unacceptable before your mislabeled surge began.

And by the way, it's not even an option because by next year they won't have the troops necessary to keep that level of troops in the field.

And while I'm caterwauling, screw this crap that expects us all to genuflect at the altar of Petraeus's and Crocker's integrity.

Petraeus and Crocker are classic Pentagon and State Department careerists. When the odor becomes too fetid for even veteran suck-ups to hang around, it's time for these guys to put on gas masks and move up in the ranks. These two mealey-mouthed lackeys should have been forced to walk into those hearings literally carrying water, just so everyone had a good idea what they were there for.

When someone was talking about Patraeus putting his "life on the line" Whitney said "Who was the last American general to be killed in a war zone? Custer?"

Unlike the politicians who metaphorically hide behind the grunts, Patreaus literally lives behind a human shield of GI's.

He's an opportunist and after listening to him for two days it's clear he's either delusional or a compulsive liar.

He and Crocker are administration bootlickers and there is nothing noble or beyond reproach about that.