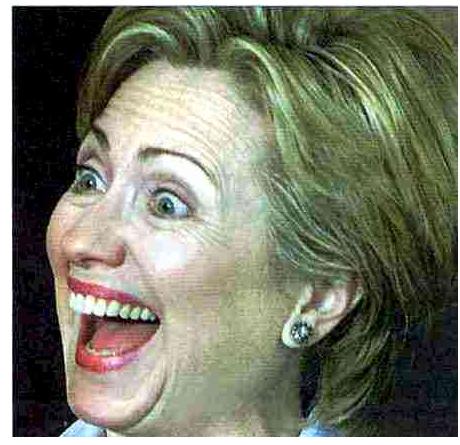 Hillary Clinton: all the sincerity of a telemarketer.

OK, this two puppies at once thing is even more ridiculous than I expected. Nevertheless Letty and Lu are doing great. I, on the other hand, have a life expectancy of about three weeks. Nevertheless I have stolen the time to scribble the following complaints....

And now a tougher question: what's right with it?

Clinton (D- Ark/NY -- R-Ill/Ma), the first woman to attempt simultaneous favorite son status in four states, also received the endorsement of Debbie Stabenow of Michigan, the principled legislator who stomped the Detroit newspaper unions on her climb to national obscurity.

I have twice appeared at events with Stabenow and twice found her to be an extremely inspiring. Both times I heard her speak it took her under thirty seconds to make me feel like killing myself.

And the Clinton endorsement from Clark was no small deal either. He was, without question, the best general running for president in 2004.

Ironically the duty-shirking chickenhawk who "won" in 2004 ended up abdicating the presidency to a general.

Or at least he wants us to think he did.

Bush believes Americans are afraid to question orders given by a general. Democratic office-holders? Yes. Americans? Not necessarily.

Nevertheless Bush has tried to reintroduce the draft and conscript the entire nation.

Well I'm not taking the oath. I think Patreaus is a four-star bootlicker. I plan to directly violate his commands. What's he going to do about it? Put a sharper crease in his trousers and wait for reactionary pundits to express outrage on his behalf?

If Bush wants us to take orders from the military then I suggest he first declare martial law.

Even though I wrote the same stupid pun on this blog several weeks ago, I disagree with Moveon.org's ad that called the  Junta's new commandante "General Betrayus" because for someone to betray you, he has to have been on your side in the first place!

Quagmire 2.0 : How dumb does Bush think we are? At the very least, dumber than him,  which means his target audience is wearing mucous covered camo and feeling pretty good about the new middle ground his court-appointedness has offered the nation. And what a compromise it is! "Next year we'll drop back to last year's troop levels and you'll all thank me for it or I'll have you thrown in the brig for insubordination to General Patraeus." I guess he does need to keep troop levels high -- especially considering all the soldiers it will require to simply hand over the gigantic bag Bush's planning to leave behind for his successor.

a million or so dead Iraqis

a bankrupt nation, strip-mined of all civil liberties

financed at subrpime rates with bubble payment due Jan 21, 2009.

Here's the promise Bush includes with Quagmire 2.0: Next year, after we've sunk in six to ten feet deeper, we'll remove eleven inches of the quicksand!

We will then airlift the quicksand to the United States for use in our prison exercise yards.

Prisons that will house plenty of Iraq war vets, who will know how to move around in such muck.

And now, back to the Democratic frontrunner...

Hillary Clinton is going to announce her universal health INSURANCE plan today. It would require all Americans to have some sort of health INSURANCE, bought from a private INSURANCE company If someone can't afford INSURANCE then the government will help pay for it.

Corporate profits come first -- it has always been thus with the Clintons. Why do you think Bill spent every New Years Eve walking beaches with the captains of industry.

Now GM is telling the United Auto Workers that the union must fall more in line with Japanese auto manufacturing labor costs. Just one problem-- Japan has national health CARE and GM would, without question, deficit spend to finance any candidate running against someone advocating a single-payer plan.

Even with all the horrendously stupid management decisions the Shrinking (formerly Big) Three auto manufacturers have made (thank goodness for big screen TV's or they wouldn't be able to advertise all those SUV's) Detroit would still be profitable if it didn't have to provide health INSURANCE for its workers.

This economic reality would apply to almost any other industry you can name. Of course the industries might have to actually start paying some taxes -- but when compared to the cost of keeping the health INSURANCE racket obscenely profitable, they should smile when they sign their tax checks.

Clinton's plan guarantees no one anything -- except health INSURANCE racketeers. It promises them that not only can they keep shaking everyone down but that they can do it and receive a swell government subsidy to boot!

This is just another glaring example of how Hillary Clinton will represent the corporate interests while pretending she is really looking out for the common person. What a fraud!