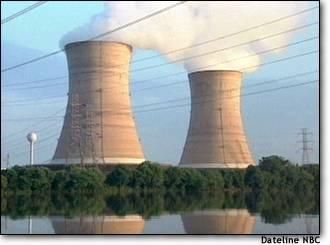 Radiocative Waste Production Facility in Action fighting for our environment!

Polluting industries never really lose a fight, they just resume it again a bit later. For instance, even though everyone with a brain knows that coal is a filthy substance, we now live in the era of "clean coal." Why? Because King Coal hired shameless and soulless PR hacks to spin the obvious truth about this resource that is only good for the environment when it is left in the ground.

The only shills ever suggesting there may be a problem with coal represent other environmentally malicious industries-- in particular the nuclear industry-- which has suddenly decided to recast itself as 'green.' Fluorescent green, maybe... but environmentally green? Tell it to the people near the Hanford Reservation of Rocky Flats or Fernald or Savannah River or Oak Ridge. Tell it to the people who have lost children in the cancer clusters that surround numerous nuke plants. Nuclear waste is carcinogenic. There is no safe way to transport or store it. The climactic shifts that are occurring will result in major changes in where ground water flows and so underground storage of this poison is dicier than ever.

Nuclear waste is a lethal legacy to leave behind for an uncountable number of generations, if in fact humans even have that many generations left.

Nevertheless, on CNN this morning, vapid anchor John Roberts kept saying that planned nuke plants in Texas are meeting few objections from environmentalists because they're now less concerned about nukes than they were in the past.

This raises some questions:

First and most obvious-- is that so?

Who the hell is John Roberts to summarize environmentalists' views and then act as the spokesperson for the cause?

Even if he believes this nonsense-- how did he reach his conclusion? What was his methodology?

You don't suppose Roberts, an emptier vessel than a swan boat in January, was handed a nuke industry press release featuring some quisling in drag as an environmentalist extolling the virtues of environmentally friendly radiocative waste production facilities, do you?

There must be Texas groups fighting this. What do they have to say? Does CNN have no one down there to go ask a few questions?

In fairness, it must be added that this morning CNN was the perfect place to go to forget there are any hostilities occurring in Iraq, much less Afghanistan.

In the 90 minutes or so I had the alleged news network tuned in, it didn't even manage to mention some stories that dominated the front page of the mainest of stream New York Times.

No mention of the State Department's obstruction of a congressional inquiry into Blackwater's corrupt and barbarous dealings in Iraq.

No mention of the new campaign by Sunni insurgents to liquidate a wide array Iraqi public officials.

No mention of the Times story about how,