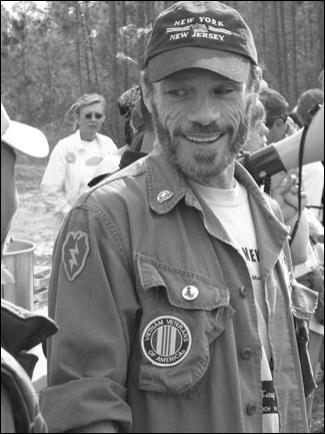 One of the worst things about war is that many who have stood courageously against such barbarism, die before it can be ended. Some of those people are the direct victims of the current war. Many others had learned from earlier wars that armed conflict does nothing but perpetuate armed conflict.

We've just lost such a person in Dave Cline. Dave was the first president of Veterans For Peace, a founding member of Vietnam Veterans Against the War and a founder of the Vietnam Agent Orange Relief & Responsibility Campaign. He was also a former fifteen-year union rep and eventual vice-president of the Transportation Workers Union Local 600 in Jersey City.

In 1967 Dave was sent halfway across the world to participate in the needless and obscene Vietnam War. During his time there he recieved three Purple Hearts and a Bronze Star with a "V" for valor in combat. On his last day of combat duty Dave Cline had an epiphany when, after a point blank confrontation in which he killed a Vietnamese soldier, he lay seriously wounded and pondered both his own and his deceased adversary's lives until he was finally med-evaked out the next day. He came home permanently disabled -- his knee had been shattered in the last firefight. Back in his hometown of Buffalo he took up support for his brother Bruce Cline and his fellow Buffalo Nine war resistors, who were facing the wrath of the nation for which Dave had just been wounded three times. Still technically on active duty, Cline went to Texas where, even before his discharge from the Army at Fort Hood, he began publishing the underground paper Fatigues. Upon his formal separation from the armed service, he opened a coffee house for dissident soldiers outside that Lone Star base. Dave then became an early director of the VVAW and remained in the first wave of the peace movement until his death last week.

I'm proud to say he was a friend of mine. I always knew I was in the right place if Dave was there, too. I met him during the dark days of the Reagan regime, when we were desperately trying to raise American awareness about the terrorism being committed in our name in Central America. We stood together on many other causes.  I was never surprised to get a call from Dave looking for input and support for his latest attempt to end the madness of war. In 2005 we spent most of August together in Crawford, Texas, where we proudly supported Cindy Sheehan and all of the veterans and other citizens who took the stand that gave George W. Bush a shove down a slope that was soon made slicker by Katrina. Several times while we were down there Dave and I commiserated about how profoundly sad we were to see another generation get strangled by the tentacles of war.

Last year Dave and I participated in rallies in Buffalo and Niagara Falls, Canada in support the current soldiers who have left the United States and headed north because they refused to participate in the current war. As we watched an Iraq Veteran Against the War speak eloquently of his experiences and enlightenment, Dave turned to me and said, "I wish to Christ this kid never had this done to his life."

No one knew better than Dave Cline what that kid faces. As a Veteran For Peace, he understood how much this new generation of physically, emotionally and spiritually damaged vets will be up against. He knew how they'd have to fight their government for care and support they should never have to ask for. He knew how their personal lives would be haunted by both their war experiences and then guilt for acting out in compensation for chronic pain of every description. He knew that they would lose several more of their comrades to suicide and substance abuse and several more to medical complications brought on by toxic substances introduced to their bodiesduring military service. And he knew how each new war would tear open even the thickest scar tissue covering their emotional wounds. Dave self-medicated his own pain with alcohol and that's what they say killed him. The truth is he was doomed years earlier when he was conscripted to go commit unspeakable acts against the Vietnamese people.

As I wrote a few years back, wars are easy to start but impossible to end. Even when the hostilities cease, the lifelong ramifications of war's horror continue to vibrate within not just the war's veteran's but their families, friends, hometowns and nations. No healing can have any real chance of beginning until the combat ceases. The cessation of such hostilities was what Dave Cline didn't see happen during the last war he couldn't stop in a lifetime fighting for peace. I'll miss you, my brother.