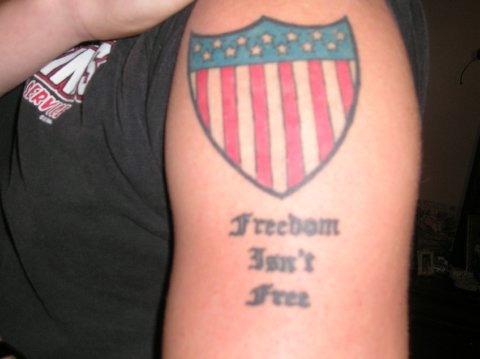 ...then I suggest we liberate it.

Well then I suggest we liberate it -- particularly from authoritarians who have no problem using the word to promote anything but a free expression of ideas and principals.

Unfortunately Freedom's Watch, the non-profit astroturf-roots group demonstrates that this slogan is at least, partly true. Because freedom sure is shackled so long as it remains vulnerable to semantic theft by a group of over-funded under- principled White House functionaries.

According to the New York Times< Freedom's watch was founded to counter more legit grassroots efforts like those of moveon.org. It's said each of its first dozen members donated at least million dollars to the cause. Freedom's Watch represents a diverse array of extremist reactionaries.

You can bet this much: the official timepiece of Freedom's Watch is a Rolex.

The group brags that it can "easily' raise $200 million for the 2008 election. Get ready for swiftboats that travel at warp speed.

Their first TV spots appeal to the knee-jerk stupidity of the politically illiterate.

One shows a still photo of the second jet heading into the World Trade Center with the superimposition of the menacing message: They attacked us before. They won't stop in Iraq.

If you need me to diagram the idiocy of that argument, you might as well use a credit card to donate some money you don't have to these political porkers.

No, freedom isn't free as long as it can be taken hostage by jingoistic oligarchs like the twelve economic thugs who started this bullshit organization.

Newt Gingrich has decided not to run for president. And after much consideration I must announce with a heavy heart that I will not be trying out for American Idol this year -- even though I have a better chance at winning that title than Gingrich had of taking the White House.

Did you catch the happy story about the Bush- Cheney admin's de facto decriminalization of environmental homicide?

Nothing like responding to a crime spree by pulling cops off the beat. And that's exactly what Bush has done with the EPA.

Texas is planning to go ahead with lethal injections even though the Supreme Court has ordered a stay of such executions elsewhere. So when will the Bush-Cheney admin send in troops to bring down this government that is willfully killing its own people?

Today's fun fact: Texas is the leading cause of death in the Southwest United States.

Wonderful news! Christianofascists are threatening to break with the Republican Party and start a third party if the Gluttonous Old Pigs nominate secular fascist Rudolph Giuliani for president. Won't it be fun watching the believers in "blessed are the preemptive strikers" as they attempt to balance themselves on the sliver of turf to Rudy's right!

Extra reading: Buddy Tom Duffy of the Garlic did some humorous extrapolation on my take about Huffpo's use of slavery as a financial model.

There was a major crash adjacent to Laguardia yesterday. Fortunately it was only the New York Mets that plummeted to the ground before exploding in a fireball that was viewed by the entire baseball world.

I never liked the Mets. I was nine years old and already a Yankee fan when they came along so I just couldn't figure how an expansion team that sucked could be anything but impertinent. I knew the Dodgers and the Giants had abandoned the boroughs. I knew of Jackie Robinson, Roy Campanella, Don Newcombe, Monte Irvin and Willie Mays but by the time I came along the Yanks (finally) had Elston Howard and I hadn't realized how late they came to baseball's integrated table. As a fan of the great Ernie Davis (Syracuse's Heisman Trophy winner who was the first African-American to receive the honor) I was colorblind to everything but the hue of uniforms. I also didn't fully grasp why so many people preferred the more integrated National League over the American League.

Although I had a warm spot in my heart for the first Mets manager, Casey Stengel, I found Mets fans and their signs, the team's quadruple colors (orange, blue white and black) and the fact that they actually wore pinstripes, just plain gauche. The long and short of it was I was never going to be a Mets fan. Before long I responded in kind to the hatred expressed for the Yanks by Mets fans. Over the years I have given as good as I have gotten to and from the denizens of the pride of Queens. My favorite way to silence a Mets fan was to offer this simple way to distinguish between the to New York major league teams: The Mets are the team with the 26 uniforms and the two championships; the Yankees are the team with the 26 championships and the two uniforms. That said, time passed and I grew tired of the trumped up animosity between boosters of different teams. I realized that all fans were about the same. I became a Yankees fan when I was five years old. To get upset with me about my baseball loyalty is to become angry with a five year-old with a hat on. To get upset with someone else for rooting for another team is to do about the same thing. So these days I root for my team and sportingly wish good luck to yours. If yours wins, good for you. If mine loses it is not any more of a reflection on me than if they win. So unlike millions of people, Itake no joy this morning in the misery of Mets fans. I know, at least to some extent, how they feel and I sympathize. It would be a poor reflection on me to rub it in. It would also be a tragic affront to my own sports karma. So Mets fans, you have my sympathy and even though it will be a long winter for you, spring will come and hope will return with the crocuses. In the interim, anyone who decides it's appropriate to compound your agony will have done something that reflects upon them in a way that the success or failure of a team they support never could. See you next year.