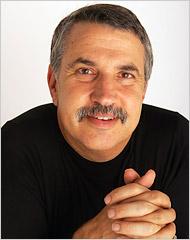 Not even Bechtel could enlarge this orifice

There is no more glaring and obvious insult to our national intelligence than the rhetorical flatulence of New York Times columnist Thomas L. Friedman. Every now and then otherwise lucid individuals tell me they admire Friedman. Such irresponsible statements damage, and sometimes even end, long-time friendships.

Normally I can only read a paragraph or two of Friedman but today I suffered the full limit. It will be weeks, if ever, before I recover.

In column after column, Friedman proves that if you put too much cement in anything, you end up in debasement. Consider this statement concerning an Onion satire of Rudy Giuliani's shameless milking of 9/11: Like all good satire, it made me laugh and cry.

If this piece was so magnificent he should have mentioned it back in February when it originally ran in the Onion. In any case, the idea that someone unaware that he himself is a joke would hand down a decree about humor incited me to forge on and read the entire column. I've been writing and performing what has been labeled by veteran media observers as 'good satire' for over 30 years. Far be it from me to challenge Friedman's authority on this matter just because he doesn't know his ass from the back porch when it comes to humor. Smug, self-satisfied, money-marrying pukes rarely do. In my decades as a humorist, I almost never brought audiences to tears. Believe it or not, weeping audiences are bad for a satirist's business. Every now and then I'd hit deep emotional chords with the folks but most of the tears I brought were the result of people laughing really hard at satirical assaults on buffoons like Tom Friedman.

Friedman's stock in trade is the grand pronouncement so let's play some fair turnabout on him. Like all bad columnists, Tom Friedman makes me wretch and heave. Nah, I can't do it. As a rule the Times pundit only provokes physical illness when I see him blathering to worshipful fellow hacks on TV. Sorry but accuracy matters to me regardless of how much swaggering I must sacrifice. Anyway, here's the upshot as plainly and honestly as I can put it: Tom Friedman couldn't be a bigger asshole if Bechtel was hired to bore the orifice.

Perhaps best known for his book The World Is Flat (and so are your brainwaves if you buy into Friedman's love letter to globalization) this morning he issued yet another edict after the pronouncement that made Pudd'nead Wilson into an opera. He thinks it's time we got over 9/11. I'm several years ahead of schedule on this one. The events of 9/11 were horrible atrocities that were compounded when nitwits like Tom Friedman applauded the massacre of more innocents in retribution for the massacre of innocents. It's all too horrible to escape but I've never based my existence around these outrages. I guess I'm just not moral enough to be either terrorist or warmonger.

The histrionic Friedman claims to have been brought to tears twice in the first four paragraphs of today's column. First he wept because of the Onion's Giuliani piece and then he cried for the victims of 9/11-- right after he said people should stop exploiting 9/11. Like the White House, it seems Tom Friedman is exempt from his own directives.

In today's outburst, Friedman says he won't vote for a '9/11' candidate,' just a '9/12' one. Friedman's groundbreaking proposal? We must pretend that 9/11 was an entire 24 hours ago. Funny, I had it clocked in at just over six years.

In explaining the concept of the 9/12 candidate as if it is so complex only he can demystify it , Friedman begins by asking: What does that mean? This: 9/11 has made us stupid. I honor, and weep for, all those murdered on that day. But our reaction to 9/11 - mine included - has knocked America completely out of balance, and it is time to get things right again.

Yours included, Tom? Say it ain't so! Friedman knows nothing of jokes but he sure can make you gag with crap like his ham-handed installation of the "mine included" escape hatch. (I mean after six years of being wrong, the guy takes absolute minimal responsibility by sticking two words between two hyphens. Now there's some tough self-love!)

He's proactive, well not really but it's the kind of term that sounds good in a boardroom so we'll let him assume the label and consider his ideas.

Step one: we must weep at more satire! Do the right thing, America -- go back and ruin your old copies of National Lampoon with tear stains.

Step two: we need to double-check the genesis of our national stupidity. After all, on 9/10/01 George W. Bush was already the president, Giuliani was already New York's mayor and Friedman was already a respected columnist in America's "paper of record." So we didn't exactly come into this as a nation of brooding intellects, now did we?

His column continues and only get worse because it's Friedman. Consider this for doubletalk: It is not that I thought we had new enemies that day and now I dont. Yes, in the wake of 9/11, we need new precautions, new barriers. But we also need our old habits and sense of openness.

So what we need are are new, open barriers? And 'sense of openness' is classic huckster buncumb. He believes when we can keep barriers but feel like we're still an open society then we'll have reached the ultimate goal.

Tom goes on to enlighten us thusly:For me, the candidate of 9/12 is the one who will not only understand who our enemies are, but who we are.

My candidate will be the person who realizes that lunkheads like Tom Friedman are the enemy.

Then in a breathtakingly stupid assertion Friedman says,I will not vote for any candidate who is not committed to dismantling Guantnamo Bay and replacing it with a free field hospital for poor Cubans.

Setting aside the astonishing suggestion that we close an entire bay, it must be pointed out that Cubans have national healthcare! What an oaf! Let's get past our national obsession with terrorism and instead red-bait Cuba by showing up Castro with some good, old-fashioned American socialized healthcare! Christ, does anyone edit this moron?

Never done, Friedman imparts: Before 9/11, the world thought Americas slogan was: Where anything is possible for anybody.

Most people would have a hard time putting the entire world's view of the United States into one hollow phrase, but not Friedman! Emboldened by his own bullshit, he adds: But that is not our global brand anymore. Friedman must always remind us of his understanding of markets and so he turns the last six years into a simple packaging problem. He then plays the blind pig and offers an almost good line: Our government has been exporting fear, not hope: Give me your tired, your poor and your fingerprints.

Unfortunately he tells us that the problem is, that BIG Brotherism is hurting our tourism industry and that not enough business travelers are coming here anymore. So forget the fact that the rest of the world despises us for serving as a corporate kennel's dogs of war, the problem is it has hurt our marketability.

The most egregious paragraph in Friedman's condescending, self-important, droolingly insipid column follows: Id love to see us salvage something decent in Iraq that might help tilt the Middle East onto a more progressive pathway. That was and is necessary to improve our security. But sometimes the necessary is impossible  and we just cant keep chasing that rainbow this way.

Salvage something decent in Iraq? WHAT "was and is" necessary? The necessary is impossible? We're chasing fucking rainbows? Rainbows??!!As I write this I;m just barely recovering the power of speech after exposure to such lethal concentrations of arrogance and foolhardiness.

Friedman never once considers that part of the reason business travel to America is down is because we're slowly but surely moving to a place of economic irrelevance. What do we make here anymore other than weapons that can no longer win wars and ersatz reality shows? Is it any surprise that at the close of business on Friday the Canadian loonie was worth more than the American dollar?

Friedman's bloated rhetoric always goes off on inane side excursions. Today he felt it was incumbent upon him to inform us: I still cant get uninterrupted cellphone service between my home in Bethesda and my office in D.C. But I recently bought a pocket cellphone at the Beijing airport and immediately called my wife in Bethesda  crystal clear.

Leave it to TLF to identify our biggest problem as interruptions in his subjecting others to the sound of his droning voice! Bejing is a major city and cell phone reception is good in major cities. I'm just guessing that you wouldn't have to get too far before you start dropping some calls outside Bejing. Not too many 30 cent an hour factory workers are concerned with cell reception. And by the way, what cellphone doesn't fit in a pocket these days? Doesn't anyone have a blue pencil at the Gray Lady?

Near the end of his column, Friedman returns to an impassioned plea for friendlier fascism by asking: If Disney World can remain an open, welcoming place, with increased but invisible security, why cant America?

Well Tom, it's because Disney World is a false place. A place with 'a sense of openness' that's phony because the park is rife with electronic spying equipment, undercover security and a strict policy of enforced, uniform behavior. I hate the thought of driving past Disney World, much less paying to enter it. I'll be damned if it becomes the template for this country.

This piece was nothing more than Friedman's attempt to hammer through a blanket amnesty for himself and the media-ocrities responsible for years of cowardly silence about a hijacking that has sabotaged our nation much worse than those that took place on 9/11. The idea that we can dress up authoritarianism in some nice autumn colors and then move along pretending that everything's OK is a dereliction of journalistic duty. Worse, it is a shirking of the duty any citizen in a democratic nation should and must assume.