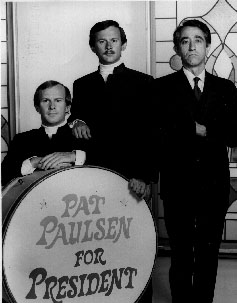 The Smothers Comedy Brothers and their favorite son.

Today, because I'm fighting both a bit of a cold and the concerted efforts of two rambunctious puppies, I offer the blog equivalent of a 'clip show.'

I admire Stephen Colbert. His turn at the 2006 White House Correspondents Dinner was as legendary a feat of political humor as we're likely to see for a very long time. I rhapsodized about it in the July 2006 Boston Phoenix piece What Smell?

The White House Press Corps annual dinner, in April, was memorable for two things. The first was George W. Bushs de facto confession that he couldnt even appear as himself without the use of a stunt double. Better yet was the way satirist Stephen Colbert landed a twofer on both Bush and the assembled media by pointing out the Cheney-orange bulls-eye on the presidents smug puss. He then effortlessly hit the target with a barrage of material that garnered some laughter and much cowardly silence.

The story was quickly spun by mainstream-media members, who explained away their own weak-kneed response by informing us that Colbert bombed. Like hell he did. A huge portion of the nation roared approval when it either watched him on C-SPAN or saw or read his remarks online. The biggest laugh of all came when Bushs talking-head defense team agonized over whether Colbert had gone too far by smuggling truth disguised as satire into a gathering of media and politicos in Washington, DC. They were also concerned that the president was subjected to 15 minutes of public discomfort as he sat trapped on the dais, characteristically devoid of an exit strategy. While the most powerful mouse in the world sat glowering, the courageous Colbert stayed in character and on point. The only way that quarter-hour could have been more magnificent would have been if Bush had been forced to watch the Comedy Central star while treading raw sewage in the New Orleans Convention Center.

In Shumucks Unlimited a Phoenix piece from a few months earlier, I made it clear that I would never embark upon what Colbert has just announced: a fake run for the presidency. Instead, I may have already begun a quest for the highest office of all.

Its high time to try something  anything  to stop this runaway Humvee of a nation. This may involve personal sacrifice, even my own. The hokiest, most obvious ploy a political satirist can make is to run for office. In my 30 or so years putting the needle in those who turn the screws, Ive never resorted to such an obvious and predictable stunt.

But this is the era of the new low, and so for the good of this nation and world, I am considering forming a committee to look into the viability of a run for unitary executive of the United States.

Further, I am appointing my friend A. Whitney Brown to head up a one-man search committee for vice-unitary executive  arguably the more powerful position. Inside word has it that Brown may well finally find himself in this endeavor.

The presidency was just too damned limited in the past. Now that its no longer encumbered by all that constitutional rigmarole, it holds an allure I cannot fully resist. George W. Bush has redefined the task. Now that its become the job of a unitary, no-count, unaccountable idiot, I feel almost overqualified. But my nation comes first, and I certainly wont be the first underemployed person in the land.

The important difference between me and Bush is that, as the head of Schmucks Unlimited (Copyright 2006 Dick Cheney), my unbridled power will be employed for the common good and not the private interest. When I tell you I can be trusted, it will be the truth, unless of course you are a weapons manufacturer, pension thief, corrupt mining concern, neo-con kool-aid chugger, Christian who would make Jesus puke, stock-market hustler, Iraq optimist, carpetbagger bottom-feeding anywhere near the Gulf Coast and New Orleans, bigot, prison-industrial-complex profiteer, global-warming accelerator, health-care pimp, church-state integrationist, Big Oil Whore, member of the DLC, downsizer, Bill OReilly, science-baiter, terrorizer and/or murderer of innocents anywhere, or anyone involved with that horrific music on Suzuki commercials.

So about 92 percent of you have nothing to fear from a Crimmins unitary executiveship; the rest are advised to familiarize themselves with the lyrics to Positively Fourth Street.

One more thing: no more wiretaps. I wont spy on anyone because the guilty are as obvious as a political satirist faking a run for office.

Ill be making an announcement soon, but only on a need-to-know basis. I even have a campaign slogan: Crimmins in 08  What are you gonna do about it?

Considering Colbert's talent, resources and popularity, maybe he'll pull off this hackneyed stunt in a manner that recalls the late, great Pat Paulsen. Even if he succeeds, enough already with the fake runs for office. We need them about as much as we need another British comic in drag. It''s been done and done it should be.