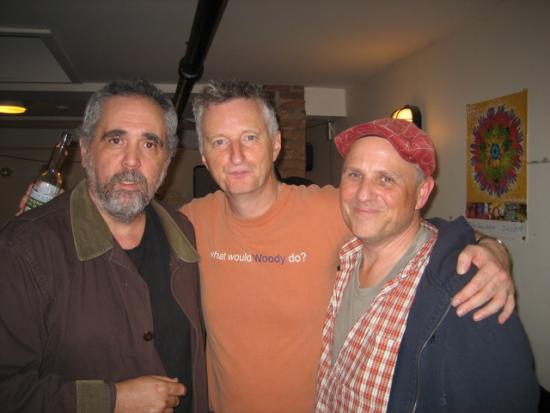 Realizing that's there's more to life than following the missteps of alleged leaders like Larry Craig, I was feeling like it was time to get away for a day or so. Just as I was thinking this a PT Cruiser pulled up. I said to myself, "Why would some desperate middle-aged person stop here?"

The door of the silly vehicle opened and out hopped old pal Bobcat Goldthwait. Assigned the car by an incompetent rental agency, Bobcat drove off in irony and impudence rather than waste any more of his precious time attempting to obtain a more suitable carbon footprinting device. He then lit out for my rural home and upon arrival, suggested I pack a grip because we had somewhere to go.

A few moments later, two men whose liberation was in large part due to their ability to market their respective pronounced senses of sarcasm, were driving down the highway ooohing and ahhing the peak foliage. Five or so hours later, they pulled into Northampton, Massachusetts, where the marquee on the Calvin Theater was resplendent with the name of the Bard of Barking his ownself, Mr. Billy Bragg.

Slipping around to the stage door of the theater, Bobcat and I did soon cross paths with none other than Vaughn "The Rocket" Martinian --noted DJ and American left-hand man to visiting luminescent socialist songsters.

The Rocket was followed into the backstage area by engineering wizard and all-around bon vivant, Grant Showbiz. Revelry ensued. Soon the Bard arrived to make the reunion complete. A pleasant visit continued to improve until it was decided that the evening required a highlight. Consensus was soon reached that the best way to meet this goal would be for Billy to subvert and entertain a crowd. As fate would have it, one had assembled in the house of the Calvin.

Well we made the right choice because Braggy was never better. His warmth and wit, and social, political and romantic insights merged with his considerable musical talents to make the evening memorable for those who had the good fortune to wander into that house of that theater on that night. But that's not all...after the show we again slipped backstage for more revelry with Vaughn, Billy and Grant. Several other subversives trickled through an extensive security check (there was a mental detector that screened for brainwaves) to augment the gathering. Further frivolity ensued. The only sad word of the night came too soon. It was "farewell."

Luckily for me I was lodging in the same facility as the esteemed director, Mr. Goldthwait. The balance of the evening was consumed in his august company and then Friday morning it was back in the car and on the road. More leaves and much discussion of his next several film projects made the trip end too soon.

It was a lovely respite from the daily drudgery of watching C-SPAN as if it were a security monitor. I am now back at my post, restored and reinvigorated thanks to a reunion with relevant artists, more vital than ever in an era of reactionary ruin.

PS- No one won the soy cheese so five dollars was awarded in the name of the Milkman of Human Kindness to a busker in front of a Northampton burrito stand.

PPS- Billy has a new album due after the new year (he previewed some of the new material and it's great).He has two dates left on his mini-tour

And if you haven't yet seen Bobcat's brilliant Sleeping Dogs Lie, track it down and see it. It's the most unexpectedly touching film ever. Hilarious, too!