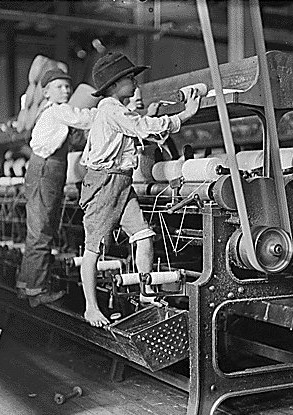 Way back when, the United States wasn't hamstrung by laws that now deprive children of some good honest work

Children as young as ten have been found working in sweatshops in India that supply Baby Gap stores with darling attire for our toddlers so it's safe to say the labor Baby Gap has been spanned.

Gap spokesperson Merle A. Biss said that while the corporation was surprised that its Indian suppliers were using child labor working in circumstances that were described as "near-slavery," it should be remembered the juvenile near-slaves were only working on garments for Baby Gap and not sewing items for adult wear, "because that would be wrong."

And how could The Gap have known such a thing might thing happen, especially in India, the child labor capital of the world?

Biss said, "It was so obvious that we just never expected it to happen. But it's not all bad, our children's line is snugger and more comfy than ever. After all, who knows what kids like better than other kids?"

The Gap now faces the same problem that's confronted industry for generations. How can it keep its labor costs almost non-existent yet avoid the public relations stigma that's attached to the word "slavery?"

Wal-Mart has begun to tackle the problem in Mexico with its "volunteer labor force." Over 19,000 adolescents (as young as 14 but I'm guessing they aren't real strict about checking ages) bag consumers' purchases in hopes that they will receive a gratuity. Of course the Bentonvillle, Arkansas retail giant didn't just come upon the volunteers by accident or for free. No, Wal-mart spent millions buying politicians and fixing trade policies so it could leverage its suppliers into cutting their prices. Lower prices from suppliers are funded by lower wages to workers. This has led to competition between developing nations to see which could keep a work force up and functioning on the least amount of life-sustaining food while living in the most miserable conditions. Adults often reach the point where they'll refuse to simultaneously starve to death and work but kids are a different story. They have a better attitude.

The Walmart Mexican plan is brilliant in its simplicity. If consumers want such low prices, let them deal with the resulting beggars. And so Mexico has taken the lead in globalizing retail outlets -- but don't be surprised if you soon see beggar-baggers in a Wal-mart near you!

When you think of it, child labor is a natural offshoot of globalization. Global is meant to imply "all that's on the earth." And children certainly are on the earth, so why should they be left out?

Considering child mortality rates, without child labor, many kids won't live long enough to experience the feeling of accomplishment that comes at the end of a day of long and fruitless labor. Haven't the poor kids of this world been deprived of enough without withholding this one small joy from them?

Speaking of laborers, the US State Department is now forcing members of its diplomatic corps to serve in Iraq.

It sounds crazy but despite the new super embassy (including tennis courts that have been IED-free since late September); the vanquishing of al Qaeda and the quelling of the insurgency; the blossoming of democracy; exclusive private security provided by Blackwater and the chance to serve in the greatest mission in the history of our nation's diplomacy in service to our greatest president, American diplomats aren't volunteering for this plum assignment.

Perhaps they figure serving in Iraq would make any future assignments seem piddling and insignificant and so they're taking the long view and passing this chance of a lifetime.

Or maybe diplomats have lingering fears about the stockpile of Iraqi WMD's that has not yet been located.

Wait, I have it! They don't want to serve in Iraq because it's so close to Iran and only a maniac would risk life and limb by accepting an assignment next to such an obvious threat.

Those damned Iranians ruin everything! Something has to be done!

The only answer-- conquer Iran and build a second super embassy there. That way people won't have to travel all the way to Baghdad for all their super embassy needs.

In the meantime the State Department, already beholden to Walmart for the super embassy concept, should take another page from the conglomerate's book and develop a volunteer children's diplomatic corps.

They say children make the best ambassadors. It's time to test the theory.

And what the kids can't handle could be dealt with by another source of Walmart labor-- retired people.

Cut posh government pensions and before you know it we'll have more Green Zone Greeters than you can launch a rocket-propelled grenade at!