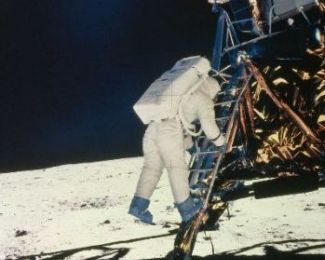 That's one small step for man... if you don't believe it,  go fuck yourself!

Conspiracy freaks, led by Air America's irresponsible Jon Elliot (and considering all the talented people who've lost jobs at AAR, why is this schmo working?), have set up Randi Rhodes to suffer a heaping helping of insults, piled on already serious injury. You people are unadulterated idiots. How about looking before you leap to conclusions? There's probably nowhere within five blocks of Randi's deluxe Park Ave address that isn't under redundant video surveillance. Had she been mugged, we'd have our choice of camera angles from which to review the incident. Now anyone to the left of Herbert Hoover is getting labeled as a crackpot because the off-their-meds crowd couldn't wait a few hours for a story to sift out. I'm sick of people who would rather argue paranoid theories about conspiracies than take positive action about easily provable offenses against humanity and the environment. When you go off half-cocked, like you did yesterday, you discredit even thoughtful theorists. Worse, you splatter everyone who isn't a stark-raving neocon with your irresponsible slime. Do everyone a favor and shut up and go away until you can prove something.

I'm not breaking any personal ground with the above comment. In early July I wrote a piece about almost daily showdowns I had as a boy with an incredibly abusive Catholic priest. The preface of the essay, available in full here, included a rather restrained explanation of my views on conspiracy freaks.

In my years of touring as a political satirist I've met some rather persistent members of what even I would call the fringe element. From followers of Lyndon Larouche, to members of certain communist cells (that would have even fewer members were it not for all the FBI agents in their ranks), to single-issue conspiracy freaks, to out and out cultists  if they were out there, they somehow found their way to my dressing room door.

When I meet an obvious conspiracy theorist, I'm polite and try to find some common ground. I give them a few moments and then move along to the next person. The biggest problem comes when they are persistent. Sometimes they damned near (or flat out) stalk me. They follow me around, force "documents" upon me and follow up with countless calls and e-mails. These exchanges begin with the presumption that their unedited treatises have moved me to dedicate my life and work to their singular focus. Although 'focus' is the wrong word here because the mountains of paper they thrust upon me rarely demonstrate the kind of pithy and irrefutable prose that's essential to open minds to concepts that run from plausible, to borderline loony, to literally alien.

When the most dedicated (OK, obsessive) of these people follow me, confront me and demand my detailed reaction to what are generally disjointed and often circularly reasoned theories, I become less and less friendly towards them. For starters, I'll ask, "Why am I suddenly so crucial to your cause?" This inevitably elicits a look of paranoia followed by a dawning and damning awareness that can be watched in progress on the crusader's face. They go from "oh no" to "ah-ha!" in a few seconds. On one memorable occasion I was actually accused of being involved in the cover-up of the JFK assassination. Since I was only a lad of ten when the deed was done, I guess my accuser assumed I was whisked off to a mind control camp, trained to become a political satirist and then planted at a Chinese restaurant in Cambridge, Massachusetts so I could set up a comedy club -- the perfect front for my nefarious role in the cover-up!

It's not that I don't believe in plots. I just believe there is so much evil being done right in front of our eyes that I have a duty to zero in on those issues. In this ill-informed society what I have to say seems fringy enough. Theres no need to go off willy-nilly, speculating my way to full-blown Henny Penny status. I stick to the facts -- satirized and hyperbolized facts, but facts, nonetheless. As the years have passed, many people have confessed to me they were skeptical when they first saw me perform or got to know me, or both. With the passage of time and as certain truths became more self-evident (tis the season!) many doubters have come to trust me. Therefore I feel an obligation to maintain a standard. If I can't prove it, I don't go with it. If I am speculating, I label it as conjecture. This has led to some discord with those who have questioned my character simply because I refused to leap to their conclusions.

This is not to say that their conclusions were wrong. This is not to say that these people are not sincere and dedicated and, in many cases, brilliant. It is to say that in a society that cannot see mass murder when it's committed before its very eyes, by its very government, getting people to believe in fantastic plots about deeds committed decades ago (or even just a few years ago), is a very time-consuming and relatively futile use of my limited time and energy.

My biggest problem with the conspiracy crowd is that they willingly cede almost supernatural powers to their enemies. I mean if everything is a plot; if every game is rigged, why play? I am a disciple of Howard Zinn's and as such, continue to do the work I do because of a belief that people can be brought to more enlightened views if they are informed in an accessible, fathomable fashion.

I'm sure that for the sake of doing the most possible of what I do best, I've written off some people who were on the path to remarkable awareness. But such people are like poets; you have to sift through an awful lot of crap before you get to the great stuff. That's why I leave the sorting of poetry to others and then just sneak in and read anthologized versions later. Mea culpa!