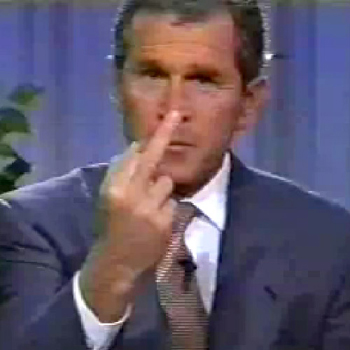 I got yer accountability right here!

Some days the best way to convey information and opinion is through clever satire or witty quips. Other days a more direct approach is required.

This is one of the other days. Yesterday George W. Bush, the worst unnatural disaster to ever hit the United States, toured the tragic scenes of natural and man-made California wildfires. He wasn't looking to ease the pain of the people who have lost everything in the infernos. No, he was looking to relieve the discomfort he's been forced to feel during two years of accountability concerning his abject failure of leadership during the delayed evacuation and weak rescue efforts followed by a largely incomplete recovery from Hurricane Katrina on the Gulf Coast. This dummy has been smarting since that storm surge of criticism in 2005. Yesterday he used the wildfires as a backdrop for announcing a  retroactive personal abrogation of responsibility as federal chief executive to lead relocation, rescue, recovery and rebuilding efforts at times of great national calamities... unless of course he likes the governor(s) of a ravaged region.

It makes a big difference when you have someone in the statehouse willing to take the lead, Mr. Bush said at a news conference, in an apparent dig at the Louisiana governor, Kathleen Babineaux Blanco, a Democrat. He also assured California residents, Were not going to forget you in Washington, D.C.

I do agree with this much-- it's especially important for someone to take the lead in a statehouse when there is no leader in the White House.

Like many other vapid Americans, Bush is comparing Louisiana apples to California oranges. Wildfires and hurricanes are two wholly different problems. No one in New Orleans could wait for the hurricane to arrive on a nearby hillside and then jump in a Range Rover and head for safety. (It's funny how people who own seven-figure homes tend to have their own means of transportation.) To make the two evacuation efforts even remotely similar, Qualcomm Stadium should have been set ablaze as the evacuees arrived. What's most telling about this mealy-mouthed, buck-passing outburst is that in it, Bush all but admits that he long ago forgot the people of the Gulf Coast. When he says, "We're not going to forget you." he's snickering at all those he has blotted from memory. It makes you wish it wasn't a federal crime to slap him in his smug face.

Once the major corporations got made more than whole, the insurance companies were allowed to slither away like so many bayou cottonmouths and federal relief funds were funneled to do-nothing cronies, Dubyahoo's work post-Katrina was done. Unless you consider it work to continue to punish the victims of initial neglect with compound neglect and I'm sure Boy Georgie doesn't. His unctuous demeanor towards Governor Shickelgroper couldn't be more obvious. It's meant to imply that all would have been fine during Katrina if only the residents of Louisiana had the good sense to elect a Republican action hero as their governator. The littlest president resents every last victim of Katrina because Katrina brought him embarrassment. Bush has long made it clear that he would rather others suffer and even die if itspares him from being held accountable for mistakes and misdeeds. Why do you suppose so many American troops are languishing in Iraq? (Not to mention the Iraqi people because to do so would be unpatriotic!) To withdraw from a calamitous war an occupation would be to admit to mistakes and wanton misdeeds. So some soldiers are now on their fifth tour of duty while Bush flies around California cheapshotting the victims of a hurricane. What a disgusting rich-boy punk! Bush also delivered a clear message to the fire victims: You'd better praise me to high heavens or I'll never follow through with any federal aid for recovery efforts. Back in the privacy of Air Force One I'm sure Bush cackled madly all the way back to Washington -- particularly when he flew over the Gulf Coast faster than the speed of lies.

Despite Bush's showboat promises and Ahhnald's saintly efforts, it won't be long before many California homeowners will be treated like cancer survivors throughout the country. They'll become members of the lowest caste of all -- the uninsurable . They'll be told that before their lives can be restored, they must  give up all they own. And while that happens, arrogant, grandstanding politicians like George W. Bush will be busy tending to their own personal fortunes, that needn't be insured because they are so constantly and obscenely replenished that the loss of a small thing like a domicile barely merits a second thought.

After Katrina many questioned whether low-lying New Orleans should even be rebuilt but in California, where droughts, wildfires, mudslides and earthquakes contribute to an annual ten-month toad and locust season, the advisability of reconstruction is rarely considered. But imagine how quickly they'd have built proper levees in San Diego if that was all it took to protect rich homeowners from further devastation.

Lurking about a nanometer beneath the surface of all this is abject racism. How many times have we heard there hasn't been looting in California like there was In New Orleans? It's funny how a wall of fire serves as a good deterrent to crime. It's also funny how if looting did take place in a fire-ravaged area it would be hard to tell because whatever gets lost at the time of fire, we figure was lost in the fire. (Note to insurance companies-- you don't suppose a few millionaires videotaped some belongings that they then removed from their homes but will still look to get replaced, now do ya?  Prepare early for calamity by looting in advance!) The idea that hillsides full of wealthy people are the domain of the spiritually pure of heart is beyond naive. A lot of the so-called looting in Louisiana was for things like bread, milk and water. In California evacuees could choose between all the whole grain or gluten-free, dairy or non-dairy milks and sparkling or spring water they wanted, not to mention plenty of organic apples and oranges. And good for them. If these commodities reduced agony of displaced people (none dared call