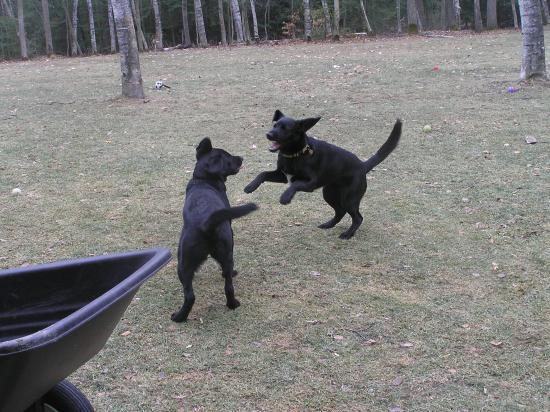 Lu and Lettie have their own debate

First, an apology to anyone who reads this blog soon after I update it. Until I get it online, I seem unable to overcome my snow-blindness to  typos, chunks of text left lying around after rewrites and out and out errors. On several occasions, I've rewritten an entire post and then posted the first draft by mistake. Once I get something posted, the mistakes become obvious-- particularly to my pal, John Joslin and my significant only, Karen Crist. So if you read a post and it's marred by some obvious blunders, check back in a bit because things tend to get fixed up. It all just adds to the authenticity of this effort, dontcha think?

Next up-- your comments. If you'd like to comment on any posts, you can by clicking the word "more" at the bottom of any post on the home page. On the blog page the option is automatically available. You just have to sign up once so we know you're not a spammer. I promise you, I do NOTHING with your info. I'm not the nosy type. I'm the lazy type, and typist -- but we already covered that.

I am about to add Google ads to this site to help defray some of the costs. If and when you see the ads, your clicking on them will earn me teensy stipends. So please check out anything that looks interesting. And please keep spreading the word about this site. It has been growing every month since last June when I resumed posting after an absence that began when I went to work at a certain radio network. It would be nothing without you.

Next case: we have been trying to add an interesting look to some of the graphics that accompany these posts. The photos are the work of the esteemed and reclusive, Red Bates. Let's hope he doesn't stop contributing because I named names.

I took the night off from watching Republicans and instead enjoyed Syracuse's 60-55 road victory over Depaul. (When is Hawaii joining the Big East?)

Anyway, I don't have a lot to offer today but these folks do.

Sam Smith of the Progressive Review  writes about John Edwards hidden problem. This is a very good piece. I especially like its analysis of smug websites.

Now that Edwards is gone, Margaret Kimberley feels we should disengage from the presidential race and focus on this Do List For Progressives

Dennis Perrin dances with glee (and sarcasm) at the possibility of a McCain-Clinton final. It contains a real nice reminder about certain realities concerning McCain's earlier years.

Rob Payne chimes in with this on the surge at a moment when that mythology needs to be shot down as if it's John McCain strafing innocents in Vietnam.

....who has become a major irritant with her girlish enthusiasm and goody bag of presidential anecdotes that she dispenses to humanize everybody on the same glorious continuum, as if the crimes and calamities of Vietnam and Iraq were crucibles of character-building for our chief executives, the crowded backdrops to personal tragedy and greatness. (So many faraway nobodies have to die so that History can come alive.)

I applauded when I read it.

If Arvin Hill would lay off plugging me, I'd link to something specific on his blog. I love how he often prefaces what he's about to write about with a blanket denunciation of the subject at hand. Cracks me up. But come on, Arv, post something willya?

As you should know by now, I'm something of an easy touch when it comes to animals. Ten or so years back,a few friends of mine started taking in cats who were sick, injured and so on  -- even though neither of them was particularly a cat person. A decade later, their lives are devoted to providing a safe, clean, loving place for these critters. Up until now they had been able to pay for this on their own, but the tainted cat food crisis has caused costs of their operation to soar. So if you're a softy like me, go to .2muchcat.comand help these do-gooders out before they end up out in the alley with the rest of their orphans. Best of all, they can't afford to file to become non-profit so you won't have to save your receipt or anything. And if you can't help, please at least spread the word.