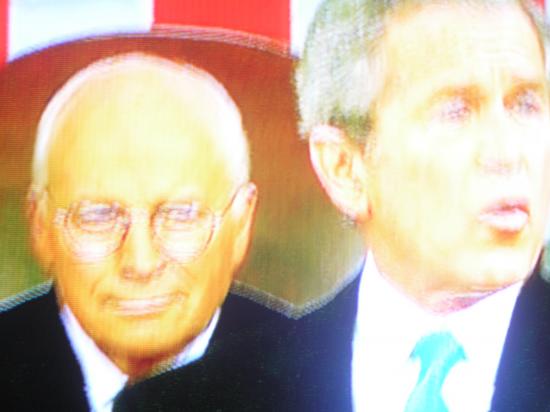 Huckabee-- no apes in his lineage!

I'll post when I have anything to say all super night long. You'll just have to live with the typos...

Some weeks back, Mike Huckabee labeled Mitt Romney as "the guy who laid you off." Recently Romney has proven Huckabee's point-- by trying to lay off the former Arkansas governor from the 2008 race for the Republican presidential nomination. Romney has turned a demand that Huckabee  quit the campaign as a regular part of his stump speech.

This afternoon, by winning the West Virginia Republican caucus, Huckabee may have become the guy who lays off Romney or at least he's become the guy who didn't get laid off and therefore left Mitt as the guy more likely to receive a pink slip.

Romney was a tough sale in a very Christian, very rugged state. He does look like the guy who laid you off and West Virginia has no shortage of people who've been shown the door by smarmy corporate bosses reminiscent of Romney. And besides his loopy Christian views, Huckabee at least mentions bread and butter issues in a  such a manner that makes it sound like he's visited a supermarket.

Still, Romney led today's West Virginia caucuses in the first round of voting. But in the second round, McCain's supporters switched to Huckabee to give him the victory. Rather than accept this loss graciously, a clearly spooked Romney campaign denounced the results as being a typical Washington back-room deal. But the rules weren't changed and when Romney only got 41 percent in the first round, he was doomed.

This probably won't be the last moan we hear Romney tonight. Best of all, every time Mitt gets stomped so does Rush Limbaugh, who is commanding his lintheaded followers to support Romney. Should he Mitt the bed anyway, Limbaugh will be entertaining his listeners tomorrow by gnashing his teeth.

7p.m. Obama wins Georgia. Sen. Clinton may well denounce LBJ for signing the voting rights act before the evening's over.

Too tight to call between Huckabee, McCain and Romney in Ga. GOP primary. Grease-sweating fascist blowhard liar, start your gnashing!

If Bob Dole hooks up John McCain with some Viagara, there is no question that NBC's Brian Williams would blow the Republican frontrunner.

and please add my endorsement, as well!