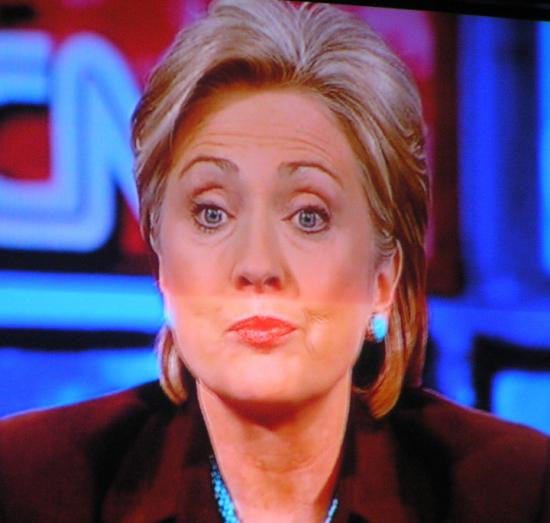 Clinton -- unbowed despite all those she helped bloody.

I must reiterate an obvious point in defense of Hillary Clinton. Senator Clinton has been absolutely correct to refuse to admit she made a mistake when she voted to authorize George W. Bush to use military force in Iraq.

Her vote was no mistake. It was a deliberate act. So she shouldn't, as many have suggested, simply apologize for it and move along.

Clinton's vote to strap bandoliers on Dubyahoo was a cold and calculated act, committed by an ambitious politician. She knew Bush's paranoid ravings about Iraq were trumped up bullshit. She knew that if the measure passed in the legislature, it was tantamount to a declaration of unjustifiable war. She knew it, we knew it, everyone knew it. So her vote was intentional and no mistake.

She voted as she did because she was afraid to stand up and do the right thing because doing the right thing would have exposed her to the wrath of jingoistic morons. She believed that to vote against the war was to sacrifice her hopes of becoming president. So in an act of expedient cowardice, she put her petty ambition first and humanity second.

And so what she needs to apologize for is having been heartless and soulless enough to put her megalomaniacal cravings ahead of the safety and well-being of hundreds of thousands of innocent people who have had their lives taken or shattered by this needless war.

Thanks to Hillary Clinton and a bunch of other political cowards who knew better but did the wrong thing anyway, thousands of Americans are dead and hundreds of thousands of Iraqis are dead. Because of Clinton and the other calculating cowards, mothers and fathers have lost their children. Children have been orphaned. People have been blinded and maimed. Arms and legs have been lost. Minds have been shattered. Unavailing grief has spread through friends and families of the lost and the ruined. And for what? So we can watch her dance around the true reasons for her boundlessly immoral derogation of her duties as a United States Senator? Trail droppings...
If you doubt Clinton's insincerity, watch her discuss her pride in Wal-Mart here and tell me that she doesn't sound exactly the same as  she does when she's boasting about her credentials to be the president. And far be it from me to discuss fashion but apparently she got free dresses from Wal-Mart back in those days.

Nothing says party of the working people more than a debate at the Kodak Theater in Hollywood. I'm sure the opera seats were distributed at random to rank and file Dems.