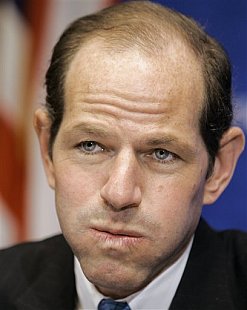 Apparently there was a wiretap and apparently Spitzer exchanged several text messages to set up an appointment with a prostitute.

This despite the fact that he was swept into office as a crime-fighting reformer, who as a prosecutor busted prostitution rings.

So this is the equivalent of Elliot Ness getting caught knee-walking drunk at a speakeasy.

Let this be a warning to all the Clinton super delegates. You could be next!

That's the last time he takes a number from Terry McAuliffe.

Spitzer has learned the hard way that there are some limits to unlimited text messaging.

Text messaging - it's like wiretapping yourself and making a transcript of it.

This proves that Larry Craig was wise to only communicate with foot taps.

For now Spitzer plans to spend time in private, where he will practice wearing pants.

Somewhere Bill Clinton's trying to figure out how to explain that the Emperors Club VIP he always calls is an upscale Chinese restaurant.

The Republican National Committee issued a brief statement that read: Oh sure, show us up by patronizing women prostitutes.

And you thought The Wire ended last night!

There goes the last good-paying job in New York.

UPDATE: For those of you flooding the blogosphere with descriptions of Spitzer's demise as "tragic," I remind you that he was all for the Iraq war.He did nail a few Wall St fat cats but put away exponentially more poor people with his merciless prosecutions of drug law violators, replete with demands for malicious sentences. He came to Albany as a reformer and was almost instantly caught using state cops to spy on a political opponent. When Lt. Governor David Paterson takes over, it will be an upgrade.