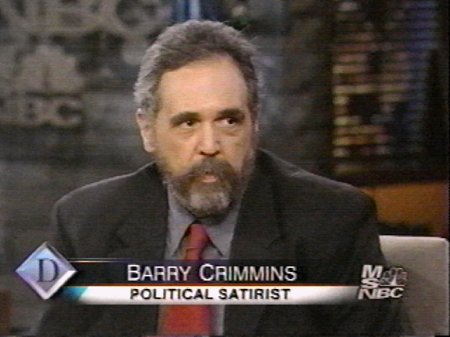 by Red Bates and John Joslin

It was revealed this morning that Barry Crimmins had swiftly and without fanfare taken over the reins of New York in the wake of the yawning vacuum left by his partyship, the dishonorable Eliot 'Sportin' Life' Spitzer, the now former Governor of New York.

Crimmins  explained,"Someone had to shepherd the Empire State through the perilous night. Anyone could have done it. I did. We were rudderless and I could feel it even here at beginning of the Endless Mountains, where I reside. I love New York is more than a slogan to me."

Acting Governor Crimmins swiftly consulted his inner circle and acted just before midnight, first notifying Spitzer that he had additional information from some 'show business friends' on the then governor. Spitzer signed over the state to Crimmins without delay. The new governor quickly issued several executive orders and by dawn, had worked the legislature all night to push through a number of reforms. Crimmins signed the legislation, reminding senators and representatives that his 'show business friends' would be happy to make public additional information concerning legislators should the politicians choose to obstruct these necessary reforms. Albany insiders say the newly minted chief executive then stepped down from public life, his rapid" citizen's ascent" to the helm over before most New Yorkers were even aware it had occurred.

It was a night that turned things around in many areas, starting with those concerning the demise of Mr Spitzer. Herewith prostitution in New York will be decriminalized. Penalties for pimping were greatly strengthened. Anyone caught forcing anyone into prostitution will be jailed for a period of time equal to no less than 78 times the period of time victims suffered in forced servitude.

Acting Governor Crimmins issued a mass pardon to thousands of non-violent prisoners that had been incarcerated at the numerous correctional institutions around New York state. The surprised inmates, mostly clad in striped flip-flops and prisoner issue pajamas were roused awake by correctional officials and given the good news. Each former convict received $10,000, a suit of clothes, and a CEU diploma equivalent to a 4 -year college degree in Sociology or a related field. All of their records will be expunged. Correctional officers were given the choice of signing up for an occupational retraining program or emigrating to a less progressive state. The Rockefeller Drug Laws, down to their very last vindictive element, are abolished.

Ex-Governor Spitzer was conscripted into mandatory community service . He will be picking up trash 12 hours per day along the New York State Thruway between Oneida & Fultonville. "Both sides,"asserted Crimmins , who released the Herkimer Falls Jaycees from responsibility for their normally assigned turf, providing they agree to stop promoting capitalism. The Jaycees quickly acquiesced.

These initiatives signed into law at a sunrise ceremony on the capitol steps include the following:

Residents of New York City paying over 20 percent of the income of the primary breadwinner in rent, will have that rent lowered to represent no more the 20 percent figure. All moneys paid over that amount during the renters tenure at their current addresses will be refunded in the form of rent credits. These credits will be applied until the excess rent has been exhausted.

Ellis Island will be reopened to foreign visitors and returned to the old 'wink-wink, you're in' system.

The Dept. of Homeland Security was ordered to pack up and leave the State of New York. Crimmins explained there is no need for foreign para-military organizations to operate inside New York. He  emphasized that, given its incredible funding and manpower, New York law enforcement agencies had damned well better be able to protect the state's residents.

The Statue of Liberty will be fully reopened to the public, all the way to the top. There will be no more strip searches of visitors.

The Venezuelan consulate will open a branch office in Albany to help facilitate the delivery of free home heating oil and complimentary gas cards  to cash-strapped New Yorkers.

The New York Yankees have tentatively agreed to play a series of goodwill exhibition games in Venezuela. Under emergency authority granted to the Governor to regulate and superintend public amenities impinging on the health and welfare of the public at large, interim Albany top-dog Crimmins decreed that 2,500 'convenient, clean , and functioning' water fountains to 'slake the public thirst' be installed with all deliberate haste in the boroughs of New York City. An equal number of public restrooms will be constructed.

Fast rail lines will be constructed from the eastern tip of Long Island to the St. Lawrence Seaway in the north and Jamestown in the west and will connect all New York cities of 30,000 residents or more. All other areas will be serviced by alternatively fueled buses.

High speed internet access will be made available gratis to all New York residents, as it is essential for the growth and education.

Statewide high tech recycling centers will be set up and used to train residents in high tech maintenance, repair, reutilization and installation. Recycled computers and free training will be made available to residents otherwise unable to finance such necessities.

Take home pay for all teachers in the state of New York is hereby doubled.

All New York residents capable of maintaining passing grades will receive a free education through college, graduate school and doctoral programs in the SUNY system.

All schools will no longer 'teach to tests.' Instead, every effort will be made to determine students' aptitudes so that they can be allowed to learn about things that will be relevant to them for the balance of their lives. Curiosity will no longer be punished but instead, celebrated.

All New York hospitals and medical facilities will provide health care upon demand to any resident in need of care. Failure to comply will result in the revocation of medical  and business licenses. This initiative will be funded by small payroll deductions and a progressive income tax on all residents earning more than $200,000 per annum and the seizure of assets of HMO's and other parasitical institutions that once preyed upon healthcare- deprived New Yorkers.

All New York State law enforcement agencies and personnel are immediately instructed to detain and arrest any and all officials, administrators, appointees or functionaries of the George W. Bush administration found at or in the territory or jurisdiction of the State of New York. Such persons are to be held subject to normal provisions for timely arraignment and determination of bail under the reasonable suspicion that they are actively engaged in a continuing criminal enterprise to flagrantly violate and undermine the United States Constitution, the United Nations Charter, the Geneva Accords, the International Declaration of Human Rights, and relevant sections of the New York State Criminal Code.

The bulk of New York State National Guard units are hereby mobilized and will be sent without weapons or ammunition to New Orleans to construct and rehabilitate residential dwellings at the direction of displaced residents' organizations. New York Guard units serving overseas are hereby ordered back home to perform their proper task of securing the safety of the state and nation. All people with 'personal assistants' will be rounded up for reeducation so that they might learn to function like normal citizens.

All contests between artists are hereby prohibited. Using state grants as an incentive, artists will be encouraged to learn to cooperate with one another rather than compete with fellow performers and artisans.

Abandoned commercial and industrial real estate will be made available for reclamation. These reoccupied buildings will be used to train residents in the building trades, the lively arts, culinary arts, various crafts and technical trades. These properties will also be transformed into day care centers, low income housing, food pantries, farmers' markets, crafts shops and arts facilities.

One National Guard unit will be assigned to go from municipality to municipality, shutting down all Wal-Mart stores and affiliated outlets. Existing Wal-mart stock will be seized and redistributed to local merchants to help them stock reopened mom and pop retail outlets.

Foreclosures upon occupied homes in the state of New York shall be suspended until loan agreements can be reworked to eliminate usurious interest rates. Retroactive fair rates will be set and homeowners will be credited for previous overpayment.

All real estate owned by religious institutions valued at more than two million dollars or that of any value but not used on a regular basis for church services shall be taxed on the same schedule as any other real estate. Homeless shelters, soup kitchens etc will be exempted from this edict.

Use of snowmobiles, jet skis, all-terrain vehicles and other loud, polluting, motorized devices for anything other than emergency service or approved commercial use is hereby prohibited throughout New York State and its boundary waters.

The New York State motorcycle drivers license test will be administered in three parts. First, drivers must demonstrate the proficiency necessary to mechanically prepare motorcycles in a roadworthy fashion -- special attention must be paid to the installation and maintenance of effective sound abatement devices. Only after passing the mechanical portion of the test will drivers be permitted to take a written exam and then a road test.

Adults who want to marry one another will be licensed to do so and wished good luck.

Funds for these all these efforts will be provided by Wall Street tycoons, who agreed to ante up providing Crimmins 'show business friends' continue to withhold certain information.

When asked how he could put together such an expansive program on such short notice former Governor Crimmins simply said, "In crisis there is opportunity -- providing you have a properly prepared contingency plan ready to roll. These initiatives should give soon-to-be Governor Patterson a head start in straightening out this state. Now if you'll excuse me, I have a medical appointment."