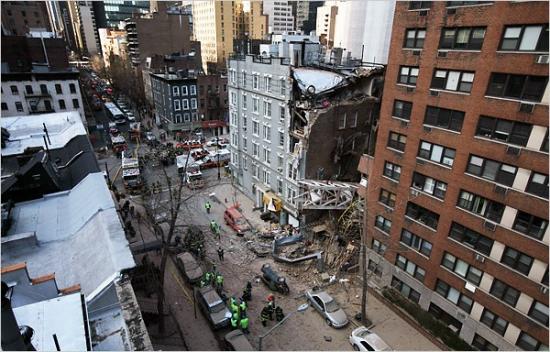 Happy St Patrick's Day, such as it is.

In New York City, things were hardly festive as daylight-delayed dawn arrived this morning to find stern bears stalking Wall St. By midday, the pants-less man who became governor will leave the office he held largely because he brought a tiny measure of criminal accountability to the loan-floating crapshooters of lower Manhattan. Living and dying by the badge, he departs as a disgraced hypocrite brought down by government snoops who waded through shredded parchment to gain access to what should be nobody's business. Several blocks uptown, rescue workers sifted through the wreckage caused by a crane collapse provoked by shifting winds, inadequate bracing and a treacherously unsafe workplace -- a perfect metaphor for the queasy circumstances that caused the city that never sleeps to come-to with a hangover 24 hours ahead of schedule at the top 'o this morn.

New York City's coincidence of calamities make it only the most acutely obvious of this nation's problem spots. To the south, natural disasters both fresh and stale have scarred communities whose recovery is negatively mitigated by the theft of our nation's human and fiscal resources for use in the infliction of unnatural and unnecessary disasters upon people half a world away. And so on this traditionally carefree day, the wearing of the green gives way to the continued soiling of the Red, White and Blue at home and abroad as a surge of rickety old warmongers storm a nation that was brought to ruin by a run on blood-banks that began five years ago.

The commodity that made Iraq the target for phony retribution is in shorter supply than ever. The escalating cost of this slippery substance is stomping its unleaded foot on the accelerator of our economic demise. This sorry fate could have been avoided had we long ago faced the environmental fact that offered us a choice of either riding together or running out of gas separately. Unfortunately the only reality the US of A willfully faces these days is of the trumped-up variety that features cutthroat contests between people turned against one another for a sedentary nation's drooling distraction.

The political hope for this country crests with a candidate who may prove to be less than evil -- a lofty standard in an oily age but pitiful by any fair measure. He's a gentleman of color, unlike his opponent for the presidential nomination of the defaulty party of the people. This adversary is a daughter of privilege who is not averse to proving her worthiness to command a merciless war machine by phoning in her opponent's coordinates so that he might be saturation slime-bombed.

Although not a bigot in her icy heart, she knows that racist votes spend just the same on Election Day as the ballots of those who believe that the passage of time has made certain truths inexorably self-evident. And so she has become the lessee of evil and her surrogates now smear her colorful competitor. That competitor has turned more cheeks than an Ice Capades star because to respond in kind would only prove to some that you can't trust them people. Each day more scummy sorties are sent off to strafe a political target, dispatched by a panicked politician unconcerned with the extensive collateral damage being done to hope, optimism and shared spirit.  At this very moment Mr. Less Than Evil is facing down a mob brandishing a starred and striped noose made just for him because he's committed the unpardonable sin of sitting still in church while someone told the truth.

And so it's a great day for the Irish  --  who give thanks to St. Patrick for driving the snakes out of Ireland so they could take up occupancy in the United States.