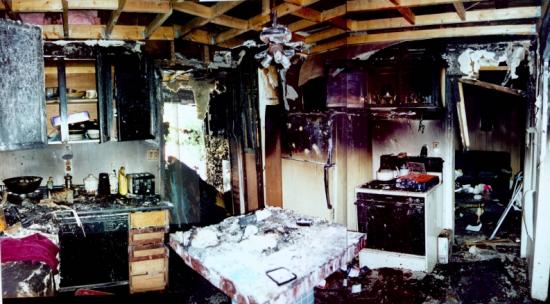 Here's a story that was told to me by a guy who knew the son of the star of this story. If it's just an urban legend, it's a good one.

So this friend of my friend is sort of a legendary cynic, a real sarcastic pessimist. He blames his attitude on his upbringing. Neither of his parents ever demonstrated any sort of fear of cocktails. They weren't afraid of sniping at one another, either. Both parents always made sure to leave plenty of time for neglecting their son. The father rarely did much around the house but when he did, it generally led to disaster. A neighbor, who was always nice to the son, couldn't cover up his disrespect for the father and his inebriated incompetence.

One Sunday, the father decided to replace the kitchen floor covering. The adhesive compound he had to use to secure the tiles was highly flammable so his practice of chain-smoking at all times was abandoned for the duration of the effort. He made do with several beers while he laid down the new floor. Things were going very well until he reached up to put the can of adhesive on top of the stove. It tipped over and rolled into a burner with an ignited pilot light. The next thing the father knew, he was face down in the front yard, his clothes in tatters and his hair seriously singed. Without regard for his personal safety, he ran back into the house to save his most prized possessions -- his bowling trophies. Because of the intense heat the trophies were seriously deformed and drunken dad burnt the hell out of his hands during the rescue. Now that was worth it!

The mother salvaged a couple bottles of booze and some highball glasses. She set up a lawn chair and toasted her husband's stupidity while waiting for the fire department to arrive. It did and the house was saved.

The father healed and when they moved back into their repaired home, the neighbor was waiting with a new name for Dad. From that point on he called the bungling boozer Linoleum Blownapart.