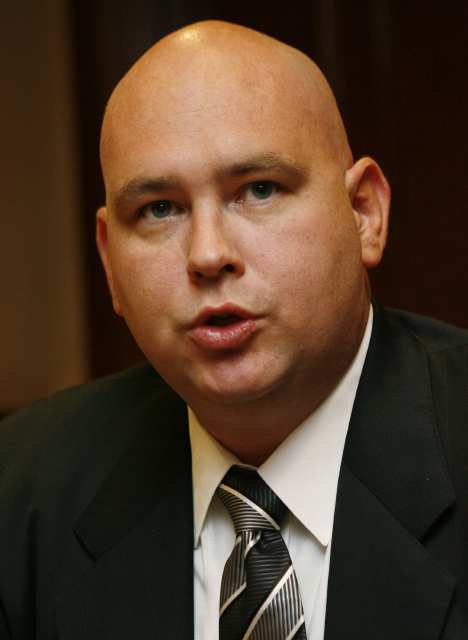 The wait is over! Whispering Johnny McCain's first ad for the fall election has begun airing in New Mexico. It promises a needy nation that he will be: "The American president Americans have been waiting for" .... in, one would assume, America.

Finally, a candidate for people so dense they actually believe that being an American gives one presidential aspirant a leg up on the others!

We Americans have already done enough waiting for an American president. We've been waiting for over seven years to be spared of George W. Bush's insane rule. Replacing Bush with an embittered and intellectually mediocre man, who promises to continue the current prez's stupidest policies, is not what the 80 percent of the nation that disapproves of Dubyahoo has in mind.

Have you caught the Hoarse Whisperer's senior adviser, Steve Schmidt? He's a former Bush 'campaign operative' (and boy is he easy to picture among the brownshirts in West Palm Beach in 2000). Schmidt was a member of Karl Rove's satanic breakfast club and worked kneecapping opposition to Bush's appointments of InJustices Alito and Roberts to the Supremacist court. He was Governor Shickelgroper's campaign manager in 2006 so I assume he was allowed off the leash now and then but I never saw him speak. If  you haven't seen him, I don't want to ruin the surprise except to say he is a true jamoke. Mark my words, this Schmidt guy is a meathead's meathead and sooner or later he will say or do something that will cause more discomfort than a prune shortage on the Straight Crock Express.

The beauty of McCain is that his entire campaign is dependent on things going well in Iraq.

The Bush-McCain Surge (and how brilliant of the GOP '08 standard bearer to supplant Dick Cheney on that marquee!) is reaping big dividends. Oh sure, it's raining missiles in the Green Zone and they're bum-rushing roadblocks elsewhere in Baghdad and there's a civil war between the Iraqi security forces in Basra but the important thing is the rule of law is in effect. Before the Surge, the Iraqi government wouldn't have had the wherewithal to declare war on itself in Basra, but now it has. More importantly, the Iraqi government can now impose harsh sanctions on miscreants. This weekend it's really laid down the law by declaring Baghdad under curfew. No one is allowed to leave their homes. That's right, the Iraqi capital has been grounded.

People in Baghdad now know that they're in BIG TROUBLE if they don't stop hanging around with the wrong element. If being grounded doesn't wise them up, stricter measures are planned, including a roundup of everyone's iPods.

So now that all American personnel have to wear helmets and flak jackets when they are outside of 'hard structures' in the Green Zone, I'm wondering where does this gear come from? No I'm not, I'm just wondering who will be in charge of collecting the protective wear from the grunts in the field.

If the 2008 presidential race were a bad movie (and no doubt, it soon will be) we've reached the part where the villain has been unmasked and no longer has to even pretend to be a decent person. And so now Hillary Clinton doesn't just announce her plan to torch the Democratic Convention, she announces it on FOX-NEWS, just in case any of the viewers want to kick in a few bucks to help whittle this country down to one-party status.

In the meantime, a group of gunrunners, outsourcers and money-grubbers of various description sent a nasty note to Nancy Pelosi warning her that they'd foreclose on the Democratic Party lest she stop making noises about how super delegates should fall in line with the will of the people. These oligarchs will nothing to the people but wars, a dim future and insupportable debt. And the people had better take it and like it or they will stop buying Senators and Congresspersons by the pallet. Oh please don't throw me in that briar patch, Mr and Ms Influence-Buyer!

It won't be long before Clinton is holed up in a .burning barn (that she of course torched) trying to fire an empty gun at reality :CLICK!: CLICK!: CLICK!:  Next she'll curse and blame everyone but herself for her lack of ammunition and then throw the empty firearm at the mob of straight jacket- wielding decent citizens surrounding her. She'll run out of the flames and collapse, sobbing about how she it wasn't supposed to end this way and how Bill set her up so that he could finally be free of her. And for once she will have finally put forth a paranoid hypothesis that's somewhat plausible. Have you seen HBO's John Adams miniseries? The adaptation of David McCullough's bestseller is nothing short of a soaring accomplishment. Imagine avoiding so much as a mention of Thomas Paine during the entire American Revolution!

It's not history. It's HBO!

But there is something subversively wonderful about seeing Harvey Pekar as John Adams.

Thanks to all for the kind comments and wishes concerning my health. I seem to be on the mend and trust the warm weather will bring a return to form for me.