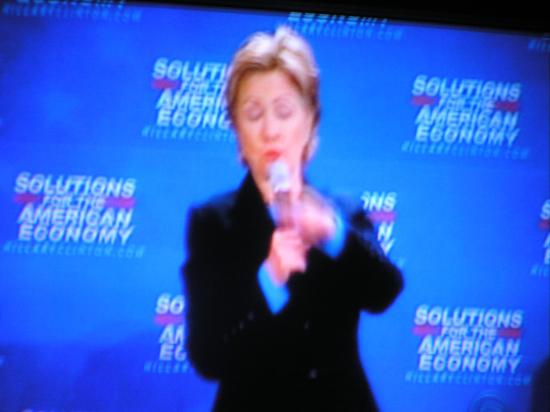 It's the middle of the night as I take fingertips to touchpad and I am wide awake, battered by asthma. The asthma is the icing on top of a bronchial infection. I'm having violent coughing fits, which are bad enough on their own but when combined with a bad back they're really awful. I could really use some civilized single-payer healthcare.

Despite my maladies, I have been keeping up on things. I know Detroit will soon need a new mayor to preside over plant closings and library decommisionings.

I know you don't have to be a world traveler to know that privatizing control of public records is now an even more demonstrably bad idea.

I know that we have reached yet another awful tombstone milestone in Iraq.

I know that Dick Cheney was just over there, flaunting his undead status.

I know we should just let Johnny Hoarse Whisperer McCain keep talking because the more he talks, the more he makes Bob Dole's '96 campaign look a valentine to younger generations.

I know there's a new surge in Iraq, but it's not the one Bush and McCain are so proud of. I know the NCAA tourney is in full swing: Rock, Scissors, Jayhawk! (That's how it goes, isn't it?)

And of course I know that Hillary Clinton should not be the president of the United States.

"I certainly do remember that trip to Bosnia, and as Togo said, there was a saying around the White House that if a place was too small, too poor, or too dangerous, the president couldn't go, so send the First Lady. That's where we went. I remember landing under sniper fire. There was supposed to be some kind of a greeting ceremony at the airport, but instead we just ran with our heads down to get into the vehicles to get to our base."-- Hillary Clinton

At least, unlike fellow sleep depravee Hillary Clinton, I haven't had my health threatened by imaginary Bosnian snipers. Speaking of which, maybe Bush and Cheney saw footage of Hillary's arrival in Bosnia and assumed that American soldiers would be greeted in a similar fashion in Iraq.

I once did a gig on Cape Cod with Sinbad that was definitely more dangerous than his appearance with the then First Lady in Bosnia. I promised myself that night that if I got out of there alive, I'd never again work in  a bar that was cleaned by firehoses at the end of every night. My fellow Americans, I have kept that promise.

Anyway, Clinton's brazen lies about being under attack in Bosnia (and she's always the victim of evil attacks, isn't she?) show the same disregard for people truly in harm's way that she demonstrated with her "who could have imagined that Bush and Cheney would lie about something that could lead to war?" war vote back in 1992. When it comes to combat, the only service Hillary Clinton has seen has been self-service.

How stupid does this woman think we are? Inordinately stupid. How else could she presume she could get away with such brazen mendacity? For chrissakes, nobody sends First Ladies on dangerous missions but she asserted that it was the norm -- that the default thing to do concerning dangerous missions was to send the First Lady! The nanosecond she started blathering that hooey, a sniper with a tranquilizer gun should have taken her down so that she could be put safely into a straight jacket and bundled off to a sanitarium. Because that's just fucking crazy.

Had this happened, don't you think we'd have heard about it? And considering how rocky her marriage has been, don't you think Bill would have caught some heat for sending his wife into a free-fire zone?

It's gotten to the point where listening to Clinton speak is like overhearing a homeless mental patient talk to herself. But when the bullets fly, who do they send out? The First Lady, that's who. There I was, Sinbad on my left, Cheryl Crow on my right, deadly snipers everywhere, some sent from Northern Ireland, others who had been calling me at 3 a.m. on that damned red phone trying to wear me out and rattle me but I was too quick for them and they didn't get me but they were trying and they're still trying because there are vast plots against me everywhere! WHY DO I ALWAYS HAVE TO ANSWER THE QUESTIONS FIRST? Oh sure, oh sure, I'm happy to answer and you know why? Experience! Day One Experience! That's why. And I pick my own preachers, thank you very much, please! 35 years of solutions for America! 35 years, count 'em! Have ya noticed how gas prices have gone up? Me, too. That's why I should be the commander in chief! For months now she has been paranoid as hell, prattling about how unfair everything has been to her in a campaign from which any other candidate would have been sent home several  abject failures ago. This woman is crazy (and spare us the allegations of sexism-- THIS  SPECIFIC woman, not ALL women), she is a liar and she is delusional. She is megalomaniacal -- seriously, obviously and dangerously megalomaniacal. No one this desperate to be president should be president. Period.

Hillary Clinton weeps for the country at the thought that she might not be running it next year. Any sane person should be sobbing for the inverse reason. Her campaign literally refers to her strategy as "kitchen sink." That's shorthand for 'unethical, unhinged and vicious.' Most people neither connect with nor like her. She is a phony, phony person. If you don't think she reeks of insincerity, never go car shopping alone unless you want to come home with undercoating on your boxer shorts.

Did you see her talking about her "misspeaking" yesterday? She didn't have her eyes open for about forty seconds. She knew she was lying. Little children and maniacs do that when they tell whoppers. During her attempt to excuse herself for telling a lie on videotape that was refuted by more videotape, she hemmed and hawed and sunk  ever deeper into a pit of her own burrowing. At the end of this squirmfest she finally announced that she was only human and allowed that that probably comes as a surprise to some people. Then she opened her eyes as she cackled at her cleverness. It was fucking creepy.

And while we're speaking of nonsense being disseminated by the desperate and shameless Clinton campaign, let me tell you that no matter what anyone says, Hillary Clinton is not loved in upstate New York. She is tolerated... by some. She is voted for... by enough but only against incredibly weak opponents  --Rick Lazio and that guy Spencer from Yonkers. Lazio was a late entry announcing only after Giuliani debuted his electoral disappearing act. Spencer was such a sacrificial lamb that had his campaign any resources whatsover, he'd have passed out mint jelly at his events. I live in the boondocks of upstate New York. I get around a bit from Ithaca to Rochester but mostly I stay close to the Corning/ Bath area. The next Hillary '08 sticker I see up here will be the first. Every now and then I see her old senate campaign stickers but they are very rare. There is zero excitement about her up here -- unless you count anger The progressives despise her. The reactionaries hate her. I suppose she enjoys some support from delusional liars who can appreciate how hard it is to prevaricate with a straight face. But there is no excitement about her presidential campaign around her. None. So just because she wins elections against the bum of the month club doesn't mean she is a hinterlands wedge-buster. OK,  I just coughed so hard that I pulled a muscle in my neck. This must mean God, through the minister of Hillary's choice, has learned of what I am writing and has decided to punish me for uttering such blasphemy about Her or His or Its chosen candidate.