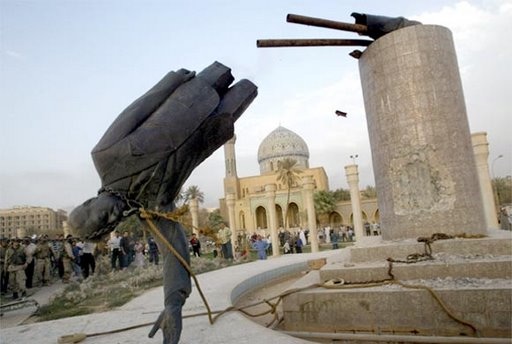 US war effort at its apex

Sorry I've been making myself scarce lately. I'm not ducking the law or off on a bender but simply down with bronchitis and feeling too crappy to spend much time wading through the toxic slime of current events.

Here's a dipper or two of bile to tide you over until I'm feeling well enough to resume my normal grousing.

The war goes on-- Happy Anniversary! Support the troops! Go out and knock down a statue. Just make sure it's not John McCain, whose rigidity could be mistaken for bronze.

The idiotic discussion of race continues. If it keeps up, come November, I'm writing-in Jeremiah Wright.

Where would anyone in the black community get the idea that AIDS was disseminated by the government? The government hasn't done that since Tuskegee! And hell, that 'study' only went on for 30 years! Paranoid maniacs!

The uproar about Wright could be summed up thusly: "Well, Obama always looked like he was the kind of guy who hung around with Negroes and now we have proof!"

Today's MSNBC POLL
Now that it's obvious that Barack Obama consorts with known Negroes would you still consider voting for him?

Hillary Clinton continues to label primaries she knows she's going to win as' make or break.'  And even though she starts off with big leads and wins by much smaller margins, we are supposed to treat her as if she has beaten every odd to do nothing more than tread water she's already dead in.

Watching Clinton in action is particularly grim. I saw her speaking to a group of voters in West Virginia --- wait a minute-- I saw her pandering to a group of voters in West Virginia yesterday. She was droppin' 'g's' like it was goin' outta style. She was also speakin' very slowly to accommodate what I'm sure she assumed was the intellectual ineptitude of her audience. It was like watching a bad teacher present remedial instruction --  a clump of lint could  follow her but she doled it out at a glacial pace. "How many of you have noticed gas prices goin' up a lot lately?...  A lot of you have! Very good! And this makes it hard to get to work for people who have to drive, doesn't it?"

May we please go to lunch now, Ms. Clinton?

Al Giordano explains what's behind the glass that will be broken in case of emergency.

And in case you missed it, old pal John Joslin made his literary debut in Counterpunch.

OK, time for my nap.