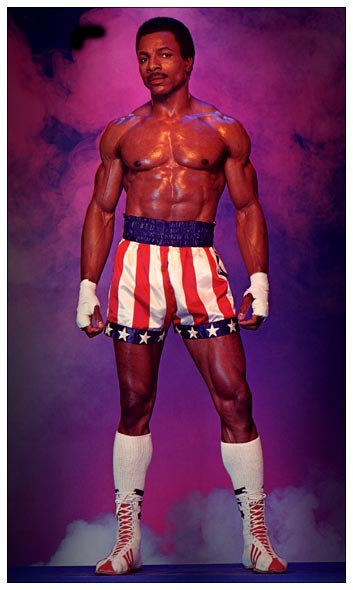 In an obvious bid to guarantee bad sequels from now until August, Hillary Clinton has begun likening herself to Sylvester Stallone's Rocky. Considering her recent failed attempt to create a heroic narrative for herself, one would think she'd be cautious about tying herself to a fictional character who made his name under fictionally violent circumstances. In boxing terms that's called "leaving your guard down."

As unwise as Sen. Clinton's bringing up Rocky may have been, there are definite parallels between the Italian Stallion and the Chappaqua Chump. Clinton's campaign is generating about as much excitement these days as 2007's Rocky Balboa (aka/Rocky 38) did when it came out right after Stallone was caught by Australian authorities with enough human growth hormone to spike the punch at a Jose Canseco garden party. The original fake Rocky was a fighter with marginal skills who needed a script to beat anyone. The current movie Rocky is looked upon as the thing that won't leave. Like I said, there are  definite parallels.

But there are plenty of differences, too. Rocky was an underdog from the underclass. Clinton came up as a child of wealth on the hardened sidewalks of a posh suburb before heading to Wellesley, with nothing but regular checks from home, a meal plan and a roof over her head standing between her and the cold, mean world. She then went to Yale Law, married a future state attorney general, governor and United States president before fighting her first bout. Rocky worked on the heavy bag. Clinton opted for the carpetbag. Rocky fought everyone who would fight him. Hillary beat up two tomato cans in the only contests of her career. Rocky never took the heavyweight belt for granted. Clinton entered the championship tournament with "Inevitable" embroidered on the back of her designer ring robe. In Rocky's first title bout he lost to a black man with a funny name. Oh wait, that's another parallel.

Although, at least as far as vendors with unpaid bills from her campaign are concerned, Clinton has shown an ability to bob and weave, her comparison to the fictional Philly fighter may eventually corner her. As former Rocky (III) foe Clubber Lang might put it, " I pity the fool who doesn't realize Sylvester Stallone endorsed John McCain a few months ago." 
"I'd much rather lose a campaign than lose a war." -- John McCain

"How about both?" -- Barry Crimmins

McCain's emergency appeal to boys who are more afraid of losing than anything else in the world speaks to every clown who ever got in a fist fight at a slow-pitch softball game. The United States has already lost a lot more than a war it never should have started in the first place. Thanks to America's growing police state, we have lost our civil liberties. Thanks to America's practices of torture, illegal detention and extraordinary rendition, America has lost whatever good name it had in the world. Thanks to America's two-term fascist moron president, America has become an international punch-line. Thanks to the low, low prices of politicians, the American government has become a subsidiary of heartless, bloodless corporate scum. And thanks to that, the American military has become Hessians in service of that scum. Under the phony cover of "globalization" America's economic backbone has been filleted and shipped in sharp shards for use in impaling peasant populi around the world. This country is broke, it's infrastructure is busted and its health in the exact same condition as the ethics of the insurance and pharmaceutical racketeers who value profiteering more than life. Why exactly should I give a shit WHEN we officially lose a war that was a lost cause the second it became a viable option? And while I'm at it, is there a marksman anywhere with a dead enough eye to put one through the dehydrated pea-brain of Joe Klein? (Just kidding, goofballs, let me be the first to say that I know this country is full of crack shots) This week, Klein, the biggest self-appointed authority this side of Tom Friedman (or is it that side? you never know when Tom is at the Bejing airport testing cell phone reliability) uses his TIME column to advise Barack Obama to put on a flag pin and start ladling out super-sized helpings of patriotic tripe.

Klein's friendly advice was provoked when he recently attended an Obama rally in Pennsylvania and here's what caught his attention:

.....Obama's response to a young man who remembered how the country had come together after Sept. 11 and lamented "the dangerously low levels of patriotism and pride in our country, the loss of faith in our elected officials."

Yeah, that's this country's biggest problem. We just don't trust double-talking assholes like we used to in the good old days when New Yorkers bravely inhaled toxic fumes so that we could get Wall St back up and running again, and pronto. If only we had the kind of faith these days. Please Mr Bernanke, explain to me again why extending unemployment benefits would be wrong when the money can do so much more good covering the fat asses of investment brokers.

Isn't there an editor or someone who should be noticing that Joe Klein's "check brain light" is flashing?  His world view needs changing, and quick, or his entire mental apparatus will seize up and then where will we be when we need some counterfeit insight? Pride in our country, indeed! Why the fuck should we be proud to live in a nation that takes Joe Klein seriously? This guy is the Krakatoa of crap. Listen:


Patriotism is, sadly, a crucial challenge for Obama now.


Oh yeah, and you're crying a crocodile river over it,  aren't you , Joe? Or are those tears caused by the li'l paper American flags on toothpicks that US interrogators wedged under your fingernails until you agreed to write a column bemoaning our nation's paucity of patriotism?


His aides believe that the Wright controversy was more about anti-Americanism than it was about race.


His aides, -- unnamed, unidentified and faceless -- like any good witnesses brought in to assist  in the character assassination of any allegedly unpatriotic citizen facing a good old red, white and blue inquisition.

And you just knew Joe wasn't about to miss mentioning:


Michelle Obama's unfortunate comment that the success of the campaign had made her proud of America "for the first time" in her adult life and the Senator's own decision to stow his American-flag lapel pin — plus his Islamic-sounding name — have fed a scurrilous undercurrent of doubt about whether he is "American" enough.


And Joe Klein, minor tributary, is happy to feed that undercurrent while pretending to offer thoughtful advice. Well here's some advice for you, Joe.  Stow your own flag pin right at the source of your jingo-jangling Obama-baiting. If you give yourself a prostate exam while doing this, well that's your own business. Although as an American I withhold the right to smile at the thought of a ragged metallic old glory flapping in and out of your hemorrhoidal tissue each time you take a deep breath to express pride in our wondrous nation.

If only it were only in place when you belched the following:


"In this campaign, we will not stand for the politics that uses religion as a wedge and patriotism as a bludgeon," he said on the night that he lost Ohio and Texas. But then he added, "I owe what I am to this country, this country that I love, and I will never forget it." That has been the implicit patriotism of the Obama candidacy: only in America could a product of Kenya and Kansas seek the presidency. It is part of what has proved so thrilling to his young followers, who chanted, "U-S-A, U-S-A," the night that he won the Iowa caucuses. But now, to convince those who doubt him, Obama has to make the implicit explicit. He will have to show that he can be as corny as he is cool.

Yeah that's what we need, more horseshit about American exceptionalism. Hey, Mr Time Magazine final authority, the world is full of people whose parents have different backgrounds. There is nothing uniquely American about it. With columns like this, Klein's implicit stupidity becomes cornographically explicit. Is there any wonder why when you pick up TIME these days, it's always a few pages shorter than it was the last time you picked it up? Too bad Joe Klein isn't an advertiser or he'd already be gone.

Sorry I didn't post yesterday. My morning was spent fighting a crime spree by two delinquent puppies. I'd say more but the District Attorney has asked me not to speak to anyone until after the trial.

I finally sat down and wrote much of the above only to lose my connection to the net. Two hours later I still couldn't get online  so I gave up and struck a line through  April 2, 2008. Then another crime spree slowed me again today. The miscreants have been brought under control and finally I have had a chance to get this up