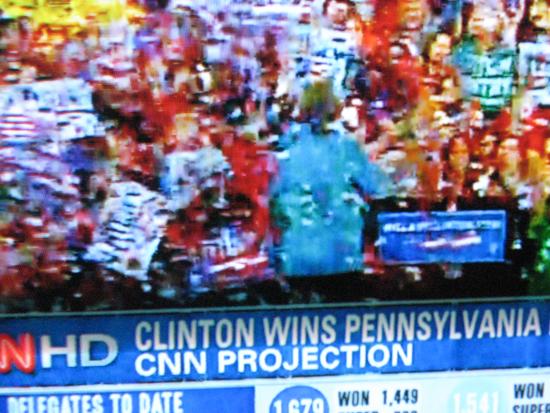 Never underestimate a Clinton. In a do or die race in the Pennsylvania Democratic Primary, Hillary Clinton aka/Rasputin the Mad Candidate didn't die.

The question today is: how did she come into Pa. with more than a 20 point lead and somehow make a win by half that margin look like she had replicated LBJ's rout of Barry Goldwater? A can-do spirit, that's how!

Clinton's Pennsylvania strategy was months in the planning. It began when she refused to win state after state that just did not matter to trick inexperienced Barack Obama and all of his naive supporters into believing that popular sentiment and delegate totals meant something. These lambs have yet to learn that such factors only count in states where Hillary Clinton wins. So she chose Pennsylvania and made it seem like she was a gritty little underdog in a state where she had an enormous advantage as a senator from next door and where there were plenty of the "low information voters" her campaign feasts upon.

To win Pennsylvania, her first job was to recast herself as a woman of the people. And so she went out to introduce herself to the masses as someone who understands what it's like to scrimp by on a family income that's been barely in the low nine figures since George W. Bush became president. Mind you, that's not even nine figures a year. Heavens no, the Clintons make due on annual seven or eight figure compensation -- plus the few scraps Chelsea manages to bring home from the hedge fund. Despite these economic hardships, they always wear clean clothes and have a smile for everyone-- especially when they're lying. You try it sometime when you haven't seen caviar on a room service menu in 48 hours!

Pennsylvania taught us that the Clintons are just like you or me. They worry about skyrocketing gas prices, and if only they'd ever actually had to pump it for themselves they'd care that much more. As part of her struggling American act, Hillary continuously reminded voters that she was being outspent by Barack Obama -- oh not in essentials like luxury hotels or overpriced fat cats in her campaign's front office but in things like advertising and the "ground game." Obama was out to prove that regular people could finance a political campaign and time and again the media took this sucker bait hook, line and sinker. Hillary Clinton knows regular folks have enough to do without expecting them to waste their time wielding collective influence over presidential candidates. Oh sure, now she's asking for dough from the great unwashed but only because she knows that any little people who have watched her campaign, and still want to help, are incapable of organizing their own thoughts, let alone organize the demands of what Mark Twain called "the great dull bulk of the nation."

Clinton's method of handling her finances put her in touch with many small American business owners who are facing economic extinction. Hillary had to face the tough choice of paying these campaign trail venders what she owed them or pushing ahead to places like Indiana and North Carolina, where unwitting businesses will still extend her credit. We now know which she chose. Now she will carry on and tell the rest of America about how she has seen true economic deprivation up close and personally.

Her Keystone miracle wasn't just the result of duping unwitting business owners into joining the HRC platinum circle. If only it had been that easy! Oh sure there was a rich vein of ignorance in the economically abandoned backwoods of Penntuck but to properly mine and exploit it, Senator Clinton needed to form a broad coalition. This group encompassed everyone that slithers about dispersing "walking-around money" for old school Dems in the Philly area and countless silent Pennsylvanians always happy to form citizens' brigades to fight the Negro Peril. Of course they had to couch these attacks in properly coded lingo-- thus the assaults on Obama's "elitism," meant to warn good honest white folk that this black fucker thinks he's better'n us!

Boldness was required in this strike on elitism, especially considering how the Clintons expect a lifelong reign as our leaders and how they demand unwavering perpetual loyalty from servants and subjects alike. But Hillary Clinton, member in good standing of the projectionists union, effortlessly foisted this humbug on the hayseeds and did it with the same straight face she used to unblinkingly tell us that Obama's campaign had been far more negative than her own. Hillary Clinton-- Ready On Day One To Say Anything To Keep Her Dreams of Power Alive!

Before this campaign started I'd have been hard-pressed to imagine how one might go about weakening an already impotent Democratic Party. But then, I'm not Hillary Clinton who should be using Burning Down the House as exit music at the political muggings she disguises as campaign rallies. Clinton has used the wedge issues of guns, God and patriotism to separate literate Dems from the pack as if they are infected with a fatal and highly contagious disease. In the stretch run in Pennsylvania, Clinton issued a loopy ultimatum to Iran that sounded as if it were crafted by the gang at happy hour at the Altoona American Legion lounge. She denounced "Democratic activists" and Moveon.org, a group originally formed to help save her husband from impeachment. Best of all she allied herself with the very people who tried to make sure Bill left office early. This unlikely coalition has been working hard as forward scouts for the Reptilian Swiftboats of October. And so here's Hillary dancing for Richard Mellon Scaife, dark overlord of the neocon slime machine and there's Rush Limbaugh encouraging his zombified listeners to cross over to vote for Clinton in primaries.

Truly the unsung heroes in Her Royal Clinton's recent surge are all Republicans. These humble Americans eschew credit-taking for the new and suddenly widespread practice of GOP Clinton worship. Lately you can't find a Gluttonous Old Partier who isn't expressing "grudging respect" for Clinton and praising her for taking it to a man so immoral he walks around with naked lapels. So why would they throw in with ancient foes like the Clintons? I mean why would they do this other than the obvious reason that they don't want to face Obama this fall, not when Hillary Clinton, despised by over half the people, could be easy pickins in the general election. Nowhere is this bastard coalition as front and center as it is on the cable news networks. Rife with relentless blowhards who have perfected the art of presenting agendas as analysis, there is almost round-the-clock Hillary homage from the most unlikely of sources. These newfound Hillarites include Joe Scarborough, a man incapable of growing tired of the sound of his own smarmy voice, who has been carrying reservoirs of polluted water in hopes of delivering the politically fatal knee-capping to Obama. Then of course there's Pat Buchanan, who considers nation before party when faced with the clear and present danger of a black man nearing a White House. Another surprise Clinton fan is Lou Dobbs, a latter day layman's Father Coughlin who played up the bogus Pennsylvania "issue" of bitterness as if populism has nothing to do with cognizance of one's circumstances. Most amazing of all, not one "neutral" analyst like Tim Russert or more progressive host like Keith Olberman has noted, much less questioned, this miraculous mass conversion of former Clinton detractors. These people can't spot a trend when it's sitting in the room with them. Hillary Clinton hasn't just welcomed reactionary support, she's embraced reactionary tactics - tactics she's employed to fill a kitchen sink with sewage before repeatedly smacking Barack Obama in the nose with it. Her opponent has tried again and again to rise above the stench, when the only way to eliminate it is to track to its fetid source and disinfect the area with sunshine and accountability. If he hasn't suffered too much kitchen sink-inflicted brain damage perhaps he'll catch on and follow the prescribed procedure before this public health danger grows even worse.

And so the strange bedfellows of the Clintons and the goon squad that tried to prematurely ejaculate Bill from office and then stole the White House in 2000, has lain together in the dusty hills of Pennsylvania. This unholy assignation has spawned at least a few more weeks of primary season '08. If this joint effort continues, and eventually succeeds in destroying Barack Obama, it will be back to business as usual this fall. The Republicans will try to push the majority of Americans who don't trust Hillary Clinton above the present 58 percent mark. Meanwhile the Clintons will goad the intellectually challenged, falsely mythical and inordinately ill-tempered Whispering Johnny McCain into melting down like a snow cone in a blast furnace.

And what of Hillary's  promise to conduct a civil campaign against her friend, Senator McCain? Never overestimate a Clinton.