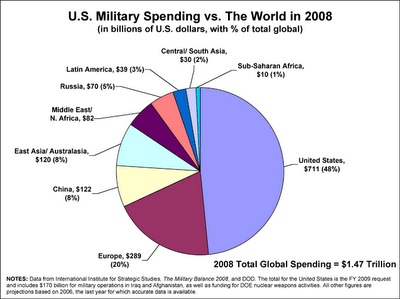 I knew that I could never again raise my voice against the violence of the oppressed in the ghettos without first having spoken clearly to the greatest purveyor of violence in the world today: my own government. - The Reverend Martin Luther King Jr.

And today as EVERYONE bemoans the assassination of Martin Luther King, we remain largely silent as a mob of defenders of a hateful status quo, that's imposed and enforced by the still greatest purveyor of violence in the world today - the US government,  gang-character assassinates Rev Jeremiah Wright for daring to say "Goddamn America!" America, a country where the poor continue to grow more desperate and hopeless. America, a country with over two million people in jail, including 900,000 African-Americans and a vast number of Latinos. America, a country that spends more on militarism than the next 46 highest spending countries combined. America, the home of the public relations machine that repackages the destructive horrors of economic globalization as some sort of advance for humanity. I could go on but like Reverend Wright, I succumb to weariness and just say "Goddamn America!" I believe that had Martin Luther King Jr not been slain forty years ago today, he would rise up on his 79 year-old legs and offer a big "AMEN!"

From: Why I am opposed to the Vietnam War


I'm convinced that if we are to get on the right side of the world revolution, we as a nation must undergo a radical revolution of values. We must rapidly begin the shift from a thing-oriented society to a person-oriented society. When machines and computers, profit motives and property rights are considered more important than people, the giant triplets of racism, militarism and economic exploitation are incapable of being conquered.

A true revolution of values will soon cause us to question the fairness and justice of many of our present policies. On the one hand, we are called to play the Good Samaritan on life's roadside, but that will be only an initial act. One day we must come to see that the whole Jericho Road must be changed so that men and women will not be constantly beaten and robbed as they make their journey on life's highway. True compassion is more than flinging a coin to a beggar. A true revolution of values will soon look uneasily on the glaring contrast of poverty and wealth with righteous indignation. It will look across the seas and see individual capitalists of the West investing huge sums of money in Asia, Africa, and South America, only to take the profits out with no concern for the social betterment of the countries, and say, "This is not just." It will look at our alliance with the landed gentry of Latin America and say, "This is not just." The Western arrogance of feeling that it has everything to teach others and nothing to learn from them is not just. A true revolution of values will lay hands on the world order and say of war, "This way of settling differences is not just." This business of burning human beings with napalm, of filling our nation's homes with orphans and widows, of injecting poisonous drugs of hate into the veins of peoples normally humane, of sending men home from dark and bloody battlefields physically handicapped and psychologically deranged, cannot be reconciled with wisdom, justice, and love. A nation that continues year after year to spend more money on military defense than on programs of social uplift is approaching spiritual death.