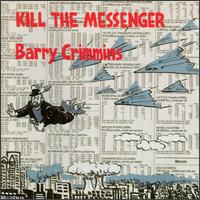 The year was 1991. The president was a man named George W. Bush, who had sent America into war in Iraq. The economy was lousy. Reactionaries were being appointed to the highest court in the land. The environment was being assaulted by ethically challenged corporate slimeballs. Healthcare was becoming less available and more expensive. Shocking revelations about how the White House had systematically flaunted the law of the land for the past several years were outraging many citizens. This Bush guy was falling into disfavor.

In October of that year, before the most memorable of the Clarence Thomas hearings had taken place, the Boston Baked Theater (later to become Jimmy Tingle's Off-Broadway Theater) in Somerville, Ma. filled to capacity two nights in a row for performance that were recorded by Green Linnet Records. Howard Zinn graciously introduced political satirist Barry Crimmins. The audiences were wonderful, Barry was on top of his game. Scathing humor lacerated deserving targets.The result was the critically acclaimed album, Kill the Messenger. Considering how many of the problems of 17 years ago still exist today, it's no surprise that this recording remains quite relevant. There is one one major change -- back then you had to spend plunging American dollars to buy Kill the Messenger. But as of today, this classic recording is available for free via download as a gesture of solidarity and generosity by former Green Linnet CEO Wendy Newton and (obviously) by Barry, as well.

They hope you enjoy the recording and spread the word about its availability. It's online thanks to the largesse and tech savvy of the redoubtable Scooter at acksis of evil. Thanks also go out to Otis McClay who slapped some sense into Barry when he was getting ready to give up on trying to get KTM online. You can stream the album cut-by-cut or simply download it by doing some right click deal with Satanic windows computers. On Macs  you hold down the control key as you click on each cut and then select "Save Link As" to save each cut. The artwork, including the cover done by the Boston Globe's Dan Wasserman, the best political cartoonist at a daily in America, is attached as a pdf file at the bottom of this post (but only when you click it open as an individual post on the blog page here. It will soon be available on Scooter's site as well.

Now Barry has another project he must work on for a few days so he said to say that he hopes this tides you over. It's absolutely free. No shipping charges, no registration required, no nothing except a chance to see just how recent the past has become.