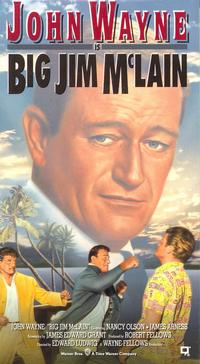 So your marriage to Bill was arranged?

FYI, Senator Clinton, you can't chose your family but you are allowed to divorce your spouse.
***
So did you catch last night's ABC-HUAC Democratic Inquisition?

Too bad there was no one there last night to ask Charlie Gibson if at long last he had no shame.

But give Stephanopoulos credit, he did a much better job with the Clinton talking points than the rest of her staff ever does. I trust he's in line for a raise.

Senator Obama isn't it true that your home state of Hawaii is in fact nothing more than a communist front organization? And wasn't this established beyond any doubt in the John Wayne documentary Big Jim McLain?

Hillary's only problem is she might have Tuzla flashbacks when they begin shooting. Meanwhile back at the HUAC/Philly....

Flag pins! They were actually asking about flag pins!

I think Obama needs to make a fashion move and start wearing jackets without lapels.

Let me tell you about flag pins. My father was forty years ahead of his time with them. He bought them by the long ton and every time I left the house, he implored me to fill my pockets with them so I could distribute them. Ever the dutiful son, I did as my father asked. I'd leave the house, walk a block to Skaneateles Lake, stroll onto the pier that jutted well out into the water and once I got fifty or so yards out, I would distribute the flag pins... usually overhand.

Clinton broke the old Rudy Giuliani record for most invocations of 9/11 in a two hour debate. I never thought I'd live to see that mark fall!

If she keeps this up, I'll personally ruin her by tricking her into posing for a picture with me.

Then I'll endorse the Weather Underground... which by the way has become so irrelevant that the only thing most people think of when it's mentioned is a meteorological website.

Sixties radicals and outspoken preachers don't scare me, but I'd hate to have to live down an association with ABC News.

And how come there was no Pledge of Allegiance at the top of the debate?

I knew they had broken Obama when he started babbling about George H.W. Bush's wonderful foreign policy.

By the end of the debate I was fantasizing that a cliched movie device would rescue us and Hillary wouldn't realize her mike was  still on as she was speaking to Chelsea, allowing everyone to hear her say,

"I'm sorry you had to sit out among those dirty, dirty people but it's all worth it because the suckers are buying this.  Oh, I just looooove the working class so much! Don't make me laugh! Let them go to Haiti if they need a job! Who do these chumps think I'm going to side with? Colombia and the 800 grand it paid your father to push the trade deal or those grimy urchins in Western Pennsylvania? Get serious! I can't believe we had to take you away from your important work at the hedge fund to come out here to help us con these goobers but think of how much more influence we'll have to peddle once we finish character assassinating the opposition."

A campaign aid comes up and whispers in Senator Clinton's ear as she becomes very pale and says, " Can you imagine, heh, heh, If I actually meant those things, Chelsea? But you have to  understand, these are just the kind of lies the media would love to try to make an issue of but .... OUCH! Tell them to stop throwing that stuff at me!"

But the audience is only egged on and suddenly large hunks of dusty black material are coming at Senator Clinton from all directions.

But then, the first part of my dream sequence already sort of happened .

Hillary's grandfather worked in a mill and her husband helped close it. Actually her grandfather owned the mill but that's not to say that it wasn't hard work starving all those employees to death!

The Supreme Court ruled yesterday that it's OK for states to resume executing people with lethal injections. This is by far the most progressive decision the current Roberts Court will hand down concerning drugs.

And a few I never got around to posting until now... The Compassion Forum had none for the audience -- particularly while Hillary Clinton was trying to use her self-proclaimed spirituality as an excuse to participate in more negative campaigning.

I politely disagree with anyone who considers the public vetting of presidential candidates by a bunch of holy rollers as an overdue  and positive development.

You won't negotiate with terrorists? Fine I won't appease dogmatists.

Whispering Johnny McCain chose not to participate because he didn't want to offend his base by kowtowing to anything as un-American as compassion.

The Compassion Forum was spiritually provocative, watching it made me wrestle with the thorny issue of suicide.

In the end I decided it would be wrong for Senator Clinton to kill herself.

Watching her wiggling around pretending to believe there should be any higher power in the universe than her, made me realize that if there is a supreme being it sure is cruel to make us sit through 45 minutes of  that hell.

Hillary says she worked to reduce teenage pregnancies by one-third which I guess means two-thirds of teen pregnancies are fine. Perhaps she doesn't want to alienate the FLDS vote.

The event took place at Messiah College at the Messiah Complex so you would have thought Hillary would have looked more at home. Senator Clinton is just like any of us -- out throwing down shots one night and nervously sweating out the hangover in church the next day.

One thing you have to say about that bar Clinton was drinking in -- lousy bouncers!

Finally, my summary, via headline, of the corporate media's coverage of the papal visit: