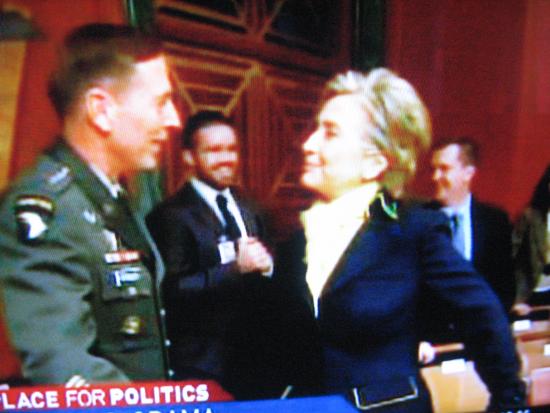 George W. Bush had been on pins and needles for the past week. The prez was all wound up because his big boss, General David Petraeus, was coming to town to remind everyone just who is running this country. A frenetic Bush oversaw spring cleaning to ensure Petraeus's white-glove White House inspection would result in a passing grade. It did, despite the indelible but understandable grime besotting the still vacant office of former Bush adviser Karl Rove.

Monday evening, the General and Dick Cheney enjoyed a hearty meal of braised Iraqi baby hearts while Bush was sent out on a mystery errand. It turns out W was at a D.C. Kinko's until the wee hours, printing a couple dozen charts the general needed for his testimony before the Senate Armed Services and Foreign Relations committees on Tuesday. The visual aids demonstrated how the marathon labeled as a sprint and henceforth known as The Surge had effectively reversed the polarity of dogs and ponies in Iraq.

Meanwhile, back at dinner, Cheney kept referring to this martial holding pattern by its proper appellation, The Stall. I guess you had to be there but word has it that through sheer repetition of this phrase, the VP had Petraeus laughing so hard he coughed up two tiny ventricles and and the cutest little aorta you ever saw. Despite Cheney's urging to join him in soaking up the balance of the evening's darkness, the career soldier, duty-bound to look his best in the morning, headed for his bunk leaving Cheney to face another night of un-death alone.

The Big Boss awoke at 5 a.m. and after being spoon-fed breakfast-in-bed and bathed and dressed by the president, he was ready for his big day. I tuned in during the photo-ops in the hearing room prior to the commencement of the Senate Armed Services Committee proceedings. Once the gavel came down, any nervousness Patraeus might have felt melted away as Chairman Carl Levin kicked things off by reciting prepared remarks that called to mind Luca Brasi's monologue at the Corleone wedding. Levin set the standard for every other Senator when he floridly thanked Patraeus and US Ambassador to Iraq, Ryan Crocker (of shit) for their --get this!--brave service to America and for the sacrifices they have made for their country. Petraeus snickered up his brass-plated sleeve, while the ambassador did what he does best -- remain completely impervious to what was going on in front of him -- a skill that no doubt made him the perfect choice for his current assignment. But as vacant as Crocker looks, at least he knows who he and Petraeus are working for and it sure as hell isn't the American people. Throughout the day the two spit out acronyms and abbreviations meant to obfuscate the grim reality of a five-year war that has so failed that flak jackets and helmets are de rigeur in the American compound at the center of the supposedly secure Green Zone in Baghdad. I'll take AQI for a billion, Ryan!

Throughout the morning, Republican senators helped the war shills run out the clock by making opening statements that threw up a secure perimeter of American flags and a human shield of American soldiers around an already poorly stocked Congressional marketplace of ideas. All day long the American public and other innocent onlookers gasped at the aftermath of the degradation of a coordinated series of multiple IED's -- Incredibly Evasive Dialogues --  carried out in broad daylight with the front office of Mass Murder Incorporated. Apparently, none of the carefully guarded questioners were fatally embarrassed.

Petreaus, a man so shifty that his value to the war machine is measurable on the Richter Scale, at one point implored the Senators to give American troops "enough time necessary to succeed" in Iraq. Demonstrating soldierly self-restraint, he refrained from calling for extending the sentences of the two million currently incarcerated Americans so that the prisoners aren't deprived of the opportunity to manufacture the perfect license plate.

The Big Boss showed off descriptive skills rarely seen this side of the L.L. Bean Catalog as he spoke of "fragile, reversible progress." He also regaled the assemblage with his dramatic tales of the Sons of Iraq, a ragtag former militia that has been convinced, with just a few dozen bales of cash to forgo killing American troops. I smell a reality series -- Coming up next on the Military Channel it's Bribe Brigade!

Crocker looked ready for his own prime-time program, Prevarication Nation, as he answered question after question with linguistically loopholed language. The ambassador is mealymouthed, beady-eyed and possessed of an oddly husky/high voice that's perfectly suited for dissemination of gibberish  such as, "News from Iraq in recent weeks has been dominated by the situation in Basra. Taken as a snapshot, with scenes of increasing violence and masked gunmen in the streets, it is hard to see how this situation supports a narrative of progress in Iraq. And there is still very much to be done to bring full government control to the streets of Basra and eliminate entrenched extremist, criminal and militia groups."

So, as with Abu Ghraib, the problem is snapshots.  Once he explained how, when viewing the violence "through a broader lens," it was obvious that this insurrection was actually a positive development, it was all a body could do to keep from finding George Eastman's grave, just to piss on it.

The Democrats, after mouthing the mandatory tripe about devotion and respect for our stranded troops, begged the witnesses for a schedule for our best and brightest to depart. Instead they were given a promise by Petreaus of a drawback of troop levels to pre-Stall numbers by late July, followed by a 45 day "pause" of troop withdrawals so that the situation could be reassessed. When pressed on the issue, Petreaus started talking about "battlefield geometry" and "political calculus," while refusing to discuss anything as mathematically obtuse as a calendar. By my own ciphering, this pause that oppresses adds up to five more months of keeping soldiers stop-lossed and redeployed, often to literal death, in Iraq.

Frustrated with their inability to pin down the two greased pigs before them, the Dems settled on a convenient target, Iraq itself. One senator after the next complained bitterly of oil-rich Iraq's failure to pick up the cost-plus cost of having Halliburton and other uber-profiteers rebuild a nation that the United States has brought to ruin. The nerve of some people!

Indiana Democrat Evan Bayh begged Petreaus for permission to disagree with him on the war but could only get the general to allow that "We fight for the right for people to have other opinions."  There was no refuting such firmly anchored reason because without this needless and insane war, opinion itself would be impossible.

Joe Lieberman (Imbecile- Ct.), looked like a reactionary lawn gnome as he expressed frustration because everyone couldn't "agree on the facts." If Joe ruled the world, facts would be furnished from a central authority and that would be that.  His fellow senators politely refrained from pointing out that facts are hard to ascertain in a war started and escalated by cold-blooded liars.

Hillary Clinton (Doomed- NY) asked a germane question concerning Petreaus's passing mention of how the US may have been planning an assault on Basra but didn't follow up when the Big Boss failed to answer her. Clinton also used her time to call for an 'orderly withdrawal' of US troops-- No talking! Stand up straight! And no hurling your weapons to the ground and weeping as you run for the C-130! Liddy Dole (R- Mayberry) looked great, said little and kudos were again in order for her mortician, a true pro when working with a few gallons of rouge and an airbrush.

Lindsay Graham (Weasel- SC), couldn't have carried more water for the administration had he pulled a tanker truck into the Dirksen Senate Office Building.

But presumptuous Gluttonous Old Party presidential nominee John McCain offered the highlight of the Armed Services hearing when he suggested, without laughing, that a US withdrawal from Iraq would "destabilize the Middle East." Yeah, we can't have that!

After several hours of testimony, we were again reminded that in this country live generals get much more airtime than dead grunts. I skipped the matinée at Foreign Relations because I needed some air myself.

Dribs and droppings: Last week on the Tonight Show, Hillary Clinton casually mentioned that she as been in and out of "lots of war zones." Really? Such as?

These Olympic protests are without precedent-- in the past it was always the angry mob that carried the torches.

It's Iraqi Freedom day so get out and knock down a statue!