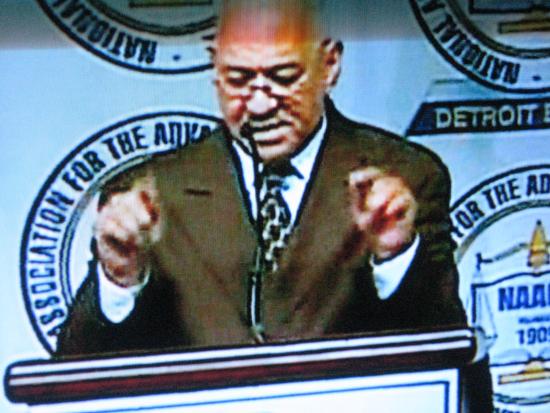 I turned to MSNBC's Morning Joke yesterday for 'analysis' of  the Rev. Jeremiah Wright's Sunday night speech to the NAACP in Detroit. It took both reactionary dandy Tucker Carlson and (still goosesteppin' after all these years) Pat Buchanan to generate the intellectual void normally provided by absent Joke host Joe Scarborough. I watched Buchanan only long enough to feel pity for the silly old man. If not for his falsetto voice, he'd be the natural choice to head up a lynch mob. In fairness, I must say my dogs Lettie and Lu would run through a wall for that crazy son of a gun.

Carlson prattled endlessly but the upshot of his analysis was simple: this coon in a collar has been warned but he's continued to badmouth the beneficent white people of America who have, up until this point, been too kind to remind the Rev Doc just who holds the whip 'round here. This means the Merkin people got no choice but to take it out on Barack Obama.

Viewing Carlson's self-satisfied taunting of Wright from a studio in Rockefeller Center was like watching some trash-talking video game player denigrate an NFL all-pro on his roommates team in a Madden '08 contest. Much like the virtual badass playing the video game, Tucker would wet himself if actually put in the presence of the target of his denigration.

Both Buchanan and Carlson chimed in after Wright's strong and entertaining performances on Bill Moyers' show and at the Detroit event but prior to his speaking at a National Press club in Washington yesterday morning. Wright, charming and nearly pitch perfect in Motown, seemed somewhat arrogant and egotistical in D.C.

But why should we care? We shouldn't, except he's giving the media and Barack Obama's political opponents yet another alibi to sound the silent alarm to a nation of racists confronted with the distinct possibility of a person of color in the house of white. Some of those racists are even considering voting for Obama because such an act would serve as a handy get out of jail free pass for all bigoted offenses, past and present. Hey, I voted for fucking Obama so don't go trying to say I'm a racist just cause I don't trust most of the rest of them people. Show me a good one and I'm willing to make him president!

The Clintons and the Republicans know it doesn't take much to awaken the sleeping maggot of racism in this country. This is why the endless questions about Barack Obama's qualifications to be president are being raised. The real panic about Obama is caused because he's shown competence at the one thing presidents must be able to do -- convince large numbers of people to vote for them. The so-called "buyer's remorse" the media and pols are wondering about is just a sanitized method of asking, "are people going to be sorry they elected this black man president?" It all serves as an extra check on a candidate  that's an extra check we've never known before. No sooner does he complete the Twelve Labors of Hercules than he's dispatched for the broomstick of the Wicked Witch of the West (and Clinton supporters are welcome to read whatever they like into that.) When asked to present three photo ID's, including a passport, as well as an original birth certificate --and he does,-- he's still pulled aside for further screening. The system is looking more rigged than ever because it is. Barack Obama, the candidate, is being treated with the same disdain as has been ladled upon black voters recently in Florida and Ohio or just about anywhere a few decades back.

Truly, skin color is the only thing standing between Barack Obama and the Democratic nomination. Anyone who thinks racism doesn't fit in Hillary Clinton's kitchen sink deserves to go down the drain with her. How long before she denounces the 11,000 or so attendees of the Detroit NAACP event for not getting up and walking out when Wright began to speak? The obsession with Rev. Wright is meant to remind voters that if we elect Barack Obama, we should expect more Negroes to think they have a right to speak up -- as if electing Obama would somehow indicate progress or something. We're supposed to pause and panic about a day when all  black people think they have a voice. On that day, they all might start talking about things like economic disparity, a criminally unjust legal system and a nation so insanely ordered that it would rather inflict devastation upon the rest of the world than bring relief to the devastated at home. Who wants to hear about that shit -- especially from those people? If the African American community wants a message, they'll get one and here it is: maybe, just maybe, we'd listen to one of you but if we do, the rest of you had better keep your mouths shut!

The message to a nation full of screwed-over white people is slightly different. They're telling Whitey: At this time in history, when you know there's nowhere to hide from a savage typhoon of corporatism, when you've been fucked out of everything from your job and pension plan, to your health care and even your home ... why not settle back into some nice, comfortable retro-racism and irrationally take out your frustrations on people for their skin color? Why not misdirect your outrage at them rather than aim it at the slime that's actually ripping you off? Come on, you know if you go after who's truly responsible, you'll soon be treated as if you belong in the wrong half of Barack Obama's family picture. So go ahead, boil over and scald millions of innocent people. You'll feel better! It's not much but it's all we have to offer you here in Goddamned America!

Yes, if you want to know how much Hillary Clinton, John McCain and the media disrespect you, all you need to do is consider who is the president while they ask us to agonize over whether Barack Obama has what it takes to reside at 1600 Pennsylvania Avenue. Face the facts, the threshold to that building was torn out nearly eight years ago. Those trying to scare us with questions of Obama's trustworthiness, assume we're bigots and play us as chumps. Sadly, they're probably right.