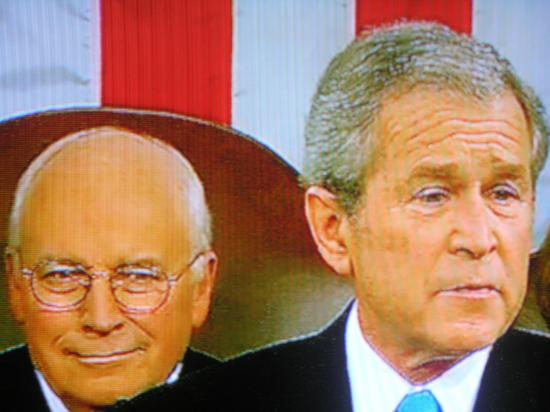 Who knows what kind of evil one is capable of -- particularly if born into the wrong over-privileged circumstances. There but for the grace of God go I -- in that limo -- oh wait, that's a decoy.

When poor people ask for something, reactionaries sniff and snort about "entitlements." They scrunch their noses at "the very idea that those people think they have anything coming to them." But dare not so much as a quizzical glance in the direction of the privileged class or risk getting labeled as an enemy to all that is noble about this country. His great-granddaddy hired Pinkertons, busted unions and starved thousands of workers and their families to amass that fortune and now you want to tax it when it's passed along? And what do you barbecue on the Fourth of July? Old Glory?

As an American, I don't have to answer that question -- unless and until the government (either domestic of foreign, depending on the extraordinary rendition factor) asks it repeatedly, while placing me under psychological and/or physical duress. I happen to know my rights! OK, OK, I happen to know what's left of my rights. And I know they are small and pitiful when compared to the presumed ((birthrights of someone like George W. Bush.

That W is weak of mind and absent of character only serves to underscore his need for special advantage. Do you think a poor boy could have disappeared from the military service at a time of war and then, a few decades down the road, become the Commander-in-Chief of the same military he abandoned?  If a poor kid so much as crossed the path of someone who did something like that, even decades later and with no knowledge of the acquaintance's past, it would be used against the pauper as if he himself had been the deserter. It would place any future political aspirations of the poor kid in grave doubt and the "issue" would be raised again and again as long as the poor kid remained in politics.

The lower you're social status at birth, the higher the standard to which you must answer. And so Barack Obama must be clairvoyant about everyone with whom he comes into contact whereas George W. Bush needn't explain even his own unsavory past. When confronted with any of a large number of significant questions he really should have answered before he became our court-appointed president, all Bush has to do is huff and puff like an annoyed heir until the unpleasant challenge evaporates. Why do these dreary people think they're entitled to answers?

If Barack Obama had a son as scummy as George W. Bush, he'd never get elected to anything. Unless of course he was also an heir, who knew how to do the nose scrunching thing as well as George H. W. Bush does the nose-scrunching thing when the paupers come along asking questions about his son. OK, OK any of his sons.

Now that Dubyahoo has pushed privilege to the breaking point and the peasants are about as close to revolt as they ever get in this country, he's turned his public residence into a private bunker. Calls for accountability bounce off a stonewall that's many yards thicker and several stories higher than the one Richard Nixon erected around the Rose Garden during an earlier White House crime wave. But then, Nixon wasn't born into wealth and so was still vulnerable to at least a degree of accountability.

Tricky Dick was eventually forced to reluctantly broker an end to the needless war he'd inherited --  and then escalated for much of his time in the Oval Office. Bush is now scheming to keep his needless war going long beyond his eight years of stolen office. And it doesn't matter what any of us think about it. Not even when three-fourths of the nation wants us out. Because 75 percent doesn't trump one rich little fuck in the White House. Since we can't believe the teensiest president even if he tells us it's raining during a typhoon, it's probably best that he privately plods along doing whatever he's going to do. Watching him come out to smirk and lie and threaten us with inane justifications for his despotic actions only serves to empty a salt mine in a festering national wound.

That said, the fact that as commander-in-chief his accountability is as spotty as it was when he was/ was not a National Guardsman does present certain problems. The most obvious being we don't know what he's up to. This does not preclude  us from agonizing over well founded fears and understandably wild speculation because only a fool puts anything past this guy.

The smart money (and there is so little of it because the rest is being hoarded by dim-witted heirs) sez W's planning to attack Iran so as to deepen his quagmire/legacy by several thousand leagues before formally handing the bag to a new sap next January.

But how? My guess is the Bushcists will wait until August, right before the Democratic Convention, when for the first time Americans will see a tape of a grisly massacre of US troops in Iraq. The graphic footage will first get leaked to FOX-News then quickly spread to all the mainstream outlets. Soon word will come that Iran was behind this shocking and brutal slaughter and that the United States has already responded -- in fact cruise missiles are now crashing down on Tehran! Take that, Islamofascists!

Privately, Bush and his handlers will celebrate the brilliance of hiding the gruesome horror of war from Americans until just the right moment. They'll know that had we seen this scene 4,000 times over, the only impact it would have would have be on the soulless scum that started this needless carnage. But by letting the suckers finally see some actual blood and guts, our shifty leader will be able to lash out against any target he chooses so long as he claims it's an "appropriate response." Sort of like how attacking Iraq was an appropriate response for 9/11. Bush will come out grim-faced and not even snicker as he promises to hunt down and bring to justice those who murder Americans. He'll refuse to answer any questions about the presidential campaign because this will "transcend politics." He'll tell us that he knows all Americans will "support this necessary action." He'll also mention that God thinks it's a swell idea. This presumption will weigh heavily on the Democratic Convention. What was supposed to be a celebration of liberation from eight years of Bush and Cheney will instead become the world's largest hot potato tournament. If the Dems question the assault on Iran, it will be a short wait for the attack ads that include a shot of Barack Obama dissolving into footage of the massacre. If the D's support the escalation of this war into yet another country then they might as well order some Depends embossed with the presidential seal for whispering Grampy McCain. It's a lose/lose for Democrats so at least they'll be in their comfort zone.

The one hope is to widely spread my theory of how Bush will justify attacking Iran. Several of us should disseminate it by denouncing it as "cynical and paranoid," while demanding that pundits do the same. They'll only be too happy to comply. Then if Bush still tries it, there will already a record of public discourse on the matter. It's a lot of trouble to go to but that's what happens in a country where it's George W. Bush's birthright to be a warmonger.