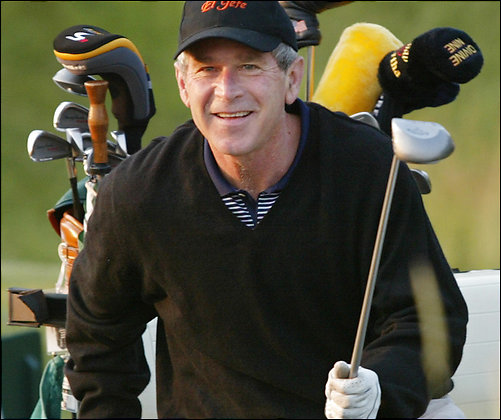 As you must know by now, George W. Bush has disclosed that he gave up golf in 2003 as an act of "solidarity" for the  families of American soldiers dying in Iraq.

As he made the statement, he clenched his golf-gloved hand in a fist and extended it skyward.

You can't help but be humbled when confronted with such selflessness.

I'm guessing the families would prefer he'd just give up Gulf Wars. That way, nobody would have to die and everybody could play a few rounds.

I guess he figures he's already in a bad enough sand trap.

So for now he's just going to find other things to cheat at.

He's also quietly given up hunting with the vice-president. Is there no sacrifice this disciplined man won't make?

By reducing demand for golf courses, he's increasing the land available for cemeteries. So he's thinking ahead.

Inspired by the president, I've given up polo and yachting until the war ends.

And no more summering in Monaco! Make my apologies to the gang at the casino.

On the upside, when the war finally ends,  W's father will be too old to beat him on the links anymore.

For a guy who has quit golf, the prez sure still takes a lot of Mulligans.

The generous Bush has sent his up-armored golf cart to General Petraeus for use in Iraq.

He's also sent along his clubs to the general so that after Petraeus futilely empties his sidearm at the teeming mass as its bursts into the Green Zone, he can battle  to the death with a 3 iron.

I think Bush put it best when he said to Congress, "Give me another sleeve of peasants for the war effort."

Since quitting golf in 2003, Bush exercises by fleeing responsibility ... often on a bike.

With Dubyahoo off the links, lobbyists now must send him their bribes via bike messenger. Maybe with this additional spare time, Bush will figure out that he's responsible for all those six-somes at funeral homes.

When asked if he would also forgo golf until the end of the war, Vice-President Cheney tersely replied, "Fore!"

TRAIL DROPPINGS
Seeing Hillary Clinton celebrate her win in West Virginia last night was akin to watching a baseball team, 19 games out of first place, beat a playoff team on the last day of the season and then spray champagne all over the clubhouse. It looks silly and has no impact on who is going to the World Series.