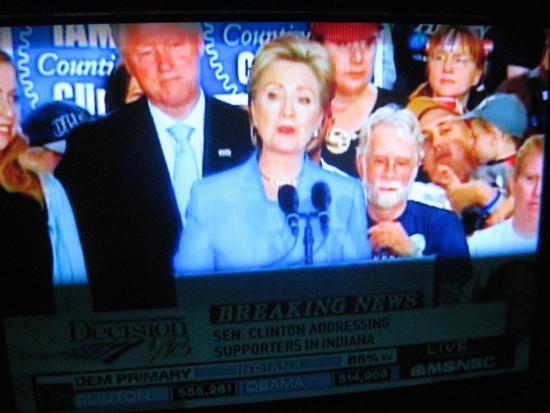 "It's full speed onto the White House," said Hillary Clinton last night, tossing caution aside and announcing a bold plan to level the venerated structure with a suicide bomb rather than allow anyone but her family to take up residence at the swank Pennsylvania Avenue address.

Before her late night remarks at Indianapolis' Murat Center, Clinton and her boosters suffered through a considerable wait brought on by the inability of Reich Limbaugh's supporters to reverse the will of legitimate participants in the Indiana Democratic Primary by any but the scantiest of margins. So the Hoosiers for Hillary stayed up well beyond their bedtimes, save for the  Klansman for Klinton who spend most evenings night-riding, cross-burning and harrying race-mixers as is the Ku Klux Kustom begun all those years ago on fertile Indiana soil. Hoodless, they were unrecognizable from other factions in the Hillarightist coalition, Operation Chaos.

The dragged out evening allowed physicians time to make some emergency pharmaceutical adjustments to the candidate. The psychotropic tune-up was  necessitated by a security breach that allowed reality, in the form of North Carolina Democratic Primary results, to briefly confront the New York Senator. Her pitiful margin in Indiana combined with the malicious Tarheel thumping to make for the cruelest kind of double-digit disaster she could face -- one in which she fell behind her opponent by at least another ten pledged delegates. Dawn came at around midnight for Clinton who now knows that unless she uses nukes as conventional weapons in Denver, she has no chance of becoming the nominee. None. This means it will be Barack Obama who tears the gift-wrapping off a doddering Republican opponent this fall. This means we will not be duck-duck-goosed by yet another Bush or Clinton presidency. And that means something.

Judging how she finally took the stage with a burst of frenetic smiling and waving, it looked like the medicos may have pulled off a miracle. But all too soon, gaseous rhetorical vapors began taking a terrible toll on both candidate and audience. Before it was over, everyone had wilted like orchids on an ice floe. As Clinton sung with the swans, her husband loomed behind her looking so red-cheeked that it seemed possible that he might actually be feeling embarrassment (although the smart money was on the former prez's involvement in an accident involving a tanning bed, gin and a junior staffer.)

Even if Hillary Clinton somehow managed to bludgeon her way to the nomination and then defeat John McCain this fall, her presidency would reek of Robert Mugabe, or even worse, George W. Bush. But it'll never happen because this race is over. References to the Eveready Bunny, Rasputin and trick candles that re-ignite have grown threadbare. Of course disillusionment with her novelty shop Lazurus act won't stop the New York senator from demanding that super delegates give her the nomination. The voters have had their chance-- now it's your turn! Right, and at the end of the regular baseball season, let's skip the playoffs and simply have the owners hold meetings to decide which team wins the World Series. As the night wore on and the crowd grew restive waiting for their candidate, Hoosier Senator Evan Bayh tap-danced the full length of the Indy 500 in an attempt to limit the spread of narcolepsy at the Clinton wake. In the meantime, Obama's remarks electrified the throng at his enormous North Carolina victory party while simultaneously euthanizing the hopes of Clinton dead-enders.

While waiting for the Indiana totals, the cable networks marked time by reeling in some of the slack from the jaws of their commentators, who finally seemed to have worked through the denial stage of their grief over the terminal status of the Clinton campaign. Serious hilarity ensued on CNN when Clinton family bootblack Lanny Davis, accustomed to leisurely swatting softballs in such surroundings, was asked to try to explain how his candidate could possibly garner the Democratic nomination. His clumsy response looked even shiftier as Davis squirmed in a suit last worn by Joseph Bologna as King Kaiser in the "Boss Hijack" sketch in My Favorite Year. Also on CNN was Clinton acolyte Paul Begala, who smiled falsely while attempting to write off Obama's supporters as a combination of "African-Americans and Eggheads." He cautioned that Obama would alienate "working class whites." Begala made himself scarce after spewing this anti-intellectual and racist bile. Too bad no one bothered to ask him why working class blacks don't matter. Nor was he challenged on his assertion that white working folks simply won't vote for Obama because, we were left to conclude, the only thing they hate more than black people is smart black people. And no one bothered to call this Bill and Hill apologist on the most glaring insult of all-- it was W.J. Clinton and his so-called "free trade" deals that backed up the trucks to America's loading docks and jammed them full of decent jobs for deportation to the Third World. Conscience-free trade has screwed over working class people of every background and stripe. So now we're supposed to hate one another rather than the Clintons and the slime at the DLC and their corporate masters who have sold our decent and secure lives down the river and across oceans for the sake of profiteering? Spare me. As the race in Indiana grew as tight as the grip of the political grim reaper on the Clinton Campaign, I thought of Paul Begala and did some smiling of my own. Unlike Begala's, my grin was genuine because it came at a moment when I knew the shameless, unethical and divisive campaign of Hillary Clinton was taking its last few zombified steps. I smiled because I knew that finally a drain had been installed in Clinton's notorious kitchen sink and that its vile contents were gushing onto the Guccis of the candidate and her strategists. What a tragedy for the working class!

In a week in which Clinton promised to bring down both OPEC and taxes at the pump, one thing was clear last night -- her campaign isn't cooking with gas, it's just cooked.