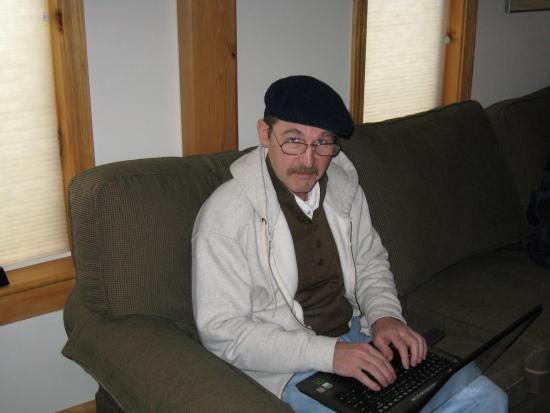 I'm preparing to get out of town to do get to Regent Theater in Arlington, Ma. to benefit Ding Ho original Bob Lazurus. Laz has been walloping the daylights out of leukemia, an unpaid, yet full-time endeavor. So the kids are putting on a couple of shows -- Jimmy Tingle and Tony V have doen the heavy lifting on production and here's to them! The Sunday show has sold out so we've added a Monday Ding Ho Reunion. Tickets have just gone on sale for Monday so scoop 'em up!  The last time we did one of these full-blown reunions it became a show that everyone claims to have been at. So please come out and see some  tremendous comics for a wonderful cause.

Speaking of reunions, my oldest pal in comedy, A. Whitney Brown, popped in and since I was busy getting ready to travel, I told him he was today's guest columnist. And so without any doing further, please welcome A. Whitney Brown!

I am your guest blogger. My name is A. Whitney Brown. I write from Barry's Hermitage in upstate New York, a hidden glade invisible from the road, shrouded by day in the bleak and stark greyness that haunts these hills, hidden by night among the treacherous fogs and sudden mists that slaughter by hundreds the impaired drivers. I lost my last car here, turned turtle into an erosion ditch. Don't try to find this place.

I'm in a period of transition. You see, I never expected life to be this long. Life is short, I always heard. It doesn't seem like it.

Or maybe it's just the Democratic primary that seems to go on forever. But something is wrong with me. I find myself saying the unthinkable, the unacceptable, I find myself way out of the mainstream. Like everyone, I've come to despise the Clintons. Bill has become a buffoon, as Barry says, the Willie Loman of politcs, the very model of what the great W.C. Fields made a career of parodying.

Hillary a screeching, shameless harpy, a were-candidate, a shapeshifter, a Grendelian soccer-mom-night-shift-gas-pumping waitress who has had not just a driver, but a convoy, for over three decades. And the voters are buying it. They want to tip her a little over the usual 15%.
And I thought the re-election of Bush was the apogee and epitome, of American stupidity. Oh, no. That, we now know, is a bottomless barrel. An abyss of ignorance that has yet to be sounded. And this is where I go off the tracks.

Because it is unjust, it is morally unacceptable, that stupidity this profound should not have consequences. A just man, a man with any conscience, must mourn, must cry out for punishment, for atonement. Is there no God, no karma, no righteousness, no power on earth or heaven that will intervene?

We  burn our food in our SUV's. We murder at will, and complain that it costs us so much. Our foreign policy is simple armed robbery. We torture, we 're-educate.'

There are those of us, Americans, steeped in American ideals, American patriots, who celebrate the North Vietnamese victory to this day, a power that finally provided consequences for hubris and greed. Will the Iraqis stand up and defend their honor? Can the united Islamic world defeat this stupidity and greed, and drive us from their lands with our tails between our legs, helicopters ferrying the cowed survivors off roofs in the Green Zone? Please Allah make it so. It is devoutly to be hoped by all who cherish the values our forefathers died and starved for in the huts of Morristown.

Surely the souls of the Good Puritans who set this foundling nation afoot cry out from their hallowed graves for atonement.

I know in my heart that I can love this country again. Because I love the land itself. 400 years my people have walked it and we liked it well. But atonement must come, for the torture, for the greed, for the murder.

And so I find myself hoping the American people will be stupid enough to elect John McCain in this election, for the simple reason that stupidity must have consequences if the world is to be set aright.

But that is Naderism, pure and simple. That things must get worse before they get better, and of course it never works out that way. They just keep getting worse. But justice will come.
One day, a hundred million light years away, a dying star will collapse into a black hole, or two circling neutron stars will finally collide, releasing a burst of gamma rays so powerful it will be seen in galaxies not yet born for billions of years, and that burst will happen to be pointed at a remote and inconsequential arm of the Milky Way, and the earth will be sterilized in a hundredth part of a second. It's a comforting thought.