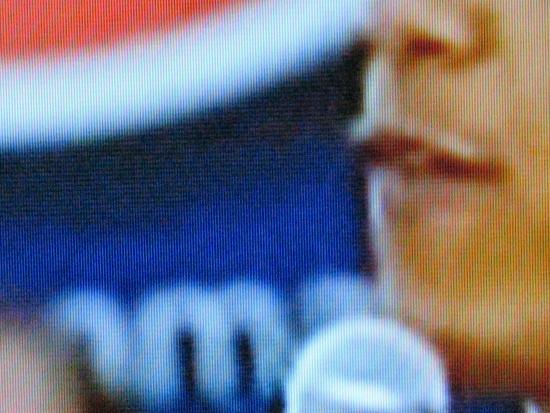 That gasping you hear emanates from the canary in the mineshaft. His name is Barack Obama and even though he's a compromised and ambitious politician, he represents the closest thing to living, breathing hope most of us have in this year's US presidential elections.

With his respiration ride our aspirations. Aspirations that we could actually demand and expect change in this country. The reason for these deep breaths of hope? An awareness shared with millions of others that unless things change for the better, and fast, things are surely only going to get worse. Much worse. The Bush-Cheney era has taught Americans that no matter how awful things get, tomorrow brings a grim likelihood of lower lows. So of course Obama's themes of "hope" and "change" resonate much more profoundly than do Hillary Clinton's verbose and endless slogans du jour. Despite the fact that Obama remains pretty vague concerning his policies and behaves in as non-threatening a fashion as possible, he's still had a bright target painted on him.

The powers that be get nervous when the normally complacent peasants start attending things like campaign rallies. The only kind of electoral events America's bosses like to see are those peopled with dupes who have no choice but to attend -- the kind of gatherings that are full of joyless pawns of political machines and/or religious automatons who had no idea where the bus was taking them and/or employees of some corporation or industry that also employs, for all intents and purposes, a given candidate. Obama (or more accurately --the possibility that he isn't as awful as the usual American political fare) is inspiring people across the country to work in his campaign. He's attracting folks to electoral activism who'd normally be home watching American Idol or trying reach level 38 of Interplanetary Zorg or using their computers for viewing pornography rather than as organizing tools in a presidential campaign. Many of these new activists are young Americans, who should have been drunkenly living it up this past spring break rather than soberly organizing wards and precincts in primaries and caucuses. These kids are not yet broken and cynical. There's no place for such individuals in modern American politics so they are making one of their own. In the process they're threatening and annoying some severely powerful people - severely powerful people who want to extinguish every ember of hope in their youthful hearts.

Remarkably, the possibly non-awful Obama has inspired people to finance his campaign -- a political job traditionally reserved for polluters, profiteers and pigs who prefer wallowing in things just as they are. In fact Obama has raised enough money to say "no" to the slimy powers that be -- at least now and then. This isn't good because the big boys don't trust anyone they don't own. And so to them, Barack Obama is unreliable. This of course recommends him to regular folks and they've responded by giving the Illinois Senator victory after victory in various Democratic contests.

This made the men in the shadows angrier than ever-- why didn't the public see this guy for the untrustworthy, unproven candidate the powers that be know him to be? Particularly when there are two perfectly viable known commodities other than Obama to choose from? There's John McCain, bought and paid for early on in the S&L scandal of the Eighties. This ethical dust-up left McCain no choice but to talk like a reformer after that. But talk is cheap, just like McCain was when he was bought and paid for all those years ago. Around the time kitchen sink entered the political lexicon, the Campaign '08 bilge pumps failed and have been out of service ever since. Billions of gallons of political sewage has stood untreated and grown more vile and virulent with each passing news cycle. It's a rare hour that escapes without pundiots telling us that we're 'worried' because 'we really don't know' this Obama feller. Is he really ready to be president just because millions of Americans think so? Not that the Clinton campaign and the McCain campaign and the media has anything against all these voters  -- no -- they just aren't convinced it would be wise to allow so many people with such limited vision to choose the next president. You see, in case anyone hasn't noticed, these folks are all color blind!

Otherwise these naive people would be upset that this, um, product of race-mixing went to San Francisco to tell a bunch of queers that he hates guns, the real Jesus and white people. And sure, he seems pleasant enough, but have we gotten a load of his whacked-out minister who said a crazy thing about AIDS, therefore proving that every other complaint he has made about this country's domestic and foreign policies is invalid? And isn't this especially disturbing since this so-called Reverend says these things as if he actually believes them?

And why should we trust Barack Obama, a man who knows better than to show his naturally raging Negro anger in public? How are we supposed to believe that he's finally gotten mad -- and in public-- at this minister, for saying things he says he disagrees with. He doesn't get that mad when Hillary Clinton or John McCain speak and quite frankly everyone knows the shit they say is crazy. So does this mean he disagrees more with Rev. Wright than he does with his two political opponents?

On a personal level, I'm disgusted over Obama's politically expedient show of temper. But because of those millions of people grasping at hope, I can't let my disdain mutate into tacit support for Hillary Clinton. I'll be damned if I watch her surf on a wave of racist puke to the Democratic nomination. I understand that in this bullshit country, no one can get elected to anything without swearing they believe our pariah of a nation is in fact God's gift to humanity. This screening process guarantees we are governed by assholes or cowards or both. In this noxious atmosphere, I'm becoming a bit lightheaded. The candles are flickering and the air is getting a little close. But, like Barack Obama, I'm still breathing.