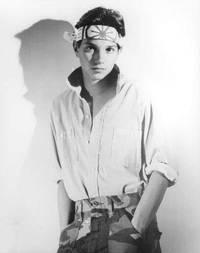 "If there is one word I would use to sum up the atmosphere in Iraq -- on the streets, in the countryside, in the neighborhoods and at the national level -- that word would be fear."

Now the Iraqis have a fear-based democracy.

And that ain't progress??!!

Dubyahoo must be so proud.

And he should be proud -- he and William Gates have worked so hard at their acting lessons and they're beginning to pay dividends.

Now Bush and Gates can blubber on cue over the war -- like ballplayers announcing their retirements.

Talk about your crocs!

And can this administration get any more ham-handed?

Chertoff's gut hurts and the next thing you know everyone realizes that we are still at risk.

Of course his gut hurts. Do you have any idea how much fecal matter the average Bush Administration employee must ingest each day?

In any case, he told a newspaper that his gut hurt and the next thing you know we're all supposed to feel like we're in more danger than a toy poodle at Michael Vick's house.

A security report gets leaked and spun more than salt water taffy.

And then that ridiculous al Qaeda training film turned up.

They showed it 52 billion times this week.

There were silly guys in hoods practicing martial arts on each other, there was synchronized diving into water and jumping through flaming hoops.

I swear I saw Ralph Macchio at one point.

This was supposed to make us realize that if we leave Iraq it would permit these people to plan an attack on America right in its most vulnerable spot... the flaming hoop.

I have to admit that I have not lit one hoop since seeing the video.

But I guess that's just the price of living in a post-9/11 world.

We have to be vigilant -- these flaming hoopsters are a clear and present danger. We have no time to worry about silly American militiamen training for fantasy wars. Not when there are people who can dive into water, two at a time! And they're out there just waiting for us to let our guard down so they can jump through our flaming hoops.

Of course not even militia members are as silly as Democrats and their symbolic slumber parties.

Excuse me, Senators, but you should have been losing sleep over this war before you helped start it.

And what with global warming and all, the burning of midnight oil is not exactly a practice you want to encourage.

Unless of course it's for something genuinely energy efficient... like impeachment.

But staying up all night to blather about the 'redeployment of our troops?' Please.

How about redeploying our troops to where they belong? Home.

Then we'd have the National Guard in the nation. Now there's an idea!

Why leave this country defenseless for another hurricane season?

Because I've seen radar of hurricanes forming off of Africa. They are openly preparing to attack someone.

This radar scares me a lot more than recycled footage of Osama bin Laden or those ridiculous ninja/Esther Williams/ Lassie training films.

Although hurricane radar doesn't scare me quite as much as Democrats making symbolic asses of themselves.

Because to watch them in inaction is to realize that we are going to get tagged with a Cat 5 'cane of comeuppance.

Because we the people are the ones who have allowed the Democratic Party to do such a poor job of representing its core constituency: we the people.

And so good old-fashioned American salt of the earth is left to bake dry in the ever-stronger rays of the sun.

And it's is drying up and blowing away a grain at a time. A stolen job here, a wasted life in Iraq there and legions of children left behind everywhere.

Leave it to the Dems to miss when they go to hit the mattresses. Or cots.