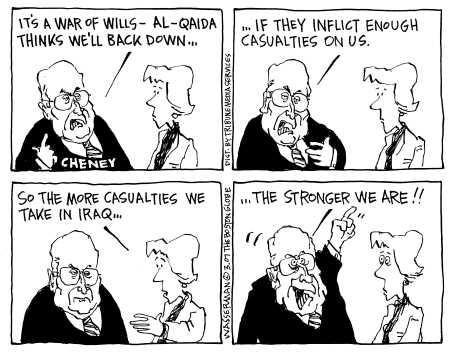 Sorry, but I have to respond to Dick Cheney's latest offensive offensive:

Yes, flying in the face of reason certainly is a tough task.

We wouldn't want to risk sending the wrong person out to do it.

For instance: it would be calamitous to assign an honest person the job.

Or as Cheney would put it, "task the mission."

Al's only hope now is brazen prevarication. The truth is here. Al will burrow underneath it and attempt to undermine it. It's a long shot but I think we all know there is no one better suited to the operation. Now let's synchronize our watches. I have September the eleventh...

They're always using melodramatic martial lingo. He's on a difficult assignment. That's all I can say so let's go to the club, sit in leather chairs, drink some single malt, make no mention of our overt latent homosexuality and wait for word.

After he finishes the difficult assignment, we'll be sending him on a tricky mission. It seems our old friend Jimmy-Jeff Gannon-Guckert, code-name JJGG, has gotten himself into a bit of a sticky wicket. Found himself married in Massachusetts to a warrant officer named Emile.

My subordinates will release the fish at 0-five-hundred.

Reverend Ted will come and bless the waters, (If I know Al he'll bring a nice surprise for the Rev from the DOJ evidence room)

Cheney asserts, "I think the key is whether or not he (Gonzales) has the confidence of the president  and he clearly does."

Bush is clearly confident that Gonzales will lie for him and that's all that matters.

The very legislative branch Cheney hides in when the heat's on in the executive wing.

But now that the legislature isn't being friendly, he slips back over to the executive branch to criticize it.

Why not just get it over with and move the VP's office to Dubai?

At least he'd be nearby an organization to which he is accountable.... Halliburton.

Cheney said he disagreed with the jury's verdict in Libby trial.

Then again Cheney doesn't agree with jury trials in the first place.

Or trials for that matter.

Not when he's available for duty as judge, jury and executioner.

The only verdict that would have pleased Cheney was one that resulted in the capital punishment of Patrick Fitzgerald.

Considering all the vacations he and Bush take, it figures he'd look upon himself as a tourist.

When asked about the administration's abysmal approval ratings Cheney said, "The polls are notoriously unreliable, in the sense that they change all the time, they bounce around all over the place."

Unless of course if you look at the approval ratings for your administration, which have been mired around 30% for months now.

But if he's talking about the polls on presidential election days-- I couldn't agree more. They have become completely unreliable.

Cheney said, "If I were in business to be popular, I suppose I'd be worried about my poll ratings and so forth."

Talk about copping to the ultimate privatization!

When Larry King asked him about his final throes quote Cheney said,"I think the insurgency turned out to be more robust."

Leave it to Cheney to make it sound like an assessment that has led to two more years of unbridled carnage is just sort of a wine-tasting faux pas.

Surprising overtones of IED's and a none too subtle hint of civil war.

A much more startling finish than I expected.

Speaking of administration lapdog General Betrayus, Cheney said, "He's mentioned everywhere, and it's because he is, I think, very highly regarded by the troops..."

So you polled the troops?

Does this mean Betrayus is in the business of being popular?

Cheney also maintains, "I think history will judge us well."

Yeah, providing the court docket at Nuremberg isn't too crowded.

And finally an exchange that all but the pathologically deluded will see as Cheney lying in a fashion makes Alberto Gonzales look like Abe Lincoln. Larry King: In that regard, The New York Times -- which, as you said, is not your favorite -- reports it was you who dispatched Gonzales and Andy Card to then-Attorney General John Ashcroft's hospital in 2004 to push Ashcroft to certify the President's intelligence-gathering program. Was it you?

LK: That would be something you would recall.

THE VICE PRESIDENT: I would think so. But certainly I was involved because I was a big advocate of the Terrorist Surveillance Program, and had been responsible and working with General Hayden and George Tenet to get it to the President for approval. By the time this occurred, it had already been approved about 12 times by the Department of Justice. There was nothing new about it.

LK: So you didn't send them to get permission.

THE VICE PRESIDENT: I don't recall that I was the one who sent them to the hospital.

Why not just get it over with and tell us that your family is in the legitimate business of importing olive oil, Dick?