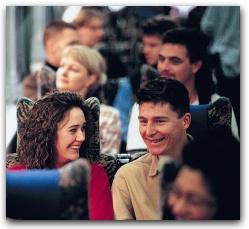 Good news for that 'bridge to nowhere' that's the pet project of disgraced Alaska Senator Ted Stevens -- it now has a destination!

In fact it has two destinations: Minneapolis and St. Paul.

Although it's a bit excessive to refer to Stevens as 'disgraced.' Clearly nothing can disgrace the man.

Which makes him just the kind of leader to whom Americans flock.

I fully expect Stevens to say that yesterday's disaster vindicates him.

After all, when bridges to nowhere collapse, no one is on them to be killed or injured.

We won't know why that bridge collapsed right away.

We'll have to wait for Pat Robertson to explain it to us.

I'm guessing it has something to do with homosexuals and teaching evolution in Twin Cities schools.

The best hope for the residents of Minneapolis and St. Paul lies in the fact that they don't live at the other end of the Mississippi.

If that bridge had been way down yonder, it would never be rebuilt.

Because the federal government looks upon disasters is New Orleans as simple cost effective demolition.

A lot of people are suddenly getting on the 'renew the infrastructure' bandwagon. And they'll stay on it... until it approaches a bridge.

Perhaps the I-35 bridge was worn down by FEMA ice trucks driving aimlessly back and forth on it during Katrina's aftermath.

FEMA is headed to Minneapolis with emergency duct tape and plastic sheeting to repair the bridge.

Of course Congress will now begin to scream about repairing the infrastructure... until it comes time to fund the repairs -- they'll burn that bridge when they come to it.

We don't have time to fear crumbling bridges, overpasses and highways in this country -- not when there the world is full of sneaker-wearing terrorists looking to smuggle deadly shampoo onto airplanes.

Someone should tell George W. Bush that metal fatigue only has to reach critical mass once to succeed in causing serious harm to the American people. But the engineers have to be right 100% of the time.

And considering that this country is literally going into hock for a trillion dollars (and you know that that figure is low) for its alleged war on terror, you can bet metal fatigue is going to get luckier and luckier all over this nation.

Pretty soon it will be safer to drive a truck in Iraq than in the United States.

Americans have a choice. they can either write a blank check to enrage the rest of the world to the point where millions of people join the still relatively small ranks of terrorists or we can bring our resources home to make sure that it is safe to travel around this nation.

The only money Bush wants to spend on our highways is to add checkpoints to them.

One way or another, what goes around comes around.

If we go bankrupt attempting to stomp our boot heels down on the rest of the world, the vibrations from those boot heels will eventually cause our own nation to crumble and collapse.

Yesterday's disaster was a wake-up call. We can't afford to hit the snooze alarm.

Because the homeland isn't secure until its residents can travel about in confidence that they are as safe as modern engineering can make them.

And by the way, so long as we are looking to retool the infrastructure, let's do it with an emphasis on mass transit.

As of July foreign vehicles sold better than their American counterparts. The age of the gas-guzzling auto is ending.

We have to turn off NASCAR and start racing toward mass transit.

Because as I have said time and again: it's mass transit or mass murder.

Cars divide and conquer us.

In a car everyone else is your competition.

People die everyday in silly attempts to gain a stupid car-length on another motorist.

Put those same people on a train and they may very well strike up conversations with the people that on a highway they release rage upon.

They may get to know that they have common destinations, and even common interests, with their fellow passengers.

Because we're all trying to get somewhere.

And it's a lot more fun to travel with friends.

So God bless the people of Minneapolis and St. Paul and Baghdad and even (sorry Barack) Pakistan.

We're all heading for the same destination.

Let's do all we can to make the trip as enjoyable and safe as possible.