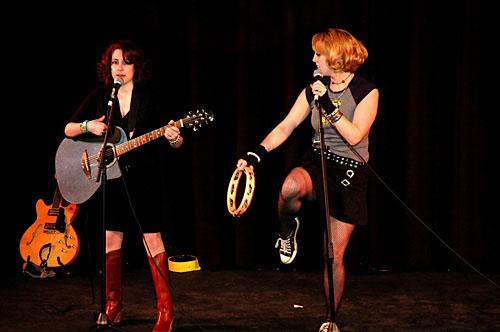 The Steamy Bohemians do it.

Several well intentioned people have suggested that I post my writings on other websites. Rest assured I've been doing this for years now -- it's what puts the 'inter' in 'internet.' That said, I'm reticent about posting my material on certain sites or even linking to several very popular web destinations.

With all due respect, Arianna Huffington is still a millionaire and I really can't see attracting people to a website, named after her, profiting her, that pays me nothing. I was a progressive activist when she was still an extremely reactionary operative. Her power resonates from connections she made because of her fiscal privilege. I'm glad to see she has seen the light-- at least to some extent. I'd think a lot more of her if she'd start paying people like Dennis Perrin, Rick Overton and Paul Krassner for the essays they write for her site. My three old friends and many other Huffpo regulars aren't hobbyists -- they've been telling the truth in witty and accessible fashions for years. They should not have to give away their insights to a millionaire who always takes top billing. Huffpo is hardly the worst offender -- it just offends me that this ex-reactionary seems to be getting something for nothing (and fuck "exposure" -- I have had Chernobyl levels of it and it's never paid one bill).

I'll link to Huffpo but never to any Myspace pages, unless of course there's significant news value in doing so. Myspace is owned by Rupert Murdoch's newscorp. As hip as you might think you have made your little portion of that mega-networking portal, all you're really doing is driving up Murdoch's advertising rates. Rail as you might about FOX-News on your Myspace page, if you post there, you're funding its parent corporation. That's not hip.

What we need is "ourspace." In other words, if we want to network with people in a shared area, we should do it in a cooperative fashion. Unfortunately ourspace.com is reserved by the uber capitalists at Big Daddy. Ourspace.org is a website run by a Canadian couple. They apparently enjoy hot-tubbing with, in the immortal words of Don Gavin, "old people and their parents." At least they seem to be having fun -- so good for them. In any case, a site's name matters little. It's the idea that counts. And the idea here is simple: there is nothing cool about being duped by a bloodless, heartless corporation into thinking you're a rugged individualist. All you are to the online Goliaths are eyeballs for them to sell to other corporations, that want to sell you shit that, in all likelihood, you don't need.

When Time Magazine named "You" the person of the year for 2006, I sent off a pithy two-word letter to the editor. The second word was "you." For some reason it wasn't printed. What annoyed me was that a major corporation (Time/Warner) celebrated a corporate scam that exploits the fact that so many working drones live horrid, faceless existences. People desperate to forget their hugely wasted lives as cubicle slaves are quick to bite on anything that implies that "you" or "my" matters. Face the facts: working for months on a project only to have your efforts ignored or stolen by a 'superior' makes people pretty desperate for recognition. This is a natural and healthy survival mechanism. It's a survival mechanism that's kicked into gear millions of times a day by the humiliating insult that is corporate dronage. It's exploited by Myspace and many other corporate online entities that just want the goods on you. You hand over the goods when you sign up and give your demographic information. It targets you for sales and it adds you to broader demo snapshots. I know how to avoid this stuff-- I sign on as a 98 year-old women. They can't figure out what to sell me. ( Full disclosure -- I do have a myspace account-- I went and set it up at the encouragement of others. I then checked out the overall scene for about ten minutes and never returned.)

Obviously the web is for interaction. We should use our computers to express opinions and to share art and ideas. We should be reaching each other in previously unimaginable numbers... but we should be doing it on our own. As soon as someone sells what they have developed to avaricious corporate forces, we should look for the next good idea. Because truly all that has been sold is us and our eyeballs. If the founders of the sold site are worth a damn, they'll help fund new ideas and pay for the web-hosting, to boot.

Show business has been all but ruined by corporations. (OK, more ruined.) Nowadays shamelessness and desperation are entry level requirements for young performing artists. This is why we're seeing fewer and fewer shows that require skilled performers and writers. Reality programming is just scab programming. Both the Writer's Guild and the Screen Actors Guild have contracts that will run out within the next year. The