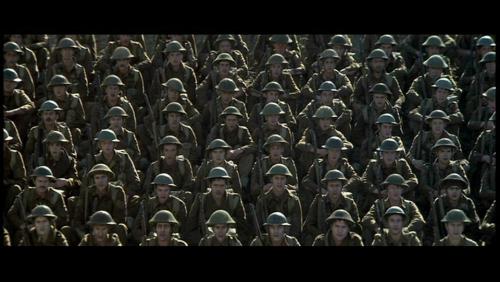 All heroes, all the time.

Anyone who says our troops are overseas defending our freedom is either a buffoon or a mealy-mouthed liar or both. Our American freedoms have been nothing but curtailed as a result of the current wars. Osama bin Laden isn't responsible for the curtailment. The blame is properly assigned to George W. Bush; a weak-kneed legislature; a fascist judiciary and a compliant and cowardly public. Bush has pushed for an evermore authoritarian state. Congress has rarely resisted, the courts have generally rubber-stamped his nefarious efforts and the public has sheepishly acquiesced.

As if the troops weren't in a big enough world of shit, everyone hides behind them. Every soldierly deed is deified, not for love of the soldiers but for need of saintly cover. Troops' motives are always pure; their standards the highest of the high. Not one soldier has ever fallen as a result of carelessness, cowardice or stupidity. No soldier ever dies performing a mundane task.

The mess of useless death is swept under a carpet labeled "heroism." And so every death, no matter how mundane or ignominious its circumstances, claims a selfless hero. The dead are not allowed to rest in their graves but instead redeployed as (formerly) human shields for those who don't want to discuss the hard truths of a failed war. The living troops are also deployed in this effort since the only time we are supposed to consider the danger they're in is when we are being told to remain respectfully silent about it. Anyone challenged by rational questions immediately takes cover behind the biggest pile of camo-wearing corpses and active troops that can be found. Any challenge made at that point is made at the risk of being labeled a "hero-defiler."

And so the truth is left out of it. We aren't supposed to say that we feel sympathy and compassion for so many young and underprivileged people who have been so misled and misused by cynical flag-waving Babbits. We never can say that our military is full of a bunch of kids who saw no other way out of their dead or dying hometowns. They couldn't afford college, there was no work at home so they said, " Ah screw it. I'll join the army. It can't be worse than here."

About five minutes into boot camp, the lucid ones realize they'd have been better off working the late shift at a convenience store. It doesn't take long to learn how big and stupid and dangerous things are in the military. Even when there's no war, the body count rises. Jets crash, ordinance explodes, vehicles overturn and soldiers die. When war starts, it's only worse. Death comes from all directions. Enemies fire at you; the ground beneath you explodes and too often your own comrades are responsible for the one with your name on it.

I'd sooner send a child to Catholic sleep-away camp than into the US military. To listen to those who proudly stand behind the troops (and the operative word there is "behind"), you'd think I'm absolutely crazed. What kind of lunatic wouldn't want the chance to have a child called a hero on television? After all, you can't watch CNN for ten minutes without a reference to a slain soldier in this fashion.

Out of common decency returning troops are forced to propagate the myth of soldier = hero. For starters, combat veterans do know of some truly heroic acts. They have seen others lay down their lives to save their comrades. They have seen others survive daring bids under fire. The problem is they may have seen some of these same heroes do some pretty stupid stuff. Perhaps the "hero" got them into the mess that resulted in circumstances that called for heroism. It gets complicated but not back home where all dead, wounded and active soldiers are the equivalent of Sgt. York. And all veterans were fighting to protect our freedom and not, say, the proliferation of military industrial complex profiteering. And so a code of silence is imposed upon soldiers. They see friends and families of slain soldiers and realize they are much more comfortable with the myth of a heroic death rather than the reality of a needless one. So they swallow the truth and chase it with a few more gulps of pain.

The big lie begins with the 'life -giving' side of war. All slain soldiers give their lives. Skeptics have argued, to no effect, that these soldiers' lives are taken from them. But this sensible conclusion is trumped by emotion because if you end up cold and dead in a war zone, you're fodder for the hero industry. And we are expected to maintain deferential silence about those who can no longer speak for themselves. Unless. of course, we use them, from beyond the grave, to endorse their own untimely deaths. It's fine to speak for them so long as they'd have never changed a thing. The wonderful attitudes assigned to our heroic dead are used to recruit their replacements. Thus the young and body bag-ready are fast-tracked down the hero highway. And when they are, in turn, zippered up for good, they won't have a thing to say about it Everybody's well behaved in the morgue. The modest hero; the soft spoken hero; the quiet hero... all these are trumped by the eternally silent hero.

The currently popular ideal of the passive dead hero, celebrated for being predictably chewed up by the war machine after deployment onto the conveyor belt labeled "enter here, ye of no other options... " does make for some strange coffin fellows. You can get the stringbean skinny kid from a stinking refugee camp, booked for a trip to eternity strapped to a dynamite belt, right next to a two-sport letterman from a Michigan high school who never made the honor roll but was smart enough to look around back home and see that there were zero decent jobs or any plausible hope for the future. So two soldier martyrs come from different dying places that furnish their underpriced offspring to the noisily waiting wars. The two new applicants for a hero tag and a burial remittance for mom are easily harvested by the plain spoken lies of the recruiters, the fancy phrased mendacity of the ministers or mullahs, the false quick talk of the TV pundits and the elegantly layered fibs of the older ladies and gentlemen who point the way to war. And so the children are made ready to be sent off to glory, out of town a little or a long way, to gamble and/or waste an entire life and hope for the best, rumors of a rigged deck notwithstanding. But never fear -- worst case scenario... you're a hero. And that's a promise, kid.

The good news is many veterans have figured out the truth and are telling it. Many more simply seethe with quiet contempt for the hero-addicted public. We all see the propaganda but only the vets see, and live, the reality as well. How much longer will America continue to insult her soldiers simply because Americans have a need to tidy up the truth with shallow greeting card sentimentality?


Looking for a hero? Try Pat Tillman. Tillman was smart enough to examine what he was really fighting for in Iraq and Afghanistan. His examination led him to decide he had served in the wrong place for the wrong reasons. And so he opposed the invasion of Iraq, voted for John Kerry in 2004 and planned to meet with Noam Chomsky when he returned from combat duty in Afghanistan. As we know, he never made it home. As we are learning, he was heroic until the end, steadying a comrade under fire before he was taken down with Annie Oakley accuracy by his own brothers in arms. Was it just friendly fire or had he become too much of a threat to the Bush propaganda machine? His family wants answers and millions more echo their demands. There is a public outcry for a thorough investigation. Obviously a slain NFL star could be exploited to recruit new dupes much more than a living antiwar vet, which was the truly glorious place where Pat Tillman, hero, was headed. -- Barry Crimmins