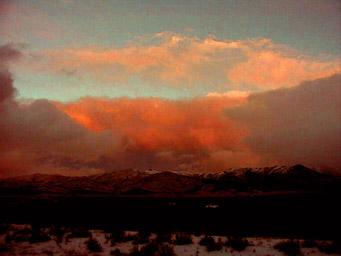 Today your leading authority on everything , me, has compiled a list of priorities essential to the survival of the United States... and a whole lot of other places. These are my demands but I hope you consider making at least some of them yours. And I'd like to hear what you think. One thing is certain: we can't keep going on like this. It feels like sunset but I'm hoping it's dawn. Here goes:

We the People demand:

The immediate end to all extrajudicial wiretaps and surveillance on the American people.

The restoration of habeas corpus.

A renunciation of the concept of "the unitary executive."

The end of outsourced beyond-the-law military contractors. If you are representing the United States in a military action, you are accountable to the military code of conduct.

The end of privatized service suppliers for our military. Limit war profiteering - reinvigorate the Quartermaster Corps.

No torture. Ever. Period.

Strict adherence to the principle that the only way to combat terrorism is with justice. To subscribe to this principle is to hold oneself to its standard. Therefore the United States will join the International Court Of Justice and behave in a fashion consistent with its goals and standards. Further, it will abide by its rulings.

A pledge to our men and women in the National Guard that their first and only duty is to guard this nation, from within its borders.

Our public servants rule with reason and not fear.

An immediate withdrawal of US troops from Iraq.

An immediate withdrawal of US troops from Afghanistan. Anyone who calls the conflict in Afghanistan "the good war" is historically illiterate.

A foreign policy that is based first and principally on diplomacy.

A foreign policy that is based on reality and not myth. This requires a realistic assessment of how our nation is viewed by the rest of the world rather than through the prism of jingoistic rhetoric that will not allow for the possibility that this country has made mistakes and done harm to innocents.

A government for the common good and not the private interest. This means campaign finance reform. This also means a public record of all interactions between elected officials, their staffs and private interests.

Polling place reforms that include safeguards against election day skullduggery and leave verifiable paper trails that lead from the voters' ballots to the candidates they choose.

That we start with ourselves by demonstrating our true desire for the betterment of humanity by eschewing gross consumerism and embracing humanist activism.

A return of the public airwaves to the public. This means a renewed fairness doctrine; the breaking up of media monopolies and the return of broadcast and print media to the control of residents of the communities they allegedly serve.

An immediate end to our longest failed war-- the war on drugs. You'd have to be on drugs to think it has done anything but harm.

The release of all nonviolent drug offenders -- if necessary into treatment, which is much more effective than punitive incarceration.

The legalization of marijuana.

Withdrawal from so-called "free trade" treaties. The only thing these instruments have ever liberated is capital and greed. They have done irreparable harm to our nation's industrial base and its mom and pop merchants. They have done even more harm to the international victims of globalization.

National socialized healthcare. Screw knee-jerk McCarthyistic fear of the "s" word. We all chip in to make sure we can kill anyone, anywhere in the world. It's time to denounce that socialism. It's time to greatly reduce the inordinate human and fiscal waste necessitated by the military industrial complex. The money we save could easily provide more than enough to provide the human right of sound medical care. So it's single payer. Clear enough? And the word 'insurance' is hereby banned from all medical facilities. If someone is sick and treatment's available -- and the patient wants it -- that patient receives the treatment. Period.

A wide scale review of farming practices with a particular look at the dangers of factory farming; bioengineered crops; overuse of pesticides; wasteful and inefficient use of natural resources -- in particular, water and growth hormone and antibiotic dosing of livestock.

That all sentient beings be treated in a humane fashion.

An immediate and urgent reassessment of our energy consumption resulting in a new nationwide mass transit system; steeply increased fuel efficiency standards and an emphasis on real alternative fuels, not just alternative ways for energy Goliaths to continue to corner the market.

A reinvigoration of our educational system with an emphasis on encouraging curiosity in young students. Curiosity is aptitude. Aptitude results in happy and productive lives.

Free college education for any student who maintains passing grades.

A renewed deal for art in this country -- spearheaded by federal funding for the reclamation of abandoned industrial and commercial spaces for use as arts centers. Where there is art there is hope, a commodity in shorter and shorter supply in too many American communities.

The passage of the Equal Rights Amendment once and for all. A commitment to the world's most overdue human rights initiative: children's rights and safety.

Renewed adherence to the principle of the separation of church and state.

The legalization of marriage between consenting adults.

A commission to study and make recommendations to reduce the ravages of poverty upon those most vulnerable to its cruel ramifications: children and the elderly.

An immediate, sincere and effective effort to rebuild New Orleans and the Gulf coast. Two years later and people are still suffering. Unacceptable.

Renewed protection and rights for workers, including swift and severe penalties on any employer that impedes union organizing.

An end to the xenophobic harrying of so-called illegal aliens. These people are often fleeing the horrors of our own foreign policy.

Federally mandated vacations for workers. We work to live not live to work.

The construction of the necessary infrastructure to make free high-speed internet access available where it's most needed: poor urban neighborhoods and remote rural locations. Internet access is crucial to students and businesses. It will bring employment to people otherwise unable to reach workplaces.

Computer recycling centers be set up so that old machines can be restored and made available to underprivileged Americans.. These centers can also serve as training facilities for aspiring tech workers. This will also reduce toxic waste.

Net neutrality because it is essential to the democratic exchange of ideas.

Tax fairness-- make the ultra-wealthy and ultra-profitable contribute to more than the campaign chests of the fixers they send to Washington.

Further, we pledge to refuse to allow others the license to impose artificial boundaries upon us. No more self-service dividing and conquering. These issues matter to all of us, regardless of background our geographic location.

This is just a start -- which is preferable to the grisly demise we'll face if we don't make critical reforms.