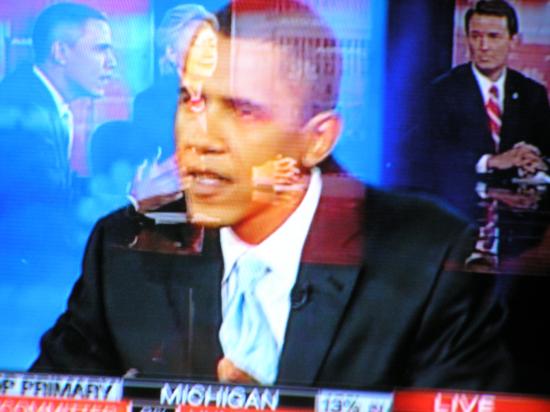 There is more bullshit than I can shake a fist at today.

I'll start by flailing at Barack Obama's fawning accolades for Ronald Reagan. If this is hope, make mine despair.

Her doubts about Obama are nothing new and can be found throughout her current and archived remarks on
the Black Agenda Report.

Sorry to interrupt the triumphant Obama narrative but  are those Culinary Union workers making those beds in Vegas Contras?

Speaking to the editorial board off The Reno Gazette-Journal, Obama praised Reagan as just what this country needed after "the excesses of the 60's and 70's".  Which excesses? The Civil Rights Movement? The Peace Movement? Environmentalism? If that's what psychedelic drugs did to people (and drug McCarthyism is always sewn into denunciations of that era), send a phone book of blotter acid to Congress.

I got into a bit of an exchange on The Field about this. This prompted me to write the following (actually what is there has more typos and doesn't include the word 'undercover') --anyway:

I have the big picture. I'm supposed to shut up and fall in line behind the latest, greatest pitchman for the myth for American exceptionalism. Ronald Reagan bullshitted this country by pretending to be on its side before screwing it over. Those with an actual working knowledge of the man's background were not surprised. He did the same thing to his brothers and sisters in the  Screen Actors Guild when he was an undercover toady for thug studio bosses, as well as Hoover and McCarthy (while serving as the president of the guild.)

So what if Obama is only bowing to the myth of Ronald Reagan? It doesn't change the fact that Reagan was a horrible president who did an awful lot of damage to innocents at home and abroad. As he did this, we were told again and again how he made us "feel better about ourselves." How? By living lives unencumbered by conscience?

Obama made his calculation by bringing Reagan into this. No one asked him to so much as mention the scrotum-necked ghoul. He made a decision to play to the dopes and perhaps he will benefit from it. But he will lose some historically literate people in the process. I'm sure that's a statistically insignificant slice of the American demographic pie so I guess he's pretty shrewd.

But this isn't about the past, it's about the future, right? A future where hope lives among other comforting bromides. Unfortunately, I have a word in my head that won't let me forget about Ronald Reagan or what he did in Central America. That word is ¡Presente! It's what people say in honor of those martyred by US funded and directed brutality. It's how you say "we must never forget" in Central America. I have not forgotten and so when Reagan's name is mentioned, my demeanor curdles.

And none of this criticism in any way buys into the 'either/or' argument that implies a knock on Obama is an endorsement of the odious Clinton.

At least John Edwards pulled his campaign bus through this yawning gap in Obama's argument that he's a man of the people.

And word has it that even Clinton is now attacking Obama from the left(!!!) in last minute ads in Nevada.

Bill Clinton spurned suggestion that his wife's campaign wasn't behind the lawsuit meant to keep chambermaids from supporting other candidates in the Nevada Democratic Caucus. Then he extolled the virtues of the lawsuit (that a judge later dismissed). Well, Mr. Once and Future Resident of 1600 Pennsylvania Avenue, if the lawsuit was so damned virtuous then why wasn't your wife behind it ? And upfront about it?

And you can take that to the bunk!

Mitt Romney keeps telling us that he won't arrive in Washington owing any favors. Unless of course you count that one small marker he left in Michigan that's supposedly good for the redemption of the American auto industry.

Lucky for Romney that his Mittiot supporters don't pay attention to Democracy Now. Listeners to that program understand that his promises to create employment in the USA don't really hold a lot of water -- especially considering how many jobs he sent offshore (or simply eliminated) in his days with Bain Capital. And I know 'Bain' is misspelled.

No one can buy Nitmit - he was bought and paid for long ago.

Well we've finally learned the secret of the surge's vaunted 'success' in reducing violence in Iraq. Bombing. Who would've guessed! It turns out that he United States made four times as many air strikes on Iraq in 2007 as it did in 2006.

So violence is dropping in Iraq. It's dropping from from planes. I'm sure the humble denizens of the US command in Iraq feel their own air attacks are unworthy of mention when compiling statistics on violence in that occupied land, but they really should remove the basket from their firebomb.

At least Bush's long-term strategy has emerged: it now seems his plan was to let the situation become intolerable on the streets so as to influence people to simply hunker down in their homes. Once the streets had been emptied, bomb the homes. It also kept our own troops safe since not even the logisticians of this calamity are stupid enough to send our grunts into areas getting strafed by our fly-boys (at least not that often).  So they add up  the violence, subtract the air assaults and then claim that things are somehow safer in Iraq. Kudos to DOD strategists! And boy, can that General Patraeus keep a secret. Not once did he mention the merits of the 'kill anything that moves' pacification policy.

Of course this isn't sold as a 'kill anything that moves' policy. It's sold as a dividend of improved and more precise smart bomb technology. And if you believe that, you're probably still waiting for them to find the WMD's.

The media certainly kept nice and mum about this, too. You'd like to think someone would have pointed a camera in the general direction of skies suddenly darkened by an air traffic jam of war planes.

So much for the collected letters of Jimmy Jeff Gannon Guckert

So 457 days of White House email was erased. How do we know this? The White House's own investigation has determined that it had been done as a matter of routine computer maintenance. Goodness knows that folks who have no problem at all spending billions of our grandchildren's money In Iraq, have to cut back somewhere. The email that was erased could have easily fit on a $70 external hard driveand $70 is $70. Ah, fiscal responsibility!

Credit card records of the true believers at the White House establish that they did have email back in those days. How else would they have known where to order all those, um, manhood enlargers?

Economically, the board is waxed, the incline is steep and conditions are ideal for a precipitous plummet. Suddenly the economy is a story because there just aren't enough people left to fuck over to fuel a continued stock market expansion. Recession is reality and the fixers can't fix it.  Ben Bernanke has appeared before Congress and promised to go down to the crossroads to try to flag a ride. This means he'll wave wildly when China drives by and yell, " Hey  pal ! Ya  got any cables ?

Speaking of plunging.... did you read the piece in the NYT the other day t Americans are as likely to drown in a toilet as get killed in a terrorist attack? It must have really annoyed Bush that the story ran in the science section.

The White House will respond by announcing a toilet level threat color code.  Word has it that brown is the most dangerous level on the chart.

The administration may bring in Sen. Larry Craig to tap his expertise concerning restroom codes. Lord knows he'd make a helluva role model for the program. "Hi, I'm Larry Craig. Despite the dangers all Americans must confront in these days of the porcelain menace, we must continue to live our secret lives."

This weekend we will have survived seven years of Bush and Cheney. Seven years and it looks like we won't get a single day off for compliant behavior. On the upside, a year from now Bush will be packing to leave. On the downside, someone will replace him.