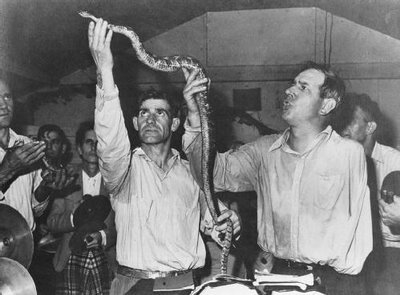 Today marks the beginning of the final year of the cruel and unusual punishment that is the Bush- Cheney administration. I'll skip a review of the past seven years in hopes of sparing the colicky. Let's instead look to the glimmering future when (barring a miracle or worse, Michael Bloomberg) one of a rather narrow field of candidates will take the oath of office and become the second unitary executive in American history.

I'm trying to contain my excitement.

Perhaps the next president will be Republican Mitt "The Happy Panderer"  Romney, a deserving choice to be handed the economic bag of rat shit left behind by Dubyaho. There'd be something reassuringly retro about watching Romney business of America is business this country into a fiscal death spiral. The only question is: would the total collapse come before or after he can get those Studebaker assembly lines rolling again in Detroit?

Sticking with the Republicans (now there's a sickening turn of a phrase), perhaps our next maximum ruler will be flaky old John McCain-- the perfect choice for Americans searching for a father figure -- albeit  a deluded, often bitter father figure. McCain's trying to finally win in Vietnam by refusing to face reality in Iraq.  So if we want to tread a middle of the road paved with IED's, he's our man. McCain is considered moderate because of his temperate opposition to torture. He could be the prez a year from today, providing of course he doesn't blow a ventricle in his noble old heart racing his fellow Reptilians to the bottom of the pit that is social conservatism. That pit is the rightful domain of one Mike Huckabee, the smiling bigot who wants to deface our nation's most secularly sacred document with language expressly denying inalienable rights to a lot of men and women. Perhaps he'll somehow win this thing and become the first president to take the oath of office with one hand on a bible while the other handles a viper. And no one will forget an inaugural address given in tongues.

Perhaps by the time you read this, Fred Thompson, the droopy would-be savior of the Republican Party, will have withdrawn from the race. If he does, he will leave a large void behind, which would be appropriate since a large void was all he brought in the first place.

Duncan Hunter did pull out of he Republican race yesterday and he will not be forgotten or remembered because the only people who noticed the California crackpot were the Secret Service agents assigned to the various debates. "Suspect is NOW WALKING ON THE STAGE!"

The Gluttonous Old Party's other alleged centrist candidate, at least rumored to be in this race, is former Supreme Ruler Of New York City, Rudolph Giuliani - Dada. Giuliani oversaw the ethnic cleansing of the Big Apple and also presided over the extremist makeover of a once iconic city into a shiny mall/Disney theme park. Now when the upstaters who got rich building prisons to house all the black victims of  Rudy-roundups come to town, it seems familiar and inviting to them.

Either Giuliani is waiting for the heat to blow over concerning numerous scandals that his felonious police commissioner, Bernard Kerik, somehow neglected or Rudy is protesting the unfairness of his party's decision to hold all its primaries and caucuses on days other than September 11. If he manages to duck criminal culpability and his arrogant avoidance of the first several campaign battlegrounds doesn't do him in, it's even money that he attends his inauguration dressed as Eva Braun. This leaves us no choice but to turn to the Democrats. The term 'sinking feeling' comes to mind.  Since I have written more extensively about the D contest than the R race, I will keep this part of today's consideration short and unsweetened.

Barack Obama's decision to wait until he got to Nevada, and its large Latino populace, to unveil any sort of appreciation for Ronald Reagan was at best, massively idiotic.Hey you know the guy who funded the death squads that drove you from your native land so that you had to come here and clean up after fat Americans too drunk to hit the toilet? Well he did have his redemptive side. Now vote for me. ¡Viva Hillary!

Hillary Clinton and her surrogate husband have done everything this side of calling for the decriminalization of lynching and then suggested Obama has gone to the race card. Way to solidify the Dem Base!

John Edwards didn't defend the right of more marginal candidates to participate in Democratic debates. Now he's got the role of  marginal Dem candidate all to himself.

Unless, in an attempt to minimize the deleterious climactic effect of heated debate at a deadlocked convention, Al Gore accepts the nomination, the Dem nominee will be Clinton or Obama. Many of us have already gone through the uniquely American process of glorifying one or the other of these venally ambitious people (or worse, one of the R's).

I can't do that because I understand a basic truth: he or she who wants to be in control is a dick and probably crazy. The premise behind most presidential bids is shockingly simple: I've looked at the entire world and there is one glaring problem-- I'm not in charge!

Let us form a committee and worship you, oh great and infallible one.

Ridiculous as that sounds -- that's exactly what many people do. Then they try to influence the rest of us to fall in line behind a stump-speaking blowhard possessed of not even a hint of lactose intolerance to the green mother's milk of politics. And if we question or challenge their American Idol, we risk the swift-boating of our own common decency.

The thing is, emotionally and intellectually mature people should have a healthy distrust for those who want to be in charge. They seek to rule us. I don't know about you but I do not seek to be ruled. Would-be leaders aren't strong so much as they are shameless and needy. Usually they are just self-loathing, hypocritical weaklings who feel that the extra authority and special privilege of high office will somehow camouflage their massive character flaws.

So as much as I will take great joy in watching W(easel) leave town a year from today, I assume that on that day, as on this, most Americans will be more excited by the prospects of the NFL playoffs than by the prospects of a new megalomaniac extolling the virtues of their particular brand of leadership. Enjoy the games.