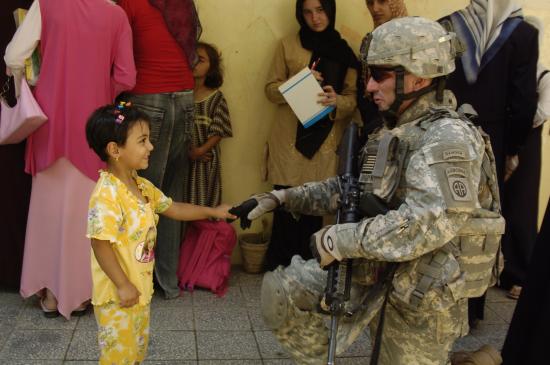 Above: Check out the kid and people in the background.

Below: This photo is mild compared to what's out there. Google "Iraq child war victims" and see for yourself. 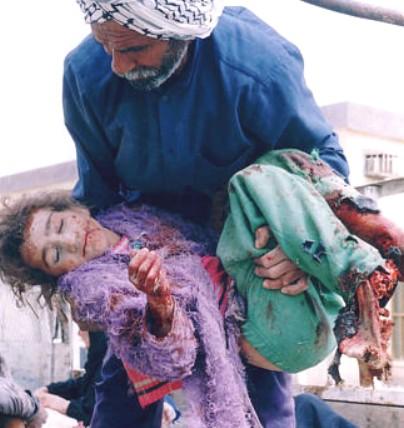 Tuesday afternoon, as soon as CNN teased an upcoming guest as someone who had done a book of photographs of Iraq featuring part of the story that we don't often see, I knew what was coming. I girded myself for a latter day version of GI's handing out Hershey Bars to kids.

I have nothing against soldiers being kind to children. Grunts are people and people who get near kids, soften. Kids in a war zone are vulnerable, lovable and needy. Most anyone who would see a child in such dangerous surroundings would feel great empathy for the youngster. A kind gesture towards such a child should almost be reflexive. This is particularly true when you consider how most soldiers were kids not so long ago.

So I was leery of this story even before Tim Clemente,the editor of Courage- Iraq: A pictorial essay of life in Iraq today,  joined CNN's T.J. Holmes for what was more infomercial than interview. Holmes began by submissively urinating on himself and all journalists by heavily leaning on the myth of how 'we never see the good side of the Iraq war/occupation.' He also disclosed that Clemente isn't just any good Samaritan, he's a retired FBI agent who while in working as a 'counter-insurgency' expert in Iraq suddenly got the idea to do this book. Call me a cynic but It's unlikely that Clemente, a weasely looking guy with a buzz cut and matinee idol mustache, did this book in his spare time. No, this was Grade A government business.

Holmes fawning interview looked hard-hitting compared to the one I found on You Tube that was conducted on FOX.


The scientific conclusion Clemente shares about how Iraqis feel towards their occupiers?  "....the vast majority of the Iraqi people more than accept their presence, they welcome them." Gosh, it sounds like those counter-insurgency experts are doing a hell of a job over there!

Clemente picked out 300 photos from thousands and thousands, all taken by official US military shutterbugs, to create a piece of propaganda intended to fight the domestic insurgency that has swollen against this war. Predictably the book's intent is hidden behind phony compassion for 'our troops.' The book's profits are promised to a few organizations that help wounded vets and their families. Perhaps if we weren't spending so much money having former FBI agents who now work as "counter-insurgency"experts edit photos taken by the US military, we wouldn't need to slough off this obligation to private charities.

The photos Clemente excised for the interviews mostly feature  kids interacting with GI's in shots that at times look like they were staged by the same art designers who ginned up the legendary 'Mission Accomplished' shoot of '03. That said, I'm sure many of the photos were completely organic. To repeat, I believe that soldiers are nice to kids. And most kids are smart enough not to sass armed intruders. Clemente was there to put the war in a good light and you can bet he knew just when and where to avail himself of the best possible illumination -- particularly when he had every photo US military photographers have shot for four years to work with. (By the way, the book includes shots that don't feature kids but Clemente's PR focus was on troop-adoring kids,)

And contrary to the implied need for this publication, such photos aren't at all rare. Not in this country, anyway. We regularly see this same story but Clemente's premise is that we don't, and who wants to risk getting called a kid and troop-hater to challenge such an authoritative assertion? (Besides me.)

Clemente obviously weeded out photos of children  with whom our soldiers have connected in a much more impersonal fashion. We don't see the kids killed in the increased air raids that have been used to pacify-through-violence so as to make the 'surge' appear successful. Nor do we see the kids splattered by mortar rounds, chopped down by gunships and maimed by IED's and other explosives that would have never been anywhere near their neighborhoods had George W. Bush not lied our way into war. And there is just no estimating the lifelong psychological damage done to Iraq's kids. We do know that of 4.8 million children in Iraq.


This book's message is simple, it says: Look at how great America is! Even though these people have had the nerve to defend their own land against our foreign invasion, our GI's are nice to children and quislings. There has never been such a generous and decent country as the United States!

Yeah, we're so fucking decent we have to subsidize the cost of care for our wounded vets with the profits from propaganda meant to glorify war those vets never should have been involved in in the first place. Our untruth is marching on!

Sewn into all this is the implication that journalists have intentionally spun this made-in-the-USA calamity into something ::gasp:: negative. Imagine journalists being negative about a war that's killed more members of the Fourth Estate than any other in history! Talk about being unable to put aside your own petty agenda!

Plenty of journalists have documented all sorts of stories in Iraq Americans never see. Our unawareness is due to producers and editors who don't think it would be appropriate to print or broadcast photographs of children that, uh, children could see. These same editors happily give Tim Clemente plenty of air-time and column inches. And so the story that's really avoided is the one that tells the true tale of the violence that bullshit artists like Tim Clemente are out to cover up with bogus photo-ops and fairy tales about American altruism.

There aren't enough Hershey Bars in the world to make up for what the United States has done to the children of Iraq. Had we any Courage-USA, we'd face up to that grisly truth and get our violence provoking and propagating troops out of a nation whose children have suffered more in a few years than anyone should in ten lifetimes.