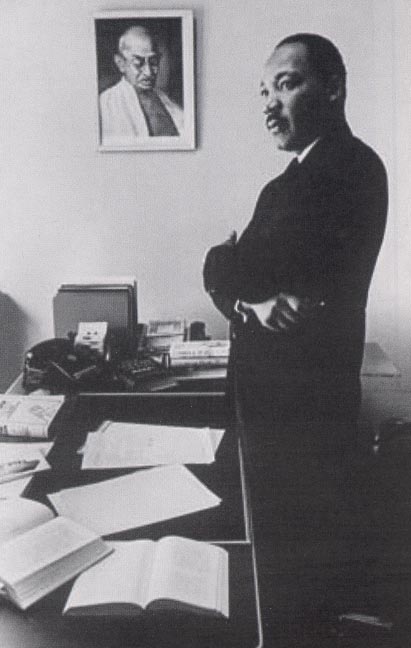 This morning, in its Martin Luther King Day edition, the New York Times printed the following sentence, penned by Jeff Zeleny :
Barack Obama faces a new test in South Carolina, where he has to draw significant support from African-Americans
while maintaining the appeal of a candidate who seeks to transcend race.

Lucky for the Times, MLK can't arise from his grave to confront this country's newspaper of record about its inability to transcend racism. Obviously ethnicity is a coincidence of birth and therefore nothing to rise above. As has been pointed out again and again, no one is talking about white candidates 'transcending' their backgrounds. (Romney's Mormonism gets mentioned but the stories imply that it's the voters' problem and not his, even though his church's hideously racist teachings of just a few decades back are not likely to have been 'transcended' by any number of its members).

It would be better if the Times just flipped over all the cards and wrote: As much as it would behoove him to run from his Negro heritage, Barack Obama needs the darkie vote and so must try to get it without offending  Mr. Charlie.

No doubt Obama is surrounded by advisers urging him to soft-peddle his ethnicity. His cynical senior staffers know it's not politically expedient for Obama to be black. They know it would be suicidal for him to be 'too black.' Despite all the flowery rhetoric that is blathered every year at this time, the USA is about as inclusive as a dinner party a Dick Cheney's house. America is as maddeningly stupid as a xenophobic land of immigrants can be. And that's pretty fucking stupid. We pride ourselves in never considering so-called 'amnesty' for people who see no choice but to come here 'illegally' to escape malicious economic and political consequences of policies designed to amplify advantage for the advantaged. Follow the bloody footprints and those policies will lead you right to Washington.

Soulessly shrewd politicos endorse amnesty only when it blankets the human rights offense of systematic deprivation and degradation of those easily isolated for mistreatment because of their skin color and/or language. But amnesty to those forced by circumstance to our land? Hell no!  At least this is consistent: why amnesty for 'illegals' when we have yet to furnish meaningfully full citizenship to the heirs of those who were brought here in chains to build a prosperous society for the human jackals who enslaved them?

Barack Obama gave a speech yesterday at MLK's Ebenezer Baptist Church in Atlanta, and it was a good one. That said, I take issue with a key sentence of that speech. The senator spoke of Dr. King's conflict with the American economy by saying, "He led by challenging our economic structures, understanding that it would cause discomfort." Had Barack Obama been bold enough to speak unvarnished truth to power, he'd have said:"He led by challenging our economic structures, understanding that THEY cause discomfort." That one sentence would have moved a good speech to the boderline of great.

Amnesty is a noble thing once crimes are exposed, and their full ramifications have been studied and fathomed, and every effort has been made to make amends to injured parties. Meeting those preconditions, amnesty is an act of decency, generosity and healing. When it's employed to excuse atrocities that have gone unnamed, un-investigated and unanswered, it is a far less noble thing. But then, unnamed crimes need no excuse because they're already shielded from justice behind walls of silence and denial. The pursuit of human rights, even when it requires the unsanctioned crossing  of man-made borders, is not a criminal activity.

In the 19th Century, slaves headed north to freedom. In the 21st century, when only trade is free, de facto slaves also head north in hopes of a better life. When the downtrodden commit such affronts against the laws of unjust societies, such acts are the result of desperation and exasperation. I don't happen to believe we should be coming down hard on people for being in the wrong place at the wrong time -- such as the USA in the age of Lou Dobbs.

Early in my very lifetime, in this very country, it was, for all intents and purposes, a worse and far more punishable crime for a black man to look 'the wrong way" at a white woman than it was for a bunch of yahoos to lynch that black man for that 'crime.' To 'look the wrong way' at someone was considered a serious affront because it meant that a black man 'didn't know his place.' And there was no possible excuse for that. Not when white society bent over backwards to make it clear just where that place was. Down south that place was nowhere near areas marked 'Whites only.' Throughout the nation, racial boundaries were marked indelibly in economic paint. The whites lived in the black and the blacks lived in the red. Black neighborhoods had the lousy schools, substandard housing, and scarce opportunities. All along ignorance, an unavoidable byproduct of reprehensible conditions, was used as proof that poor people (and especially minorities) deserved nothing more than further agony.


Thanks to Dr. King and the civil rights movement, there have been some gains concerning desegregation and workplace equity but not nearly enough. In a way, white politicians have used the assassination of MLK as an alibi for glacially slow progress on the issues he gave his life fighting for. The pols throw up their arms and say, "if only Martin were here, we'd have a black leader we can work with."

Current white leaders aren't exactly transcending the low, unspoken and ancient coda that demands wariness of any black person who doesn't know his or her 'place'. Bill Clinton's recent custom of performing primary /caucus eve verbal character assassinations of Sen, Obama is anything but a story of transcendence. But no worries, it's not like the New York Times feels Mr. Clinton needs to rise above anything.