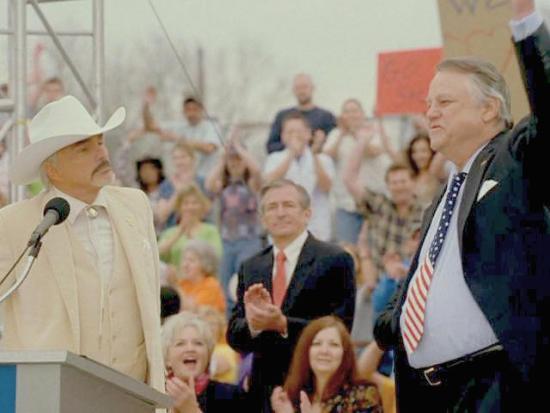 I'm still fighting the trick birthday candle flu and wasn't going to post... until  news broke of Fred Thompson's dramatic withdrawal from the race for the Republican presidential nomination.

As it happens, Thompson stopped running last year but forgot to tell anyone. Once he realized people were going to the trouble of including his name on ballots and continuing to cover and analyze his campaign, the courteous Thompson made it official by announcing the end had come. His delayed announcement is generally viewed as harmless, especially since no one went so far as supporting the former senator's presidential bid.

There had been speculation that Thompson's run was nothing more than a premise for a reality series about an insincere candidate who never had any intention of following through with his candidacy. Unfortunately, Rudy Giuliani beat them to the punch.

This comes as bad news to Joe Don Baker, who now faces the very real possibility that Thompson could assume the role of Gov. Jim Applewhite in the rumored Dukes of Hazzard II -- The Curse of Uncle Dad. It had been assumed that Baker would reprise the role he played in the 2005 cinematic classic should Hollywood attempt to follow up the masterpiece.

For now, Thompson is back in Tennessee, polishing his trophy wife.