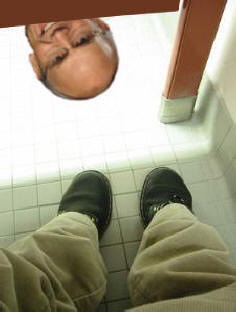 Like any abusive adult, War President Bush waited until he got in private to throttle defenseless children.

Nothing like a private veto to show contempt for public health.

Yesterday he told reporters that what he has authorized for use in interrogations is not torture. But then Bush doesn't think what he does to the English language is torture, either.

Say this much for the man, he has a very high threshold for other people's pain.

New Mexico Republican Senator Pete Domenici will not be seeking reelection to the senate because he has a progressive form of dementia. I'm no doctor but  I'd have guessed it was reactionary dementia.

Despite all his tap dancing, Idaho Senator Larry Craig's guilty plea in his men's room solicitation case has been upheld by a Minnesota court. It's probably best because now Larry can devote all his energy to denying that he ever promised to resign from office.

Larry Craig's reversal of his decision to leave the Senate, along with his attempt to withdraw his guilty plea proves he does go both ways. This may be a good sign that he's begun the the long trek back from the satanic grip of homosexuality. Godspeed Larry Craig!

Actually Craig is  a legend in men's rooms throughout Washington for his masterful use of the satanic grip.

He's also known for his expertise with the heathen clutch.

And his valley of damnation is second to none.

That guy can exorcise the chrome off a trailer hitch!

Everyone is pretty excited about bringing down athletes who use performance enhancing drugs. How about corporate executives who take Prozac so as to be numb to any feelings of humanity they may feel about ruining workers lives -- whether  laying them off in the United States or hiring them as virtual slaves in foreign lands?

Remember all the talk about if "you broke it, you bought it" concerning Iraq as Bush was about to order his dunderheaded invasion? Well my pal Jim Infantino has a good addendum to that maxim and it goes out to the Democrats. If you pay for it, you also bought it! And they've paid for it again and again by authorizing the funds necessary to keep an unnecessary war and occupation raging.

So I caught ten minutes of a rerun of an Anderson Cooper special about gangs in a Los Angeles barrio. Cooper was nowhere to be seen, just narrating -- although I imagine he was wearing a helmet and flak jacket in the studio.

Anyway, two white cops stop a Latino kid, take him down and search him. They find a piece of paper covered with doodles. They ask the kid if he's in a gang. The kid says no. They say, "you are now! Why? Because they decided the piece of paper had gang related art on it. So now the kid is in an electronic register of over 200,000 "gang members." This means that the police never again have to show probable cause to search this teenager (as if they did in the first place). So based on the judgment of a white cop in a Latino neighborhood, this kid's now even easier prey for the police. This is where we're at in this country. We have a White House that ignores all the other branches of government and does exactly as it pleases. We have cops who can stop a kid on the street and label that kid as fair game for the baddest gang in town-- the the LAPD. From that point on if the Man catches the boy with a reefer or a pocket knife, its straight to jail. Even wearing baggies can result in being charged with gang-related activity. Hmm, when are they going to bust Levi-Strauss for supplying this contraband?

200,000 gang members in LA? Even after Aqeela Sherrills and Jim Brown did Nobel Prize-neglected work to bring the 1992 peace treaty between the Crips and Bloods? Maybe the powers that be don't want peace. Maybe they know that Aqeela speaks the truth when he says Peace is way more difficult than war Maybe they know peace is far less profitable for weapons manufacturers, not to mention the police-industrial state. Maybe they're fearful when they see