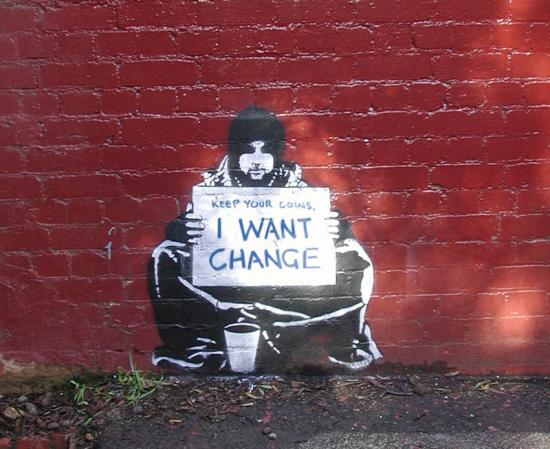 OK that's it. I can't handle the pressure of mailing list stuff. After a few years, I finally sent a message to my list today and some people received three copies. Why? Beats me! I'd send out an apology but fear it would also arrive in triplicate. If you can handle RSS feeds there are about a million ways to sign up for updates on site activity. ::Psst:: They're over on the right column of the main page.

Anyway, the reason I sent the e-mail was because I have initiated my fall site plugathon. I don't want  money. There are no matching funds involved. The only premium you'll receive  will be more quips and essays and they'll be there whether you help or not. It's just that after four months of serious work to get this site hopping again, it's time to make a more public push for traffic. Without any sort of promotion, visits are up by a factor of ten since June. It's clear people are already spreading the word. If you haven't yet sent my links to friends and blogs and link roundup sites, I hope you will. My web traffic will grow only as a result of "word of keyboard. " And that word must be typed by you. People trust you but to them I'm just some self-promoting jerk. So you are the best advertising I can get. Thanks in advance for helping.

A few comments form late on a Sunday....

The BBC has found Condoleezza Rice! She was spotted in the former Soviet Union according to a story in which Rice asserts, "I think that there is too much concentration of power in the Kremlin. Everybody has doubts about the full independence of the judiciary."

She added: "I am quite confident that your goal is to build institutions that are indigenous to Russia... but that are also respectful of what we all know to be universal values."

Those values included "the rights of individuals to liberty..., the right to assembly, the right to not have to deal with the arbitrary power of the state", Ms Rice said.

Notice she had to travel to Russia to say that stuff because if she made those comments on an international call, her next foreign junket would have been an extraordinary rendition.

CONDI RUMORED TO BE ON SURPRISE MISSION TO EGYPT

You know what humanizes Rice, who by comparison makes automatons seem emotional ? Everyone refers to her as "Condi." You know why? Because no one can spell "Condoleezza." Except Condoleezza and she isn't human.

Does anyone believe Bush can spell her name?

"Freedom is about authority.-- Giuliani, NY Times 3/17/94 (from the always valuable Progressive Review)

So we're free to comply with Giuliani's edicts or end up in a gulag somewhere.

Gosh I wonder why his kids want nothing to do with him? Freedom is about authority? You know you're a real jerk, Dad.

It kills me that this guy continually causes amazement among mainstream pundits for doing so well in Republican polls because the pundits think he's such a "moderate."

What makes him moderate? The fact that he only believes in the ethnic cleansing of people of color?

Another alleged Republican moderate, Congressman Peter King of Long Island is a national security adviser to Giuliani. Check this moderate remark:Unfortunately we have too many mosques in this country, there's too many people who are sympathetic to radical Islam. We should be looking at them more carefully, we should be finding out how we can infiltrate, we should be much more aggressive in law enforcement."

If that's what the moderates are saying, I shudder to estimate what the reactionaries are advocating but my guess is that it involves the Air Force.

Giuliani defended King and said he wouldn't drop him from the campaign. "I've known Pete for 41 years, so I'm not about to do that," Giuliani said. "I know exactly what Pete meant. I knew before I even heard the clarification. What he means was that there are mosques in which violence is preached. I know that from my own investigations of Islamic terrorism. I also know that there are many mosques in which it isn't."

I guess the fact that he makes the allowance that there are some mosques that aren't advocating violence is what makes Rudy so moderate.

Rudy always is quick with the benefit of the doubt-- so long as you're a connected white person.

I bet he'll tell us that he knew that Bernard Kerik didn't mean to commit any felonies either. "I knew the minute they unsealed the indictments against my former police commissioner..."

And how about all the Christian churches that stampede this country toward one violent act after the next? And the wonderful Christians who advocate beating children and the subjugation of women? Who is infiltrating those religious facilities? Who is saying there are too many of them? Not Rudy Giuliani -- he's too moderate for that.