Weekend Special: Dick Cheney will be remembered as a political genius Saturday, October 13, 2007 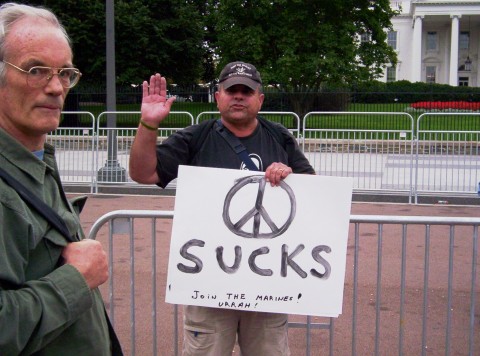 Back in the day, Dick Cheney dodged the draft and George W. Bush ducked duty while he was supposedly serving in the National Guard. Why? Because they were patriots. Why wouldn't patriots want to join or serve the military during time of war? Well why don't you ask that question of retired Lt. General Ricardo S. Sanchez and others of his ilk?

But before we get to Sanchez, we must consider what Hollywood calls the "back story." Fade to sepia....

Young masters Cheney and Bush dearly loved war since their earliest days. As whelps they delighted in celluloid paeans to a time when war was a simpler and more joyful thing. Their world view was shaped by films that captured this more innocent and yes, happier America. An America that responded to Hitler, Mussolini and Tojo by singing, dancing, race-baiting and marching in place in front of a Stars and Stripes that was a- flappin' in a wind machine-enhanced atmosphere. Projecting themselves into a silver-screened future, Little Dick and Junior George dared to dream of growing up and costarring in their own war. Ah, the idealism of youth! Well sometimes dreams do come true and as if choreographed by Busby Berkeley himself, their chance came early... or did it?

As young men, Dick-o and Dubyahoo had a crack at war in Vietnam. The conflict had the elements to be a classic cinematic conflagration: an enemy that was easily discredited upon ethnic grounds and a need for millions of young Americans to travel halfway around the world to fight to perpetuate our greatest freedom of all -- the freedom to attack anyone we felt like attacking!

Starry-eyed and full of nationalistic fervor, Cheney and Bush champed at the bit to join the combat in Southeast Asia. Sadly, before they got their chance, soldiers returned home with negative messages about the war. Just like that, the traditional American support structure for wars began to unravel. Almost nobody this side of Staff Sergeant Barry Sadler and his moving Ballad of the Green Berets (a reverential tribute to fighting men who jump and die") made any pro-war music. Most certainly nobody was making any pro-war musicals. Crazy as it sounds, not even Jesus Christ - Superstar was a hawk back then. And to think this was all because some soldiers had come home and felt they had a "duty" to smear the resplendent beauty of a protracted conflict with stories of massacred children and the loss of comrades in what they arbitrarily decided was a morally unjustifiable clash.

The war soon became no place for its supporters. Dick, now a young man with a sexually ambiguous wife, saw the writing on the wall and rearranged it into draft deferment after draft deferment. He was not alone as countless other war lovers manipulated the system so that they would never have to go into combat with those who did not appreciate the honor inherent in an armed assault upon an impoverished people. It's impossible to estimate the number who'd have loved to have served, providing the only things visible on the home front were people tap dancing and waving the flag.

But instead of Barry Sadler, Bob Dylan's sinister song-smithing was distracting a nation's youth from its moral obligation to jump and die. Suddenly there was an epidemic of music that celebrated peace. In short order the biggest threat to our nation was no longer people attempting to bring in a rice harvest halfway across the world. But who would fight on this domestic front? People like Dick Cheney, that's who.He joined scores of courageous unsung heroes who stayed home to struggle for the soul of America. Unless Negroes were involved. None of that music, please! Some engaged the enemy in direct combat, making the case for blind obedience to the government to fellow students in unblinking op-ed pieces in college newspapers. I can remember one in particular written by my own former sister (we'll call her K) in the University of Miami student paper. It was titled "Spiro Agnew will be remembered as a political genius." She was not alone in exercising reactionary prescience; her views were held by a vocal vanguard more willing to break with the principles of their generation than the edicts of their government.

Others, who held the same views, did thankless clandestine work. These deep cover operatives grew Beatle haircuts, went on regular "pot trips," engaged in premarital sex with numerous partners and pretended to enjoy it, all while listening to the screeching, caterwauling rock music that drove good Americans like Guy Lombardo off the pop charts. Worst of all, they had to pretend they opposed the war and weren't pining for their shot at combat. Undaunted, they kept their mission in mind and vowed not to suffer through years of sex, drugs and rock and roll only to take over a world that resembled a figment of John Lennon's twisted imagination.

These gallant double agents were sustained by the knowledge that someday they would rebuild a pot-free and sexually repressed America full of people who only listen to music played by crewcut-coifed white men , sitting in rows and wearing red blazers. And so they laid low and waited for their chance. Slowly they broke with their fellow baby boomers and traded pot for Prozac, group sex for more discreet mens' room encounters and Jimi Hendrix for Kenny G. Along the way they supported war and violence at every turn, in Grenada (those medical students were dangerously close to graduation!), throughout Central America and of course in the Middle East. Soon it became a matter of finding the right leader....

Those who did the counterculture counterintelligence had it easy compared to young George Bush, who got caught in the worst possible place for a war supporter during Vietnam-- which is to say, in the military service. Dramatically foreshadowing his later life, Bush raised his hand and took an oath that he soon realized was not in his best interest to uphold. How could he risk going to Vietnam and sure exposure to Negative Nelly combat troops and yet maintain the cheery attitude towards war he'd developed at the picture shows of his youth? It wasn't possible and so Georgie gave up his chance at war so that someday he could provide that same opportunity to a generation yet unborn, and their children and their children and so on and so forth. Thusly the littlest scion made himself scarce, serving out a painful self-imposed quarantine from other active duty soldiers in a private hell in which he kept a lonely vigil. Then, out of modesty, he destroyed all records of this heroic and selfless period of his life. After that, like the rest of the pro-war baby boomers, he watched and waited for his chance.

Unlike the rest of this swarm of hawks, he would someday become the chosen one. The one who would again commit American troops to protracted combat missions in two separate nations. In Afghanistan there was at least a flimsy premise for military engagement. Iraq was a different story, a story George W. Bush kept from the American people as if it were his very own military record. And so today the martial state that Cheney and Bush have dedicated their lives to restore, hangs in the balance. You have to feel a similar moment was faced in ancient Carthage, when failure of its troops to hold true to the glory of gore betrayed its elite rulers' healthy appetite for societal dominance.

Which brings us back to Sanchez, who to his credit seemed a good enough man when attempting to soft peddle a so-called torture scandal early in GWII. But then he retired, returned stateside and did the same thing that the Vietnam Vet Judases did back when so many brave proponents of that war were so selflessly serving in the battle against peace. So Sanchez is back using his combat experience to betray the current war effort. He's called the Bush administrations handling of the war incompetent and said the result was a nightmare with no end in sight. And why are we supposed to believe Bush is so incompetent? Because he has never been in combat. And so our commander in chief, once again honor bound to maintain his silence about his Vietnam era exploits, must deal with a rogue military element that again threatens our nations core beliefs. If they succeed, our nation could soon be spending more on health care than munitions. Is that the America we want to leave our children? George W. Bush and Richard Cheney answer that question with a hearty SIR! NO SIR!

Someday someone will make a good old-fashioned musical that tells the true story of the sacrifices that Bush, Cheney and so many other courageous baby boomers made to kindle the waning flames of war until they again grew and consumed generations to come in the kind of glory that should make us all want to stand up and sing.