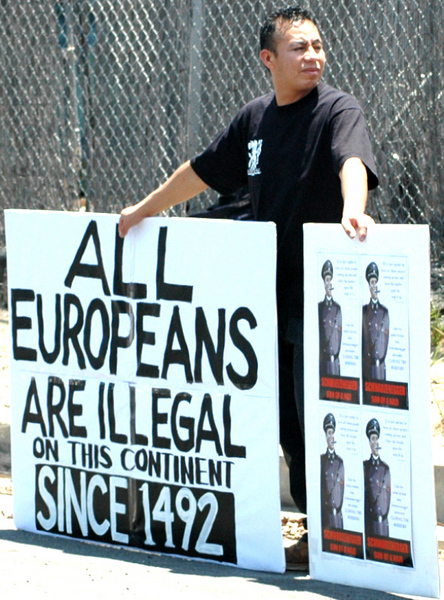 UnAmerican exhibiting message the do-nothing Congress should have banned years ago, right Lou?

CNN Xenophobe-in-Chief Lou Dobbs never uses the word "China" without first using the word "communist." It''s time (for the sake of accuracy) Lou added another qualifying term to the phrase. Only political illiterates (the Dobbs target audience) don't understand that the problems with China these days haveas much to do with capitalism as communism. So the properly pejorative term would be "Capitalist-Communist China." Last I checked, Chirman Mao wanted to bring down the West with ideology and not tainted dog food. But as time (and Mao) passed, East has met West and found that greed is the common language.

Greed's victims know no nationality. If you think only our kids and pets have had their health disregarded for the sake of a quick buck, what do you suppose is happening to Chinese workers? I'm pretty sure lead paint is more dangerous when it's wet and atomized than it is after it's dried on a Sesame Street building block.

It's reached the point where the Chinese Communist Party has opened a branch at a WalMart retail store in the northeastern Chinese city of Shenyang.Do you really think this ran contrary to the corporate principles of an outfit that looks upon the old British Empire as isolationist? Walmart makes its staff sing a stupid loyalty anthem every morning, It punishes its employees if they fraternize with one another on the job. The monied crackers who run the empire have done more to destroy Main St America than all the drug dealers,terrorists and (gasp) homosexuals that so threaten them ever could. Why  would such soulless money-grubbers have a problem partnering with an authoritarian state? China is a late stage capitalist's dream -- a profiteering police state with abundant virtual slave labor. The average schmo who buys into Dobbs' simplistic rants probably thinks that China's teeming masses are plotting to steal our decent jobs so that they can do them for 30 cents an hour. And  that they're skimping on poison for their own kids so ours are more quickly contaminated. And that they want to kill our pets so that they can eat them. Don't try to figure them out, the fuckers are inscrutable. Anyone who's ever seen a Warner Oland Movie can tell you as much.

When you think about it, Dobbs really should admire the Capitalist-Communist Chinese. After all, they, too, have no problem repeating propaganda until it reaches the point of brainwashing. It's a foolproof technique -- how do you think Joe McCarthy managed to train young Lou Dobbs to always say "Communist China?"

The nuanced but plain truth is that foreigners are just people like us. Thanks to globaliation, like us, they're getting screwed over in a rigged game that's run by authoritarians for the benefit of a few fat cats -- fat cats who needn't fear getting a bad bag of Mao Mix. I'm sick of Dobbs' faux populism and genuine hate mongering. Sooner or later we'll fight globalism with globalism and redefine populism to include regular folks from everywhere. And then  we'll unite the victims of capitalists and communists and xenophobes in the cause of justice for all.