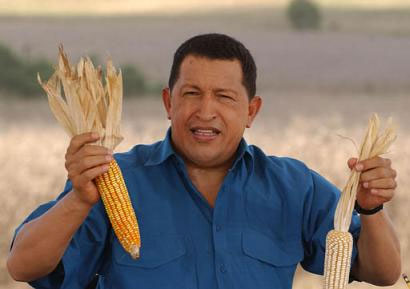 I was watching MSNBC early this morning and felt lucky. Never fear, I wasn't placing any long-shot bets that I would somehow derive information of any value 15 hours before Countdown aired. Nah, I was tuned in for the same reason I always watch the alleged news-- to look for disinformation and see what needed to be refuted. After the story of the Wisconsin cop mass murder (too bad he didn't have another cop with him to say the kids reached menacingly into a pizza box) my breakfast was served.

On the cable network's First Look, a CNBC report about Ciudad del Este, Paraguay was run and teased several times. It was a scary story but not because I felt in any way threatened by the fact that it started by informing us that knockoff products are freely available there. Hell, if there truly is honor among thieves perhaps their counterfeit blue jeans aren't made in sweatshops. I was even undaunted by the assertion that the city is dangerous because it's in the Tri-Border Area near Brazil and Argentina. That's how those South American countries are, one borders the next, and sometimes various countries can border two others in a relatively small area -- oh, when will the madness end?!

I wasn't even scared when they brought up a couple of anti-Semitic bombings in Argentina in the Nineties as proof that the area is rife with Hezbollah and al Qaeda-fortified terror groups. No, the scary part of the story was that it was itself a knockoff. The same story that you could have read in the New York Times, Los Angeles Times, Washington Post , New Yorker or countless wire disservice accounts was once again getting run up the flagpole to see who'd heil. It was garden variety fear mongering meant to jangle our nerves because people have moved from the Middle East and resettled in Ciudad del Este -- the new boogie man capital of the Western Hemisphere. And it's a mere twelve-day drive to the Texas border! Get your duct tape and plastic sheathing ready! None of the mainstream accounts suggest that any Middle Eastern emmigrants left their homelands to flee turmoil. No, the conclusion we are supposed to draw is that they are just there to spread the sinister cause of Islamofayeacism (pronounced withTexas twang for proper effect.) Mix this bigotry du jour with classic verbal winks and nods about "lawless border towns" that call to mind Latino banditos and the uninformed viewer or reader is ready for meathead tenderizing.

So I felt lucky because I knew the piece was bullshit the instant I saw. I have the great good fortune to understand that anything this side of a soccer score that the corporate media reports about South America is either nonsense or even worse, propaganda planted by the Bush-Cheney junta. I know this because I get good information on the area from the authentic journalists at Narco News and World Turned Upside Down. I was ready for this story in particular because as a reader of EXTRA!, the excellent magazine published by media watchdog saints, Fairness and Accuracy In Reporting (FAIR), I'd just read a preemeptive refutation of the hogwash that was polluting my television screen.

The October EXTRA! includes City of Terror by April Howard and Benjamin Dangl. Howard and Dangl are the driving forces behind World Turned Upside Down. The report recounts their recent visit to Ciudad del Este. It reveals a much different story than the one that echoed on MSNBC this morning. It allows that there is a criminal element in the area. There are narco traffickers and gun runners and peddlers of designer goods of questionable provenance. But there are also kids playing ball, people fishing and vacationers snapping photos. So fit could be New York or Chicago or Los Angeles. City of Terror also discusses something else omitted by MSNBC: US military presence in the area and the Paraguayan government's assaults on progressive political movements that are organizing campesinos.

Paraguay is one of a dwindling number of the continent's countries still closely tied to the US government. As such, it's being fortified to not only withstand the assault of democracy but also to serve as a staging area for the fight to reverse democratic gains in neighboring countries. Since the Bush regime is involved, they are labeling anyone not in collaboration with the oppressive status quo as "terrorists." What a surprise, huh? Recently Paraguay took the draconian step of criminalizing protest under the guise of anti-terrorism. That's the first thing them al kadees do is march peaceable-like!

Although most stories about the terrorist border townArgentinean bombings as if they happened last week, and are irrefutably linked to Osama himself, please remember the despicable acts occurred well over a decade ago. They've never been linked to any group or anyone. Period. Let's face it, unless all those reports of Nazis escaping to South America were as fanciful as the yellow journalism MSNBC was piping into our homes this morning, anti-Semitism is nothing new in the region. That said, South America is becoming decidedly unfriendly to fascists, whether homegrown or on the lam. There's a continental shift to the left that's creating a larger and larger schism between Washington and local capitals. The democratically supported movements trying to make life livable for the workers rather than just more obscenely opulent for local oligarchs and international slave-drivers threaten the hell out of the powers that be. It's no coincidence that the MSNBC piece was produced by CNBC, its sister financial news outlet. The big money is watching this story. And big money is threatened by the shifts that mean workers will have more of a say in what is done with the abundant produce that grows and is harvested as a result of their honest toil. And big money is threatened when Bolivia's vast gas reserves are no longer available at a cut rate because it's no longer a matter of buying off a few wealthy families and swooping in. The monied tremble because, while the US has been debunking the myth that it is an unassailable super power with its blundering war and occupation of Iraq, the people of South America have been busy learning how to say "the jig is up" en espanol.