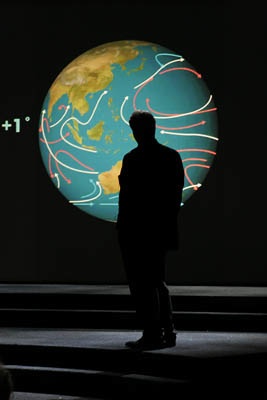 Al Gore allegedly made nine mistakes concerning global warming in An Inconvenient Truth. Bush has only made one mistake about it -- denying it. But of course those damned liberals in Sweden and Norway gave Gore the Nobel Peace prize.

And Hillary Clinton's campaign has announced that all of Clinton's future stump speeches will be delivered from a hydraulic lift.

So how long before reactionaries respond and award Bush and Cheney the Noble War Prize?

You have to figure Halliburton could come up with a truckload or two of cash to fund the award.

I'd like to read that citation : Even in the face of cold hard facts and without regard for their own consciences or place in history, the intrepid Bush and Cheney went ahead and invaded Iraq anyway....

No doubt Tom Friedman would present it.

FOX News Anchor John Gibson commented on this week's school shooting in Cleveland by saying. " He killed himself. Hip-hoppers do not kill themselves. They walk away. Now, I didnt need to hear the kid was white with blond hair. Once hed shot himself in the head, no hip-hopper.
And I could tell right away cause he killed himself. Black shooters dont do that; they shoot and move on" Sometimes it takes but little bit of information to draw a conclusion. For example: all I needed to do was read Gibson's statement to know that he is a racist maggot.

Gibson must have been so disappointed when the shooter turned out to be white. But his faith in white supremacy was restored when the gunboy did the right thing and killed himself.

The shooter deserved to die... if only for restricting Gibson's chance to harp about blacks.

And I'm sure that he was relieved to learn that it was a white kid who deprivedpolice out of a chance to shoot him.

Gibson has finally broken his silence about his biggest concern: the disappointing number of African-Americans suicides.

Gibson feels the unwillingness of blacks to end their own lives hurts our nation in many ways. For instance: it's a major contributing factor in the decreased number of African-American volunteers in our military.

And it must get on Gibson's last nerve to realize how ideally suited gang-bangers who "just shoot and move on" would be to the Bush-Cheney war effort.

Imagine what Gibson would have said if a black student had gone in and shot up a predominantly white high school.

Chrysler's UAW workers went on strike for six hours Wednesday. That's not a strike, it's a fire drill.

Chrysler employees who were on restroom breaks when the strike was called didn't get back to their work stations until after it was over.

The UAW apparently patterns its actions on the speed dating model.

The mini-strikes against GM and Chrysler must really have Ford quaking.

Ford management has to decide if it can afford 12 minutes of downtime on the Explorer assembly line.

In preparation for the monumental showdown, Ford is installing new revolving door employee entrances at all its plants.